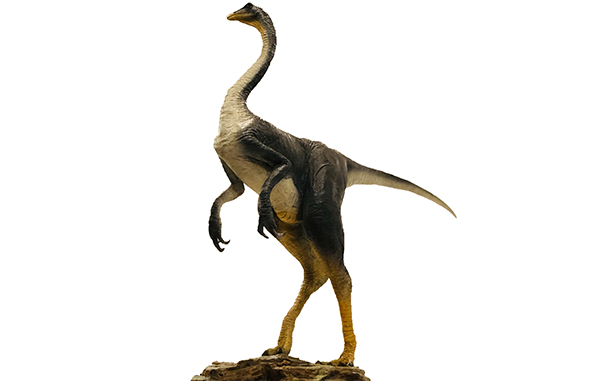 Our honored prehistoric beast is the Arkansaurus. Known to paleontologists as Arkansaurus “fridayi,” it was named in honor of Joe B. Friday who discovered its foot bones in a gravel pit on his farm near Lockesburg (Sevier County) in southwestern Arkansas during the summer of 1972. These remains from the distant past eventually ended up in the hands of Dr. James Harrison Quinn, a University of Arkansas geology professor, who cleaned and reassembled them and then crafted clay approximations of the missing pieces. The resulting foot, a little over 24 inches in length with sharp claws at the ends of its three digits, was compared to the skeletons of similar dinosaurs to determine significant details about this creature which lived anywhere from 100 to 145 million years ago during what scientists call the Early Cretaceous period.

Arkansaurus, a two-legged, bird-like carnivore, stood at least 6 feet tall and probably reached a full-grown height of 15 feet or more. It apparently ate smaller animals, their eggs, and insects, and perhaps plant matter as well. A long, slender neck led to a small head housing a surprisingly big brain, giving it a level of intelligence equal to that of today’s ostrich or emu. With its especially prominent eye sockets, Arkansaurus most likely had superior vision and may well have been able to discern colors. Possessing elongated front limbs and opposable digits on its three-digit “hands,” this dinosaur could grasp its prey. A replica of the fossilized foot can be viewed at the Arkansas Geological Survey’s offices in Little Rock.

A decade after the discovery of Arkansaurus, another dinosaur-related revelation surfaced about 25 miles east of Lockesburg at Weyerhaeuser’s Briar Plant gypsum mine near Nashville. Not dinosaur bones, but dinosaur tracks. Enormous footprints (26 inches wide and 26 to 28 inches long), and thousands upon thousands of them — perhaps the largest dinosaur trackway in the world. The prints were left about 100 million years ago in the Early Cretaceous period by a host of dinosaurs, most of which have been identified as sauropods (huge long-necked, long-tailed vegetarians that walked on all fours). This part of the world, hot and swampy at the time, was a muddy shoreline of the ancient Gulf of Mexico. The tracks, left in soft sediment, were filled by clay deposits and eventually covered by limestone, preserving them for eons. The Arkansas Geological Survey also displays casts of these gargantuan tracks for the public’s inspection.

Yet another significant discovery at this same property occurred in 2011. In addition to tracks similar to those found earlier, researchers also recorded footprints (one foot wide and twice that long) of a three-toed dinosaur, probably the Acrocanthosaurus atokensis, a predator of the first rate. Not only was this a large animal (up to 38 feet in length) and heavy (weighing in at 6 tons), it stood upright on two legs with a long, thick tail counterbalancing its body and head. That head was especially formidable with the upper jaw alone displaying 38 curved and serrated teeth. This sharp-toothed meat-eater likely preyed on young sauropods and other species which also lived in the area.

Next time you’re driving in the Nashville/Lockesburg area in southwestern Arkansas, pull to the side of the road, shut your eyes for a couple of minutes, and imagine that you’re standing on the shoreline of a much earlier (and much larger) Gulf of Mexico, gazing across the shallow sea. A forest of strange bushes and trees rises behind you. The ground begins to shake and a sudden racket to the rear grabs your attention. You spin around — and can hardly believe your eyes. The largest animal you’ve ever seen, a gigantic sauropod — some 20 feet tall at the shoulder (with a neck extending another 30 or so feet) and more than 100 feet from head to tail — lumbers from a thicket, seeking refuge in the water. Nipping at its heels is a much smaller dinosaur, the dreaded Acrocanthosaurus atokensis, arguably the most fearsome carnivore the world has ever known. This dueling duo is getting closer and closer before the rush of a passing 18-wheeler brings you back to the 21st century. But that mental image of those massive prehistoric beasts, a gripping scene straight from a science fiction movie, won’t go away.