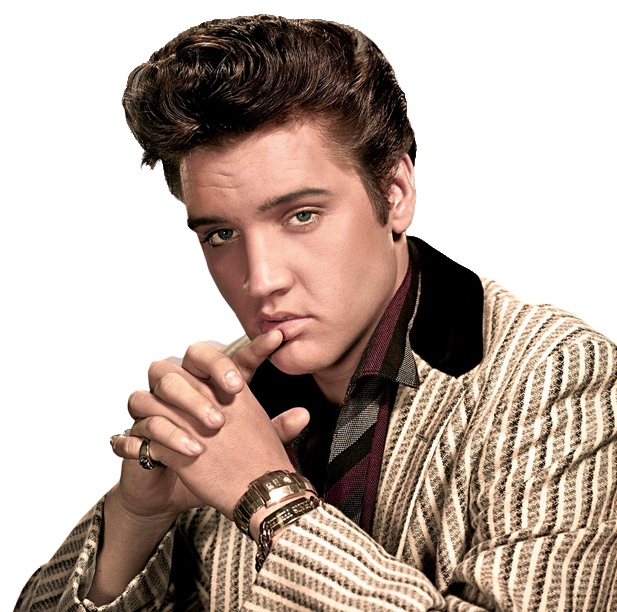 By Joe David Rice
Elvis Aaron Presley was born in Tupelo, Mississippi, and later claimed Memphis, Tennessee, as home. But in the early days of his career, when he was still a mere prince rather than the King, Presley spent a surprising amount of time on Arkansas stages — usually in the eastern and southern sections of the state.
Take his 1955 tour schedule: On January 8, less than a week after his 21st birthday, Elvis performed at the Catholic Club in Helena and then sang the following night in Marianna. His February appearances included stops in Little Rock, Camden, Hope, Pine Bluff and Texarkana. In early March, Elvis had two shows in Newport and another in Helena. March 21 found him in Parkin, and four days later, he appeared in Dermott. On March 23 — in between those two concerts — Elvis and his band auditioned, unsuccessfully as it turned out, for the Arthur Godfrey’s Talent Scouts show in New York. Later that same month he performed in El Dorado.
That El Dorado gig made a lasting impression on Bob Phelps, retired director of the state’s Keep Arkansas Beautiful program. Phelps, a senior that year at El Dorado High, was active in the school’s drama program and had been assigned to handle the curtain and make introductions. When Phelps met Elvis backstage, he asked if he’d prefer a slow curtain or a fast curtain. “Doesn’t matter to me,” Elvis said. “I just want to play some music.”
So, Phelps stepped to the microphone and said, “Ladies and gentlemen. Let’s give a warm El Dorado welcome to Elvis Presley!” As Phelps opened the curtain, a resounding chorus of boos and catcalls and a barrage of thrown objects immediately greeted Elvis and his band. According to Phelps, the audience included a tough crowd of rednecks, roughnecks and lumberjacks who resented Elvis’ pretty-boy looks and the local girls’ infatuation with the rising star. Quickly closing the curtain, Phelps turned to Presley — who had a shocked “deer-in-the-headlights” gaze — and asked if he wanted to continue. Shrugging, Presley said, “I’m here to play music.” Phelps stepped to the microphone, said “Let’s give a warm El Dorado welcome to Elvis Presley, straight from the Louisiana Hayride!” and again pulled the curtain open. Once more the musicians were subjected to a cacophony of jeers and a fusillade of debris.
Undeterred, Elvis kept singing and gyrating and the raucous fans soon ran out of anything to throw. By the time the concert was over, Elvis had converted most of those in the audience. He spent the night in downtown El Dorado’s Garrett Hotel (now gone) and, apparently, he wasn’t alone. One of Phelps’ classmates showed up at school the next morning, announced that she and Elvis were now engaged and proudly displayed a gaudy piece of costume jewelry on the ring finger of her left hand.
Elvis made 15 more stops in Arkansas that year, sometimes giving two concerts an evening: one at 7:00 PM and the next a couple of hours later. His fall schedule almost defies imagination: During September, for example, Elvis made 22 appearances during the first 22 days of the month.
In an interview between sets at one of his Little Rock concerts in Robinson Auditorium, Elvis identified Kim Novak as his favorite female movie star and Marlon Brando, James Dean and Richard Widmark as his top male actors. Regarding his musical tastes, Elvis said, “I like rock and roll, hillbilly, pop, some classical. I like anything if it’s good.” When asked about his unique performance style, Elvis answered, “I just happened upon it accidentally. I’m a pretty close follower of religious quartets. They do a lot of rocking river spirituals. That’s where I got the idea from.”
The reporter also queried his guest about the future of rock and roll. Elvis replied, “Rock and roll has been in for about five years. I’m not going to sit here and say that it’s going to last because I don’t know. But all I can say is that it’s good. The people like it and it’s selling. It might change like years ago when the Charleston was real popular. Maybe four or five years from now rock and roll will be dead.”
Dyed-in-the-wool Elvis fans might want to consider a pilgrimage to Fort Chaffee outside Fort Smith. On the grounds of this former Army base is possibly the world’s most famous barbershop — the very chair where in 1958 Elvis got his highly publicized GI haircut. Authentically restored to the way it looked when Elvis walked through the door, the museum also features a fascinating assortment of memorabilia from his stay at the camp. Elvis may have left the building, but it’s still a fine photo opp.
________________________________________________________________________________________________________________
Joe David Rice, former tourism director of Arkansas Parks and Tourism, has written Arkansas Backstories, a delightful book of short stories from A through Z that introduces readers to the state’s lesser-known aspects. Rice’s goal is to help readers acknowledge that Arkansas is a unique and fascinating combination of land and people – one to be proud of and one certainly worth sharing.
Each month, AY will share one of the 165 distinctive essays. We hope these stories will give you a new appreciation for this geographically compact but delightfully complex place we call home. These Arkansas Backstories columns appear courtesy of the Butler Center for Arkansas Studies at the Central Arkansas Library System. The columns will be collected and published in book form in late 2018 by Butler Center Books.