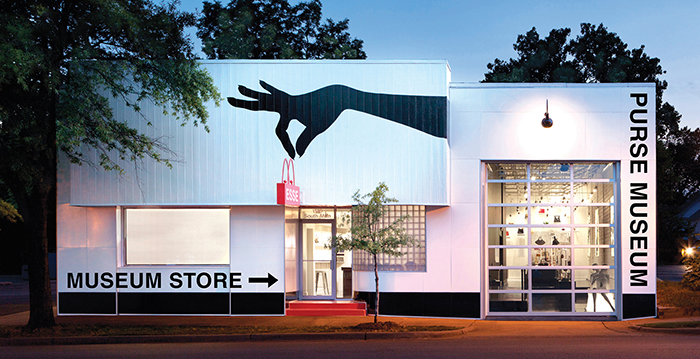 Given that “esse” is a Latin word, most of us are completely unfamiliar with it and fewer still are able to gracefully work it into the occasional conversation. Esse — and I had to look this up — is a noun that roughly translates into “existence” or “essential nature” or “to be.” Take your pick.

But I suspect it’s going to become more commonly recognized, thanks to Anita Davis and her Esse Purse Museum on South Main Street in downtown Little Rock. Davis chose the word carefully, convinced that a woman’s purse and its contents reflect her life and her spirit.

Opening in mid-2013 and highlighting a collection which began 30 years ago, the museum has already received glowing reviews. But that’s really no surprise since portions of Davis’ treasure trove were part of a very successful 26-city exhibition from 2006 through 2011. In fact, the public’s reaction to the coast-to-coast tour encouraged her to proceed with the museum’s development.

Davis grew up in Murfreesboro, the only daughter of a well-to-do family heavily involved in southwest Arkansas’ timber industry. She fondly recalls accompanying her mother on shopping trips to Hot Springs where they examined the latest trends in the high-end boutiques along Central Avenue. Those experiences helped Davis develop her own sense of style — an appreciation of beautiful things combined with a certain rebellious touch.

Although her collection includes about 4,000 purses, Davis has chosen some 250 to display in the museum — representing a truly spectacular array of styles and materials. Consisting mainly of 20th-century handbags arranged decade by decade, the Esse Purse Museum also highlights typical contents of the bags: compacts, lipstick, ration cards, gloves, wallets, cigarette cases, medications, the occasional flask, opera glasses and so on.

A walk through the museum brings back memories for women and men alike, recalling the purses of their grandmothers, mothers and sisters. It provides a fascinating look not only at fashion but American society for the past century. I spent a little over an hour touring the museum with my sister and mother and, like them, eagerly moved from one exhibit to the next, amazed by the designers’ constantly evolving creativity. The guest ratio of about 10 women to every man didn’t bother me a bit.

I especially enjoyed the written explanations next to the display cases. This paragraph, in particular, caught my attention:

“Just as the essence of a woman is not her appearance, size, shape or hair color, the essence of a woman’s handbag is not its style, price, designer logo or color. The essence of both are the things they carry, literal and ethereal — the makeup and memories, the driver’s license and the driving desires, the hairbrush and the hope, the wallet and the wishes, the lotion and the love.”

There’s another matter which should be mentioned. The Esse Purse Museum is one of only three such institutions on the entire planet — and the sole example in the Americas. The others are in Amsterdam and Seoul. These three distinguished cities — located on three separate continents — each possess that one cultural collection close and dear to every woman’s heart: a purse museum.