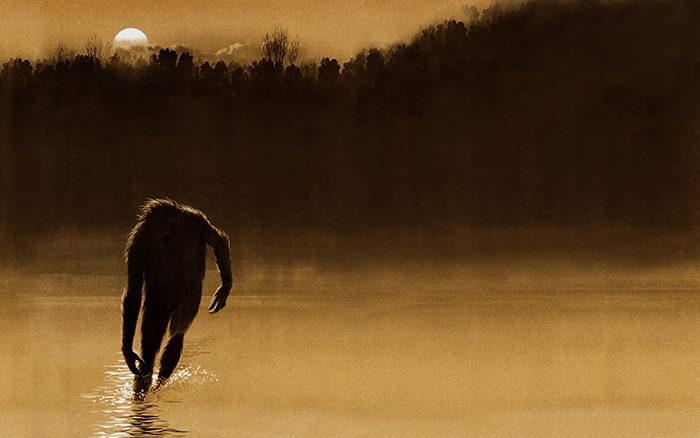 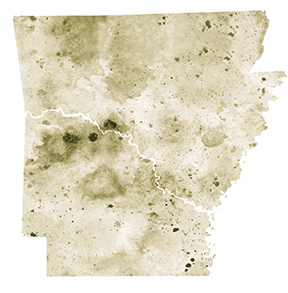 Cryptozoologists have been busy in recent years. They’ve traveled to Nepal and Tibet hoping to track down the Abominable Snowman, to Scotland looking for its Loch Ness Monster and to the Pacific Northwest seeking Bigfoot.

A select few have spent time in Arkansas searching for two similarly elusive creatures. One, the White River Monster, is described as a denizen of the state’s northeastern quadrant while the other, the Fouke Monster, reportedly resides in the wilds of southwestern Arkansas.

This latter beast is named after the city of Fouke. The Miller County community lies 15 miles south of Texarkana on U.S. 71. Fed by several tributaries (that include Boggy Creek), the Sulphur River meanders across the tip of the state’s southwest corner, winding through one of the last large stands of bottomland hardwoods in the region. The Arkansas Game & Fish Commission warns visitors of limited access to this dense maze of heavily forested lowlands and strongly recommends using maps and compasses. It’s not unusual for even experienced hunters to get lost in this swampy labyrinth.

The remote backwoods of the Sulphur River bottoms are indeed desolate and primeval. After exploring the area, Lyle Blackburn, author of The Beast of Boggy Creek, writes, “if there were such a place to hide a throw-back to the time when ape and man occupied a close proximity to the branches of life, this particular spot must surely rank near the top.”

Although the Fouke Monster first came to the media’s attention in 1971, legends of a mysterious creature in that isolated corner of Arkansas can be traced back for decades. Researchers have found a sketchy, 1856 account of a wild, hairy man attacking a settler in Sevier County. Fast forward a century or so and periodic reports of a strange man-like animal in the Fouke area were quietly shared among the local populace.

But it was a series of bizarre incidents covered by Texarkana Gazette journalist Jim Powell during the spring and summer of 1971 which put Fouke on the map. In late April of that year, strange things began to occur at the home of Elizabeth and Bobby Ford, who’d recently moved to Fouke. On Saturday night, May 1, they experienced a confrontation straight out of a nightmare. A large smelly and hairy creature – said to be about seven feet tall, red-eyed and walking upright – reached through a living room window, startling Elizabeth. Several shotgun blasts apparently ran the beast off.

The Fords called the town constable who loaned them a powerful flashlight and another shotgun. Soon after the officer left around midnight, the creature returned and kicked in the back door. Bobby fired again and, thinking he’d hit the beast, stepped from the back porch. He was walking across the backyard “when the thing grabbed me,” Bobby says. “I felt a hairy arm come over my shoulder and the next thing I knew we were on the ground.” Fighting for his life, Ford escaped from the monster and dashed to the front of the house. “I was moving so fast I didn’t stop to open the door. I just ran through it.”

Early that morning Bobby was driven to Texarkana’s St. Michael Hospital where doctors treated him for scratches (“deep claw marks,” according to one source) and shock. County officials visited the scene at daylight and discovered a series of large but unidentifiable tracks along with exterior damage to the house. Terrified, the Fords rented a trailer and moved away that afternoon.

Three weeks later, Mr. and Mrs. D.C. Woods, Jr. and Mrs. R.H. Sedgass, all Texarkana residents, nearly collided with what appeared to be a “giant monkey” as they drove a few miles south of Fouke on U.S. 71. Running upright, the large, hairy creature vanished into the darkness.

In mid-June, a farmer noticed a set of unusual footprints in his soybean field near Boggy Creek. The sheriff, game warden, constable and others investigated the tracks, determining they were 13.5 inches long and 4.5 inches wide with three toes. The prints led into nearby woods where broken limbs indicated a tall animal had crashed through the trees.

Additional reports streamed in which included one filed by a deputy sheriff who narrowly missed hitting a tall, hairy creature while on patrol. Caught in the headlights, the beast bounded across the road in several long leaps, cleared a fence, and then disappeared into the brush.

Meanwhile, Charles B. Pierce, owner of a Texarkana advertising agency, had observed the curious goings-on with interest. Using a 35-mm camera, a modified gorilla suit and a $100,000 loan from a client, he produced an 87-minute film, The Legend of Boggy Creek, which combined reenactments of the alleged events with interviews of locals who’d encountered the beast. Following its August 18, 1972 world premiere in Texarkana, this “horror docudrama” became a drive-in hit and ultimately grossed over $25 million.

We may never know the full story about the Fouke Monster, but sightings continue with at least a dozen occurring in the 21st century. And, as cryptozoology adviser Lyle Blackburn notes, the wild country around Fouke is “the kind of place that a monster could only dream of.”