I’m a bit puzzled whether to write this piece in the present or past tense. But being an inherent optimist, I will make a leap of faith and assume – and fervently hope – this iconic bird still exists in the wilds of Arkansas.
Called “the great chieftain of the Woodpecker tribe” by John James Audubon, the ivory-billed woodpecker is among the largest woodpeckers on the planet with a 30-inch wingspan and reaching a length of 20 inches. These distinctive birds are shiny blue-black with white trailing edges on their wings and white markings on their necks. Crests on the males are black with an abrupt transition to vivid red on the side and rear, while crests on females and juveniles remain black. Eyes are brilliant yellow and the long chisel-like beaks are, of course, ivory colored.
Audubon frequently spotted ivory-billed woodpeckers on his 1820 and 1822 excursions through eastern Arkansas, noting the bird “constantly resides, breeds and passes a life of peaceful enjoyment, finding a profusion of food in all the deep, dark, and gloomy swamps.” While he observed them eating wild grapes, hackberries and persimmons, their primary source of food was beetles, larvae and large grubs they found under the bark of dead trees. Audubon saw the birds knocking down strips of bark up to eight inches in length with single blows from their strong bills while searching for food, sometimes denuding 20 to 30 feet of tree trunk over the course of a few hours.
The brightly plumed heads of the male ivory-billed woodpecker worked against the birds’ survival. Native Americans frequently incorporated the rich scalps in their war dress and hunters used them for shot pouches. According to Audubon, it was common to see vendors displaying heads of male ivory-billed woodpeckers at steamboat landings, selling them at the rate of two or three for 25 cents.
And the woodpeckers’ habitat requirements have also contributed to their undoing. The thick hardwood swamps and extensive piney woods common across the South prior to the Civil War began to disappear as the country’s demand for agricultural land grew. Compounding the problem is that each nesting pair needs nearly 10 square miles of territory to find enough dead and dying trees to feed themselves and their young.
The ivory-billed woodpecker was thought to be extinct by the 1920s when a pair was spotted in Florida, only to be shot by a local taxidermist. In the mid-1930s, a small colony was found in Madison Parish of northeastern Louisiana on land known as the Singer Tract, but controlled by the Chicago Mill & Lumber Company. Conservationists desperately searched for a plan to protect the area. On November 22, 1943, governors from four southern states (including Arkansas Governor Homer Adkins) wrote the company offering to purchase the land at a fair price and concluding:
“We feel that the saving for all time of the rarest North American bird, the Ivory-billed Woodpecker, and of the finest remaining stand of virgin hardwood timber in the South are matters of great national importance, and of concern to the citizens of our states.”
The reply from the chairman of the Chicago Mill & Lumber Company was short and to the point: “We are just money grabbers,” he wrote. “We are not concerned, as you folks, with ethical consideration.” The forest was cut and the wood was used in the war effort to make tea chests for the British army. And the birds disappeared.
That was pretty much the last news about the bird until a startling announcement by U.S. Department of the Interior Secretary Gale Norton on April 28, 2005: the ivory-billed woodpecker had been rediscovered in the Cache River National Wildlife Refuge of eastern Arkansas. The initial sighting had been made by kayaker Gene Sparling on February 11, 2004, but a team of ornithologists had spent the intervening 14 months working in secrecy to avoid a stampede of birdwatchers. Over a dozen additional sightings occurred during the span confirming, at least for the research team, that the ivory-billed woodpecker once again lived in Arkansas. The Department of the Interior announced a $10 million plan for the protection and recovery of the rare bird.
Most of the birding community was ecstatic upon hearing the news. Other authorities, however, refused to believe the ivory-billed woodpecker had been spotted. They argued that the one video clip was inconclusive, and that subsequent sightings had actually been of the fairly common pileated woodpecker which, although considerably smaller than the ivory-billed, bears some similarities in appearance.
Thousands of hours have been spent in the Cache River bottoms by dozens of people, all hoping to obtain definitive proof the ivory-bill is still around after all these years. Although scientists installed decoys, cameras, and tape recorders to capture conclusive evidence, they’ve yet to enjoy any luck.
I spent a few hours a couple of years ago canoeing in the Cache River National Wildlife Refuge, quietly praying to see the famous bird. My appeal went unanswered. But after paddling through the watery maze of tupelo gums and cypress where visibility was often less than 20 feet due to the thick vegetation, I can readily appreciate the difficulty in spotting such an elusive creature in a 65,000-acre tract. Meanwhile, I am maintaining the faith.
_____________________________________ 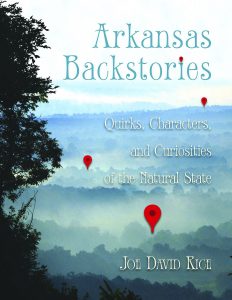 Joe David Rice, former tourism director of Arkansas Parks and Tourism, has written Arkansas Backstories, a delightful book of short stories from A through Z that introduces readers to the state’s lesser-known aspects. Rice’s goal is to help readers acknowledge that Arkansas is a unique and fascinating combination of land and people – one to be proud of and one certainly worth sharing.
Each month, AY will share one of the 165 distinctive essays. We hope these stories will give you a new appreciation for this geographically compact but delightfully complex place we call home. These Arkansas Backstories columns appear courtesy of the Butler Center for Arkansas Studies at the Central Arkansas Library System. The essays will be collected and published by Butler Center Books in a two-volume set, the first of which is now available.