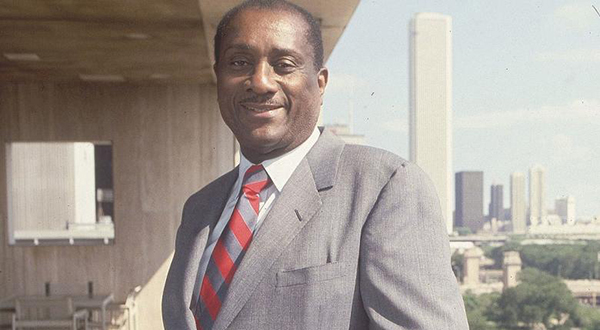 Few individuals have overcome the challenges of the late John Johnson of Arkansas City. A third-generation descendent of slaves, Johnson was born on Jan. 19, 1918, in a shotgun house three blocks from the Mississippi River. His father worked as a laborer in a sawmill, and his mother was a camp cook. Shortly after his father’s death in an accident at the mill, the 9-year-old Johnson and his mother faced another daunting setback: the Flood of 1927. In Succeeding Against the Odds, his 1989 autobiography, Johnson wrote about the sheer terror of the breaking levees:

“And now we were running and the water was coming behind us and dogs were barking and people were screaming and my mother was gripping my hand so hard I thought it would come off. Would we make it? Or would the rampaging water roll over us, as it was rolling over the mules and chickens behind us? For a terrifying moment, the issue was in doubt. Then my mother shifted into a higher gear, lifting me almost off the ground, and we scrambled up the slippery incline of the levee.”

Johnson and his mother spent the next six weeks camped atop the Arkansas City levee, along with hundreds of other refugees. From their vantage point on the narrow strip of dry ground, they watched the dark, swirling flood waters cover the tin roof of their home. When the murky waters finally receded, they found that the force of the current had moved their battered house — full of nasty muck and unwelcome creatures — several blocks from its original site.

That same year, Johnson’s mother remarried. His mother and stepfather instilled a strong work ethic into young Johnny — he learned how to cook and wash and iron clothes — and they encouraged him to excel in school. Unfortunately, formal education for Black students in Arkansas City ended with the eighth grade. Johnson’s mother, convinced that her son deserved a good education, was determined to save enough money for them to relocate to Chicago where opportunities were far better. But when he had completed his eighth-grade assignments, she didn’t have enough cash for them to make the move. Her answer was for Johnson to repeat the school year while she continued to set aside every dollar she could find. In July of 1933, following his second eighth-grade tour of duty, mother and son caught a ride to McGehee and then took the train to Chicago — by way of Little Rock, Memphis and St. Louis. Johnson was 15 years old. His stepfather made the same journey several years later.

The transition from Arkansas City to Chicago wasn’t easy. His Southern accent worked against him and so did his rural wardrobe. While his mother was able to obtain better clothing, Johnson spent hours reading self-help books and practicing his elocution in front of a mirror — and then decided the real answer was to study harder than any other student at Wendell Phillips High School. The dedication paid off when he was elected senior class president and also served as editor of the Phillipsite, the school newspaper. After Phillips High burned, students were transferred to the new DuSable High School. Graduating on June 11, 1936, Johnson was the only student to speak during the commencement exercises. One of his mentors had pulled him aside earlier, suggesting that “John” would be more appropriate than “Johnny” in the days to come. It was then that he added “Harold” as his middle name.

Harry Pace, president of the Supreme Liberty Life Insurance Company, hired the new graduate as a part-time aide for $25 a month. Johnson began working on the company’s newsletter, The Guardian, and by 1939 was its editor. Among his tasks were weekly briefings with Pace, bringing him up-to-speed on what was happening in the world of race relations.

In one of those rare “ah-ha!” moments, Johnson realized he was in the perfect position to launch a publication aimed at Black readers. But no one was willing to loan startup capital of $500 to an unproven 24-year-old African American until the Citizens Loan Corporation came through — provided he had collateral, a term unfamiliar to Johnson. After nearly a week of crying and praying, Johnson’s mother agreed to put up her new furniture as a guarantee for the loan.

Johnson set up a desk in a corner of a friend’s office, composed a letter inviting recipients to subscribe to Negro Digest for $2 a year, and used the $500 to buy stamps for the 20,000 names on the mailing list he’d borrowed from the Supreme Life Insurance Company. Three thousand people responded, and the first issue of Negro Digest hit the streets on Nov. 1, 1942. Less than a year later, the magazine’s circulation reached 50,000 monthly and held at that level until the October 1943 issue. A cover story by First Lady Eleanor Roosevelt that month boosted circulation to 100,000 and, according to Johnson, “We never looked back.”

John Harold Johnson parlayed that success into not only a fabulously successful media career (he also published Ebony and Jet magazines and held broadcast interests) but ventured into cosmetics and fashion. As his empire expanded, Johnson had trouble renting office space in New York City, apparently because of his race. He telephoned an Arkansas friend named Winthrop Rockefeller, who made one call and got Johnson the accommodations he needed in Rockefeller Center.

Johnson, the first African American to make Forbes’ annual list of the 400 wealthiest Americans, received the Presidential Medal of Freedom from then-President Bill Clinton, another Arkansas friend, in 1996. His restored home in Arkansas City is open to the public.