Arkansas is blessed with many large and attractive lakes — impressive bodies of water, such as Beaver, Bull Shoals, DeGray, Greers Ferry, Norfork, Ouachita and others. But Lake Chicot, in the state’s southeastern corner, is unique among this impressive lot.

Not only is it easily the largest natural lake in Arkansas, it’s the largest oxbow lake in North America. Formed when the nearby Mississippi River changed course several centuries ago, the 5,300-acre, C-shaped lake is nearly 22 miles long and about a mile wide. Lined with cypress trees, it’s long been a favorite destination for photographers.

The lake has had a troubled past, beginning about a hundred years ago. A system of canals and ditches combined with changes wrought by the Flood of 1927 led to the discharge of sediment-laden runoff into the lower three-fourths of the lake (the upper quarter was protected by a weir installed by the Arkansas Game and Fish Commission in 1948). What had been a crystal-clear fisherman’s paradise was quickly transformed into a muddy, silt-clogged body of water. 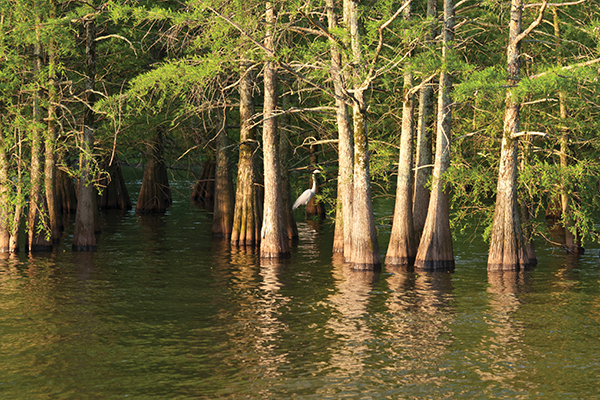 Things changed in 1985 with operation of the new Lake Chicot Pumping Station which diverts undesirable runoff using a dozen 3,100 HP motors, which together can move 6,500 cubic feet of water a second. Located on Connerly Bayou, a few miles north of the lake, the huge facility (eight stories tall; big as 1.5 football fields) includes a visitors center complete with informative displays. Although costly — the final tab ran nearly $90 million — the project has returned Lake Chicot to its former glory.

Now that the lake’s water quality has been restored, birds are back — and so are birders. Recognizing its valuable Mississippi River Flyway habitat, the National Audubon Society has given Lake Chicot the coveted “Important Birding Area” designation. Dozens of waterfowl and shorebirds can be spotted on the lake, including the relatively rare wood stork. At last count, some 285 species have been observed in the area.

A good place to view the birds is Lake Chicot State Park, a 220-acre complex located on the lake’s north end. With 14 cabins, over 125 campsites and fascinating interpretive programs (to include barge tours through cypress swamps), the park is one of the undiscovered secrets of southeastern Arkansas.

Lake Village, the historic county seat of Chicot County, sits on the west side of the lake. Legend has it that the remains of famed Spanish explorer Hernando de Soto were buried in the vicinity in 1542.

A couple of miles south of Lake Chicot is another of the area’s lesser-known attractions: Lakeport Plantation, an 8,000-square-foot Greek Revival mansion dating from the late 1850s. The 17-room, two-story home, constructed largely from local cypress timber by slaves, sits at the base of the Mississippi River levee, facing the river. Following an extensive renovation process by Arkansas State University, Lakeport once again welcomes visitors.