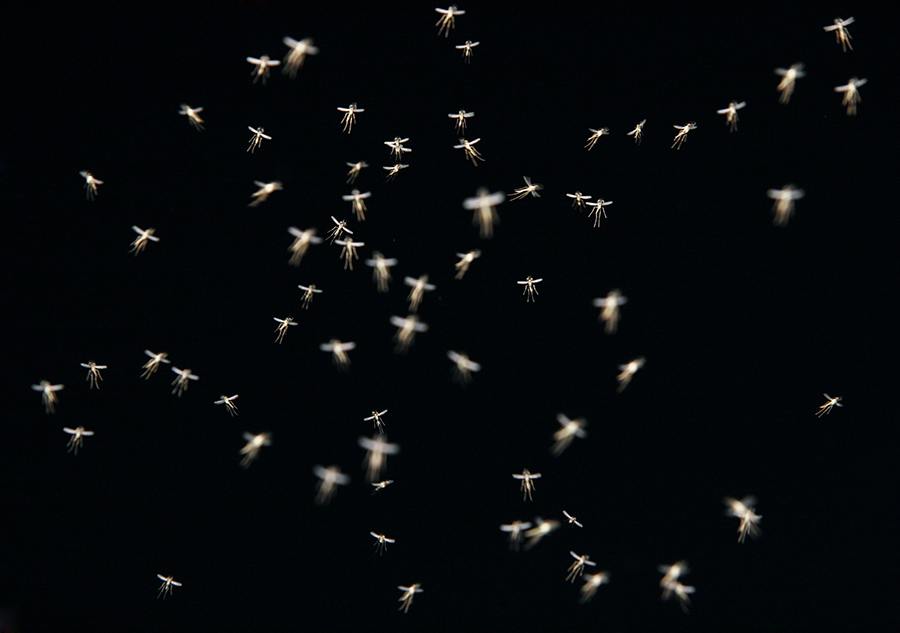 “Ideal conditions are found in Arkansas for the development of some of the worst pest mosquitoes found in this country.” So wrote Stanley J. Carpenter, the Arkansas State Entomologist, in a 1941 book, The Mosquitoes of Arkansas, published by the Arkansas State Board of Health. Three-quarters of a century later, Mr. Carpenter’s assessment still rings true.
As a kid growing up in Jonesboro, in the state’s northeastern corner, I was unaware of the good scientist’s observation. But living in a town surrounded by rice fields (fertile breeding grounds for the voracious vermin), I was intimately familiar with the pervasive buzz and then the itchy bites of these annoying insects. Like many of my generation, I can remember bicycling behind the public works truck laying down its summer evening blanket of mosquito fog in my neighborhood, weaving in and out of the billowing clouds of insecticide.
I’ve occasionally wondered if that ill-advised activity might explain certain of my current strange behaviors. But I digress…
In more recent years, I’ve noticed other suggested options for controlling mosquitoes. In particular, the universally accepted and oft-repeated statement that purple martins will consume 2,000 of said insects per day caught my attention. “This figure was originated by me,” proudly notes J.L. Wade, author of What You Should Know about the Purple Martin. Come to find out, Wade was not an ornithologist but an industrialist. He owned Trio Manufacturing, an Illinois-based manufacturing company which produced – you guessed it – thousands upon thousands of aluminum birdhouses for purple martins.
Several prominent ornithologists analyzed stomach contents of hundreds of purple martins – and not a single mosquito carcass was found (they typically consume larger insects such as damselflies, butterflies, and dragonflies). While purple martins, North America’s largest swallow, are indeed beautiful birds and are a desirable addition to every community, don’t count on them to combat mosquitoes. The birds feed during the day while most mosquitoes are at rest. And vice versa.
Scientists have discovered that mosquitoes – and only the females bite – prefer type O blood two-to-one over type A (our bodily secretions give that secret away). They’ve found that mosquitoes are particularly attracted to pregnant women, beer drinkers, dark clothing, strong perfumes, smelly feet and carbon dioxide (in the breath we exhale). And it’s probably to be expected that they’re especially active during full moons.
As for controlling these airborne bloodsuckers, they do indeed have natural enemies, among them dragonflies, water striders, frogs, spiders, ducks, chickens and guineas. Rose-scented geraniums, lemon balm, and even catnip are said to be effective mosquito repellants as are citronella candles. Commercial mosquito traps are available, but results have been mixed, at best.
The best bet for reducing local mosquito populations is to eliminate their breeding areas. Containers capable of holding even small amounts of water for up to a week – such as abandoned pots, empty paint buckets, discarded tires, old wading pools and clogged gutters – can yield bumper crops of these pesky creatures.
I hate to end this piece on a negative note, but there’s bad news on the mosquito front. Arriving via a shipment of tires to a Texas port in the 1980s, the Asian tiger mosquito has now infiltrated over half the 50 states. This species, which is uncommonly aggressive, prefers to feed during the day and is especially drawn to human blood although it also targets family pets and even birds. The Asian tiger mosquito is particularly effective at spreading diseases with at least 20 illnesses on its rap sheet – to include such threats as West Nile fever, dengue fever, yellow fever and two varieties of encephalitis. And, of course, news reports claim it’s only a matter of time before Zika mosquitoes take up residence in the Natural State.
Mosquitoes are like taxes. They’ll take a bite out of you now and then, but with proper planning you can still enjoy your daily routines.