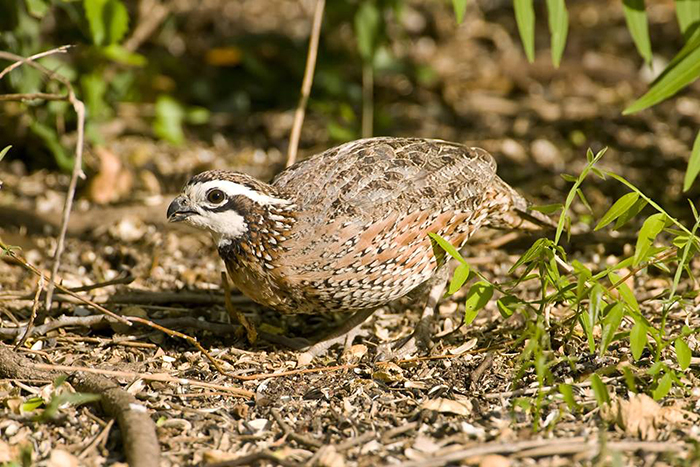 Arkansas has a mixed record when it comes to native birds. The enormous flocks of passenger pigeons and Carolina parakeets which literally darkened Arkansas skies were extirpated years ago, and the fate of the ivory-billed woodpecker remains unknown. Yet the populations of wild turkeys and bald eagles have soared over the past couple of decades.

Falling somewhere in between these two extremes are Northern Bobwhite quail — often simply called bobwhites after their distinctive whistle. At one time, Arkansas was a destination of choice for out-of-state hunters seeking these birds. When Ernest Hemingway made regular trips to the state during the late 1920s and early 1930s to visit his in-laws in Piggott, he hunted quail at every opportunity. In 1931 he and his hunting buddy got their limit of 20 in less than an hour.

Quail populations in the state remained stable through the mid-20th century. On December 1, 1949, the Arkansas Gazette reported, “Quail becomes legal game in Arkansas today and conditions point to one of the best seasons in years. The state Game and Fish Commission sees nothing but nice things in store for what it considers its largest single group of resident hunters.” Biologists expected many of the hunters to have no trouble reaching the bag limit which at the time was eight.

Today’s bag limit is a mere six birds — and few hunters can claim it. The precipitous decline of the state’s quail population is a complex issue. Talk to half a dozen hunters and you’re likely to get six different answers. Feral hogs, pesticides, fescue, kudzu, feral cats and even fire ants have all received some of the blame.

However, there’s no getting around the fact that the loss of habitat is a major contributor. As much of eastern Arkansas shifted to big and more efficient farming operations, the favorite haunts of quail — fence rows, ditch banks, briar patches and small woodlots — were all but eliminated. In other regions of the state, native grasses have been almost universally replaced by fescue and Bermuda grass, neither of which meets the basic requirements of quail.

Bobwhites don’t need much space to thrive. What’s required is the right mix of thickets, open woods and native grasses and weeds. The low-growing vegetation gives the birds food and shelter while the wooded areas allow them to escape by flight.

On several occasions, the Arkansas Game and Fish Commission has attempted to resurrect the state’s quail population. Biologists have pretty much given up on restocking programs, feeling that hardly any of the transplanted quail survive and reproduce. It appears the ultimate solution is working with public and private landowners to develop more — and better — habitat. Where aggressive and continuing efforts have been undertaken to reestablish the diverse bunch grasses, wildflowers, weeds and tangled brushy environment which provides the food resources and cover for quail, the birds have returned.

My most memorable quail experience occurred years ago during a fall expedition in the Ozark National Forest north of Hector. A good friend and I were hiking along the East Fork of the Illinois Bayou when — unknown to us — we stepped in the middle of a large covey. Like a grenade, a dozen or more quail exploded at our feet, flying off in all directions and causing serious heart palpitations for each of us.

If you’re undecided about quail, let me give you a practical reason to support the reestablishment of these fine birds in the Natural State: they love to eat ticks. Communities in the northeastern part of the country have released bobwhite quail in city and county parks in efforts to control Lyme disease, one of many maladies transmitted by ticks.

Let’s close with an excerpt from a 2017 editorial published in the Arkansas Democrat-Gazette: “Several decades ago … country kids sat on decks, porches and in windows as the sun set, watching the world. And they sometimes got pretty good at calling bobwhite quail. With just a few hours of practice, and the help of a big brother or sister, a kid could get the call down pat. And the birds would come right up to the house, calling back all the while. It was a beautiful thing.”

I’m hopeful my children and their descendants will be able to enjoy this same “beautiful thing” in the years to come.