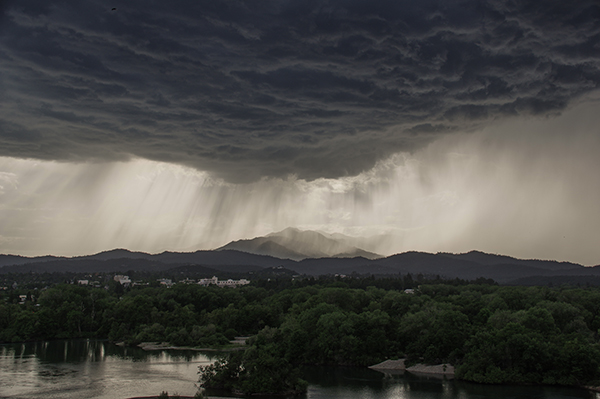 Half a century ago a rainmaker of an altogether different ilk operated across Arkansas. Working from his Chevrolet pickup and dressed in a plaid shirt and blue jeans, Homer Franklin Berry was known to literally “make it rain.” Or at least that was the story.

Born in Mayflower in 1906, Berry joined the United States Air Force, retiring as a major in 1946. After dabbling with inventions and politics — he was an unsuccessful mayoral candidate in North Little Rock — Berry turned his attention to modifying weather. Usually concentrating on producing rain or snow, he also insisted his expertise could deliver dry skies.

Berry’s technique involved a two-fold procedure. First, he soaked lumps of coal or charcoal in a silver iodide solution, a step that turned his hands a bright yellowish-green. He then burned the coal in a customized oil drum (lined with firebrick) occupying the bed of his truck. As he drove over the Arkansas highways, smoke billowed from his weather machine, sending billions of tiny particles of iodide high into the atmosphere where — if things worked as planned — they attracted microscopic bits of water vapor. When enough collected on the particles, they fell to earth as precipitation. “We’ll stop at each little wide spot in the road and do some seeding,” he said. “It’s a slow process. We can’t average but about 25 miles an hour.”

Berry’s concept was based on the pioneering iodide cloud-seeding work of Dr. Irving Langmuir, a Nobel Prize-winning chemist, in the late 1940s. While most meteorologists were skeptical of the theory (and remain so today), Berry had no doubts about its effectiveness and devised his primitive system for seeding clouds.

The major found himself catapulted into the public eye during the summer of 1962. August had been a grim month in Arkansas — drought conditions with day after day of record-breaking temperatures. In a written proposal to the city council, Berry offered to “air condition” the entire community of North Little Rock for $500 a month. A front-page story in the Arkansas Gazette detailed provisions of his comprehensive plan: 1) lowering temperatures by 10 degrees daily for the duration of the summer; 2) raising daily winter temperatures by 10 degrees; 3) eliminating frost and tornado damage; 4) increasing the frequency of rainfall (while keeping to the annual average); and 5) maintaining a desired surface moisture throughout the growing season.

Fearing municipal revenues would plunge by $55,000 a month if residents quit watering their lawns, North Little Rock’s civic leaders ignored the proposal. But local radio station KLRA hired Berry on Wednesday, August 22, agreeing to pay him $500 if he could deliver an inch of rain in Little Rock by midnight, August 26. Berry and his second cousin got to work early on August 23, seeding the atmosphere south and west of the city while driving their rain-making apparatus through Benton, Crows and Paron in Saline County. Little Rock’s skies turned dark about 3:30 p.m. on Friday, and a downpour soon followed. Officially measuring 1.5 inches, it was the first recorded rain in Arkansas’ capital city in 44 days. At a packed news conference broadcast live the next day, KLRA presented Berry with his $500 check. During this media event, Berry promised a “White Christmas,” noting he’d reserved a supply of silver iodide and charcoal for the holiday season.

In an editorial titled “The Rain-maker,” the Arkansas Gazette commented on the deluge: “Despite the warnings of Major Homer Berry, we must confess, we left our raincoat at home just like the rest of the non-believers. And, like the rest, we got wet. Major Homer Berry deserves the community’s plaudits, either for his remarkable science or for his uncannily accurate timing. He said there would be rain between 2 and 4 p.m. and, by Jupiter Pluvius, there it was at 3:30. The man obviously has some influence somewhere, and he is a man it would be well to know in the event things get dry again.”

A few weeks later, the Arkansas Livestock Exposition hired Berry to keep the skies dry during the annual Arkansas State Fair in Little Rock. Having booked Hollywood stars Lorne Greene and Dan Blocker (Ben and Hoss Cartwright from the Bonanza television series) for a three-day gig, the fair’s management knew ticket sales depended upon good weather, something the fair didn’t always get. Berry placed his smoking contraption next to the Swine Building and a week later received a $500 check for successfully preventing rain (a process he kept close to the vest).

As for Berry’s guarantee of a White Christmas, he came close. The weather service in Little Rock officially recorded a 1.5-inch snowfall on December 24, but most of the flakes had melted by Christmas morning.

Berry made an appearance in 1962 on the popular television show To Tell the Truth, and found himself in the news again in 1966 following an outburst of UFO sightings around Fort Smith. According to the major, he’d inadvertently caused public hysteria when chemicals he’d discharged into the atmosphere collected in basketball-sized objects that emitted strange lights. He even got a prominent mention (and two photographs) in an April 1972, article (“We’re Doing Something About the Weather!”) in National Geographic.

Berry’s methodology produced mixed results. In one month alone, he received more than $5,000 from six Arkansas towns for delivering rain. But he also regularly failed to generate the specified precipitation for other clients. When the self-proclaimed Arkansas rainmaker announced plans to expand operations into the Lone Star State, the Texas State Water Development Board warned Berry he could be jailed for attempting to modify weather without a permit.

Late in the summer of 1974, Homer Berry hung up his rain suit and retired from the weather alteration business, citing eye problems from years of chemical exposure. He moved to Arizona where he lived for about a year before dying at the age of 69.