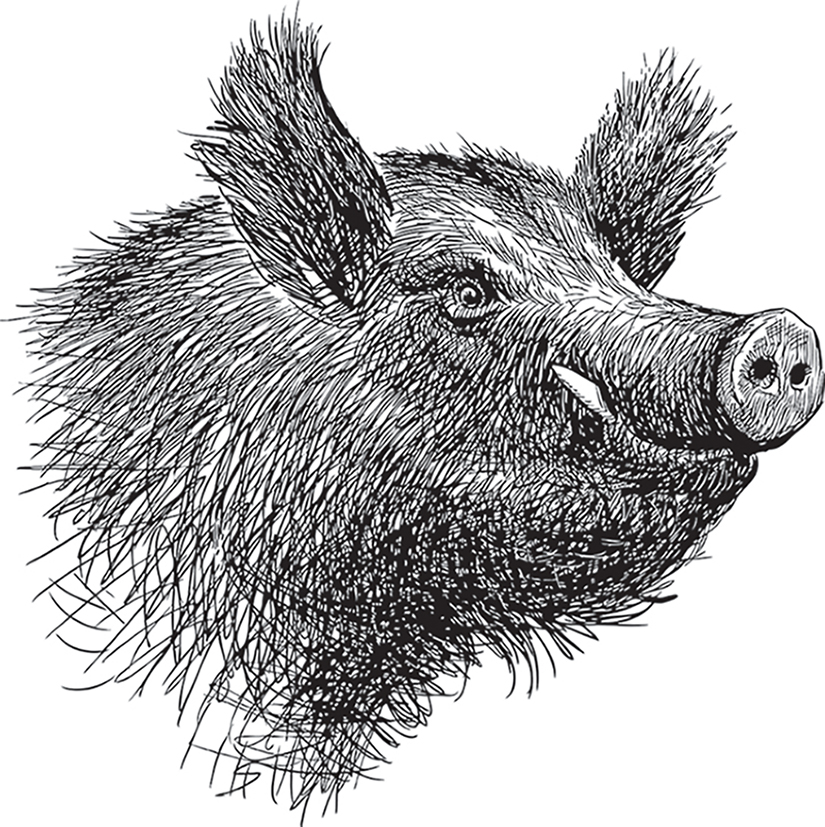 By Joe David Rice
No way could I write this book without a mention of razorbacks. First, the fiercely beloved wild hog is the mascot of my alma mater, the University of Arkansas. But more importantly, the background story on this unique symbol presents a fascinating tale.
Following its establishment in 1871, the University of Arkansas soon fielded a football team known as the Cardinals. John C. Futrall, the first coach, won five games and only lost two during his brief tenure — not bad for a guy initially hired to be a Latin and Greek professor. Futrall went on to serve as President of the University of Arkansas from 1913 through 1939 and, among other matters, successfully fought a proposal to move the institution from its Northwest Arkansas site in Fayetteville to centrally located Little Rock.
After Futrall’s departure, Arkansas’ teams saw six coaches come and go during the 1897-1907 span, producing a combined tally of 32 wins, 32 losses and 6 ties. In 1908, Hugo Bezdek was hired as head coach, leaving the University of Oregon where he had compiled an attention-getting 5-0-1 record in one season with the Webfoots (now the Oregon Ducks).
The 24-year-old Bezdek brought invaluable experience and insights to the Arkansas athletic program. An All-American fullback at the University of Chicago, he had played under legendary coach Amos Alonzo Stagg. In those days, the University of Chicago was a powerhouse on the gridiron, no doubt partly due to Coach Stagg’s imaginative innovations such as the lateral pass, man in motion, the reverse and – believe it or not – the huddle. Stagg’s also the man who came up with the ideas of tackling dummies, numbered uniforms and varsity letters.
Bezdek’s second Arkansas team, the 1909 Cardinals, won all 7 of its games, including a 15-0 victory over the formidable Louisiana State University Tigers. When the team returned by train to Fayetteville, a throng of enthusiastic students awaited at the station to greet their heroes. Coach Bezdek addressed the crowd, praising his players, and said they fought “like a wild band of Razorback hogs.” After that momentous pronouncement, the Cardinals nickname never stood a chance. It’s been Razorbacks ever since, often shortened to simply “the Hogs.”
RELATED: Get to Know Joe David Rice
Although there’s no evidence Bezdek uttered other memorable similes, he went on to have a wide-ranging career in athletics. He led the Razorbacks a few more years before the folks at Oregon lured him back where he coached from 1912 through 1916. He later served as head football coach at both Penn State University and Delaware Valley College. The versatile Bezdek also managed a Major League Baseball team (the Pittsburgh Pirates) before taking over the head coaching slot for the National Football League’s Cleveland Rams (now the Los Angeles Rams).
The University of Arkansas Razorbacks have played nearly 1,100 football games since Hugo Bezdek inadvertently bestowed a new name on the school’s team back in 1909. With generation after generation proudly calling the Hogs over the years, the Razorbacks have won almost 60 percent of those contests. If you’ve not experienced hog-calling, attend a Razorback game in Fayetteville and listen to the distinctive “WOOOOO . . . PIG … SOOIE!” of 75,000 frenzied fans.
But some may ask, what exactly is a razorback of the non-mascot variety? It’s a good question.
The wild boars of Europe and Asia had no counterparts in the Western Hemisphere. North America remained pig-free until about half a millennium ago. Historians generally agree that Columbus brought over some porcine stock when he arrived on this side of the Atlantic, but they give Hernando de Soto credit for introducing domestic swine to the continent when he and his entourage landed on Florida’s west coast in 1539. A few of the more curious and elusive among his herd of hogs managed to escape — and thus was born the legendary razorback.
Today, feral hogs can be found in all 75 Arkansas counties — and that’s not a good thing. These wild pigs destroy native habitat, wreak havoc on indigenous wildlife and carry dozens of diseases, several of which pose serious health threats — such as brucellosis — to humans. Compounding an already bad situation, feral hogs are extremely prolific. Sows, which can bear two litters (six piglets per litter, usually) a year, are capable of reproducing when they reach six months. To make matters even worse, unscrupulous individuals have illegally released wild hogs on the state’s public lands for “sport hunting.” With thousands of feral hogs annually inflicting millions of dollars of damage across the state, the Arkansas Game and Fish Commission is searching for solutions.
________________________________________________________________________
Joe David Rice, former tourism director of Arkansas Parks and Tourism, has written Arkansas Backstories, a delightful book of short stories from A through Z that introduces readers to the state’s lesser-known aspects. Rice’s goal is to help readers acknowledge that Arkansas is a unique and fascinating combination of land and people – one to be proud of and one certainly worth sharing.
Each month, AY will share one of the 165 distinctive essays. We hope these stories will give you a new appreciation for this geographically compact but delightfully complex place we call home. These Arkansas Backstories columns appear courtesy of the Butler Center for Arkansas Studies at the Central Arkansas Library System. The columns will be collected and published in book form in late 2018 by Butler Center Books.