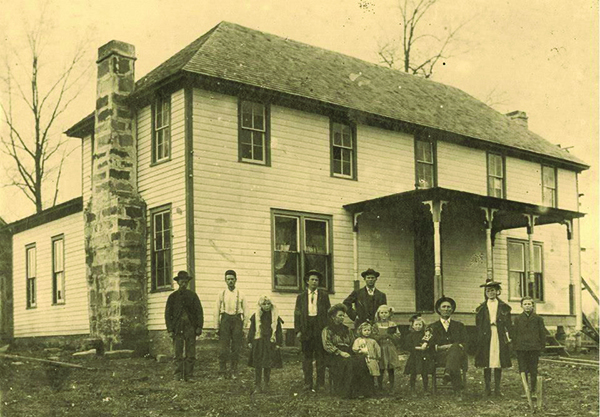 America has slightly more than 25,000 cities, towns and villages scattered across its 3.8 million square miles. Only two in this vast array of human settlements are called Snowball. One’s in central Minnesota, about equidistant between Minneapolis and the Canadian border. The other can be found some 875 miles almost due south in the Ozarks of north-central Arkansas. The northern locale receives about 55 inches of snow annually, or approximately 10 times that of its southern cousin. While Snowball would seem appropriate for a small Minnesota town, it doesn’t strike one as a good fit for an Arkansas hamlet.

As it turns out, Snowball is the unintended name of the quiet little burg in Searcy County. Settlers arriving in the Calf Creek valley in the 1830s eventually constructed a grist mill and even a cotton gin. In 1885, they built a two-story stone Masonic lodge, also using it for school and church functions. The Masons named this new structure Snow Hall to recognize Benjamin Franklin Snow, the Searcy County sheriff at the time. When residents petitioned the federal government for a post office a few years later, a careless bureaucrat — or maybe a prankster — in the postal system apparently converted the application for a Snow Hall Post Office into a formally approved Snowball Post Office. And the community’s been known as Snowball ever since. 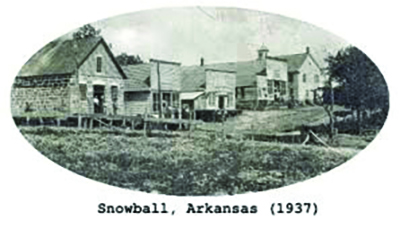 The current version of Snowball is a far cry from its look of a century earlier. A general store and hotel appeared shortly after the post office opened and a stave mill (which produced narrow strips of oak for wooden barrels) went into operation in 1912. But the stave mill moved to Marshall, and a fire in the fall of 1945 claimed most of the small business district. The population — which at one time reached 500 or so — dwindled as the younger set sought futures elsewhere and old-timers gradually passed on. The post office closed its doors in 1966.

Snowball enjoyed a temporary reprieve in the 1970s when a number of back-to-the-landers settled in the area. But the subsistence lifestyle of the movement proved more difficult than anticipated,  and over the years, many of these new residents opted out and left for more appealing alternatives.

Should you want to check out what’s left of Snowball, turn west onto Arkansas Highway 74 from U.S. 65 a short distance above Marshall. After driving seven miles through pretty countryside, you’ll come to what was supposed to have been Snow Hall. You’ll find a few homes, the entrance to the former Snowball High School (since converted into a pavilion) and the boarded-up post office.

As for the original Masonic Hall, it’s gone — but another two-story stone structure honoring B.F. Snow stands proudly in its place.