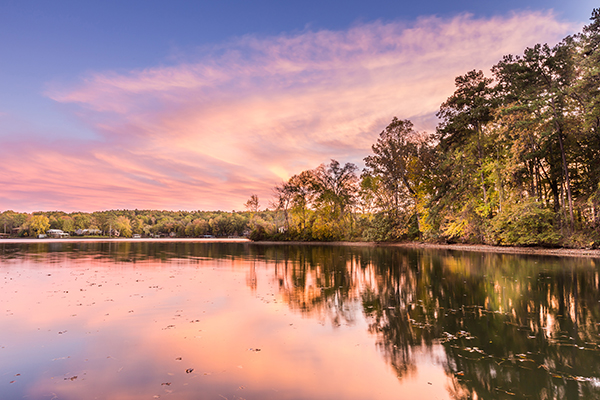 I can think of few better ways to spend a hot summer afternoon than splashing around in one of the state’s many swimming holes — especially if a rope swing’s available. Soaring out over the water and then plunging into the clear, cool depths is a memory that’ll last forever. It’s even better if you’re with a bunch of good friends, and there’s an iced-down watermelon waiting on shore.

Some of my acquaintances have yet to enjoy the experience of swimming in a real, live creek and several have voiced their objections, citing fear of fish, turtles or snakes. While it’s true I’ve spotted a wary snake or two and have had perch nibble at moles on my skin, I’ve never had any trouble with the native critters when I’ve temporarily invaded their domain. And I don’t emerge from the water smelling like I’ve just been dipped in a vat of chlorine!

My favorite swimming holes are in the creeks and rivers of the Ozarks and Ouachitas, although most of the big lakes have nice swimming areas, too. But the swimming holes along streams just seem more intimate, more natural and more traditional. Plus, they’re usually less crowded.

In the Ouachita Mountains, some of the more memorable spots include Knoppers Ford, Jack Creek, Little Missouri Falls, several holes along the Caddo River and the Brushy Creek area on the Cossatot River. For lake fans, try out Shady Lake, Lake Sylvia, or any of the large reservoirs such as Lake Ouachita, Lake Greeson and DeGray Lake and their dozens of swimming areas.

In the Ozarks, the Buffalo River could be described as a series of swimming holes connected by riffles and rapids. A time-honored swimming hole is at the low-water bridge near Ponca. Several miles downstream is a great hole at Jim Bluff. There are fine swimming spots at the Highway 7 bridge, immediately downstream from the US 65 bridge, at Shine-Eye, and at the Buffalo Point campground.

Other good swimming holes in the Ozarks are at Long Pool on Big Piney Creek, Bayou Bluff on Illinois Bayou, Haw Creek Falls near Fort Douglas, Richland Creek and Bluff Hole Park on the Mulberry River. Also, Bull Shoals, Norfork, Greers Ferry and Beaver Lakes each have an assortment of nice swimming areas.

Although it’s illegal to get naked outdoors in the Natural State (go figure!), skinny-dipping has been known to occur in many locations across Arkansas. Should you have such a hankering to flout the law and enjoy the pleasure of water and air against your bare skin, please be discreet. Quiet coves, especially on summer weekdays, of the larger lakes have been known to attract those wishing to swim sans suits.

Authorities might tell you otherwise, but skinny-dipping has many devotees. Thomas Hart Benton, the noted artist and frequent Buffalo River visitor, regularly included skinny-dipping among his favorite Arkansas activities.

Joe David Rice, former tourism director of Arkansas Parks and Tourism, has written Arkansas Backstories, a delightful book of short stories from A through Z that introduces readers to the state’s lesser-known aspects. Rice’s goal is to help readers acknowledge that Arkansas is a unique and fascinating combination of land and people – one to be proud of and one certainly worth sharing. Each month, AY will share one of the 165 distinctive essays. We hope these stories will give you a new appreciation for this geographically compact but delightfully complex place we call home. These Arkansas Backstories columns appear courtesy of the Butler Center for Arkansas Studies at the Central Arkansas Library System. The essays have been collected and published by Butler Center Books in a two-volume set, both of which are now available to purchase at Amazon and the University of Arkansas Press.