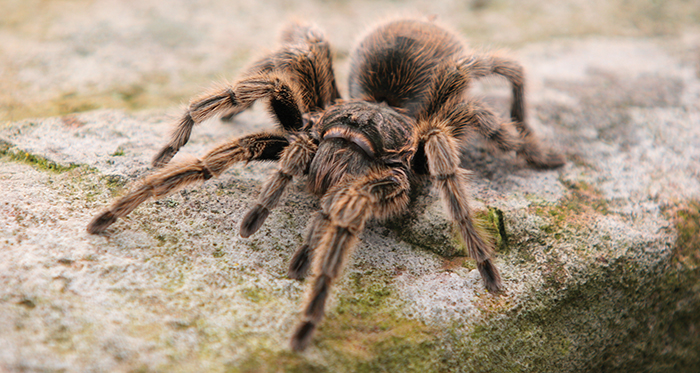 If you assume tarantulas, the largest spiders in the United States, can only be found in the desert landscapes of Texas, Arizona and New Mexico, you are mistaken. Although these palm-sized spiders are relative newcomers to Arkansas — they got established here about 8,000 years ago, a very short time in biological terms — they reside in two-thirds of our counties. This part of the world had a drier and warmer climate back then, much like that of today’s Southwest.

Tarantulas, despite their startling appearance, are no threat to you, your children, or your pets. These hairy beasts seldom bite humans and the rare wound approximates a bee sting.

Interestingly, Dr. William J. Baerg, a University of Arkansas entomology professor, performed much of the early scientific work on these intimidating spiders beginning in the 1920s. A Kansas native with a PhD from Cornell, Baerg authored The Effect of the Poison of Tarantulas in a 1921 issue of The Journal of Parasitology. Using a large female tarantula he’d captured on a rocky hillside near the Fayetteville campus, Baerg conducted a series of experiments to determine the potency of the venom.

In the first of three trials, the spider was forced to bite the shaved inside rear leg of a guinea pig. The little pig squealed when struck by the tarantula’s fangs, but all other observations — temperature, respiration, movement — indicated no adverse effects.

A young albino rat was the subject of the second experiment. The rat screeched and struggled when bit and went through a four-hour period of partial paralysis, spastic motions and restlessness before fully recovering.

Baerg found a human volunteer — himself — for the third phase. On the morning after his tests with the guinea pig and the rat, he returned to the lab and had the same tarantula twice strike the little finger of his left hand. The experience felt like “the stab of a pin” with discomfort disappearing within 45 minutes. No swelling or stiffness occurred. The next day Baerg repeated the experiment: same spider, same human finger, same results.*

In the wild, tarantulas use their fangs to deliver venom which immobilizes crickets, grasshoppers, beetles, cicadas and similar prey. Rather than constructing webs, they patiently wait near the opening of their burrows — which can extend two feet underground — and then strike when an unsuspecting victim wanders by. Females seldom venture more than a couple of feet from their burrows, but males will travel up to a mile or more in search of a mate during the autumn months.

Tarantulas live longer than you might expect. The spiders don’t reach sexual maturity until they’re 8 to 10 years old. Males typically die after breeding, but females can live for 20 to 25 years.

Regarding habitat, tarantulas prefer dry sites — usually facing south or east — such as rocky hillsides or upland glades. When the Arkansas Natural Heritage Commission conducted a statewide tarantula survey in 2004, reports indicated these massive spiders were all but absent in eastern Arkansas except along Crowley’s Ridge. Most observations occurred north and west of US Highway 67, which bisects Arkansas from southwest to northeast.

I’ve seen many of these unusual creatures over the years, almost always in the fall tiptoeing across highways of the Ozarks or Ouachitas. I now know these were male tarantulas engaged in the eons-old quest to continue their species.

As for Professor Baerg, he enjoyed a distinguished career — to include international research as both a Fulbright Scholar and Guggenheim Fellow. He accumulated an extensive list of publications, among them a definitive 1958 book on tarantulas — which has since been reprinted. And he lived to the ripe old age of 95.

*Baerg later had a far different reaction when he induced a black widow spider to bite the middle finger of his left hand. He experienced swelling and “excruciatingly severe” pain, had trouble breathing and speaking, and spent 66 hours in the hospital.