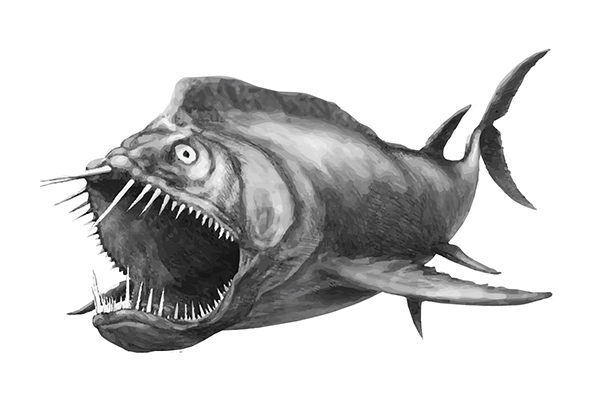 By Joe David Rice
About 250 miles northeast of the stomping grounds of the Fouke Monster lies another favorite haunt of cryptozoologists. It’s a stretch of the White River near Newport – and the quarry is an elusive beast aptly named the White River Monster.
Although Native American lore is said to have passed down tales of a legendary phenomenon and other sightings that date from 1915, things didn’t get really interesting until the summer of 1937. That’s when Dee and Sylvia Wyatt, a sharecropper couple living on the river, spotted what appeared to be a drowning horse thrashing in the middle of the stream. They kept quiet about it at first, fearing ridicule from friends and family. But when the same commotion continued for several days, they finally contacted Bramblett Bateman, their landlord and the scion of a prominent family. After Bateman observed the strange creature churning the water, he hurried into Newport, reporting he’d seen a beast in the White River “as big as a boxcar and slick as a slimy elephant without any legs.” A dozen or so other witnesses, including a Jackson County deputy sheriff, stepped up to corroborate the perplexing accounts.
Although the location of the alleged sightings was about six miles south of Newport via an unpaved and overgrown road, hundreds of townsfolk swarmed the riverbank in the days to follow. Many left convinced they’d spotted the aquatic invader. Newspaper articles from across the country included detailed descriptions of the monster, but press photographers never captured it on film. Time magazine, noting that “1937 has been a dull year for monsters,” got in the act, running a 500-word piece on the peculiar happenings in Newport.
Armed citizens, one toting a Thompson submachine gun, patrolled the shoreline 24 hours a day for a week before the Newport Chamber of Commerce partnered with Bateman and began charging spectators 25 cents a head. They then hired Charles Brown, a professional diver from Memphis, to probe the river’s depths. Carrying a razor-sharp eight-foot harpoon, Brown slipped beneath the surface three times over a two-day period in search of the behemoth. Meanwhile, local entrepreneurs built a dance floor next to the river, brought in musicians and sold barbequed goat sandwiches, fresh fruit and cold drinks to the festive throng. The daring could even hire a pilot for a bird’s-eye view of the spectacle. After Brown found no evidence of anything unusual, not surprising given the murky water’s three-inch visibility, the carnival-like atmosphere soon dissipated.
RELATED: Arkansas Backstories: Mosquitos
One expert estimated Newport had received $9 million worth of free publicity – in 1937 dollars – as a result of the hoopla. Strangely enough, the White River Monster story had overshadowed another search going on at the same time – the hunt in the Pacific for lost aviatrix Amelia Earhart.
In the summer of 1971 additional sightings of the White River Monster occurred. One gentleman supposedly got a Polaroid photograph of the beast, but it was too vague to be useful. Curious about these incidents, Ollie Ritcherson and Joey Dupree launched a boat into the river near Newport and headed for Towhead Island, a short distance upstream from the location of the 1937 incidents, where bizarre tracks had been found in the sand. Their watercraft suddenly struck something in the middle of the river – elevating the boat and terrifying the men who were convinced they’d landed on the back of the brute.
The Ritcherson/Dupree duo didn’t see the monster, but other sightings that summer included one that claimed a horn emerged from the creature’s forehead and another that reported, “It looked as if the thing was peeling all over, but it was a smooth type of skin or flesh.” These observations convinced one imaginative biologist that a large male elephant seal – in its annual molting stage – had mistakenly traveled thousands of miles from points unknown, across the Gulf of Mexico, into the Mississippi River and up the White River to the Newport area.
Fortunately, the Arkansas Senate found time to debate the matter. Recognizing it was “in the best interest of the State of Arkansas to protect the welfare of the now internationally famous White River Monster from harm or extinction because of the great tourist attraction,” this august body passed a resolution in 1973 establishing a 48-mile riparian reserve to be known as the “White River Monster Sanctuary and Refuge.” Referring to periodic sightings by reputable persons, this non-binding resolution, sponsored by Senator Robert Harvey of nearby Swifton, made “it unlawful to molest, kill, trample or harm the White River Monster while in its native retreat.” No violations have yet been reported.
RELATED: Arkansas Backstories: Razorbacks
________________________________________
Joe David Rice, former tourism director of Arkansas Parks and Tourism, has written Arkansas Backstories, a delightful book of short stories from A through Z that introduces readers to the state’s lesser-known aspects. Rice’s goal is to help readers acknowledge that Arkansas is a unique and fascinating combination of land and people – one to be proud of and one certainly worth sharing.
Each month, AY will share one of the 165 distinctive essays. We hope these stories will give you a new appreciation for this geographically compact but delightfully complex place we call home. These Arkansas Backstories columns appear courtesy of the Butler Center for Arkansas Studies at the Central Arkansas Library System. The essays will be collected and published by Butler Center Books in a two-volume set, the first of which will be available this month.
________________________________________