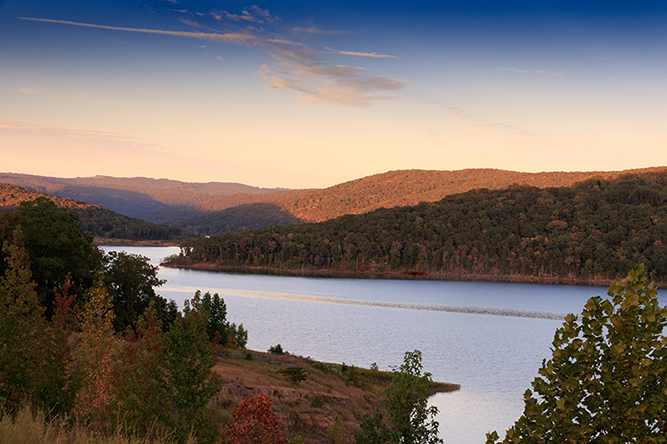 Driving from Fayetteville to Fort Smith requires about an hour these days, much of it through the heart of the Boston Mountains. A little over a century and a half ago, this trip — using the mule- and horse-drawn stages of the Butterfield Overland Mail Company — took over 14 hours. Waterman L. Ormsby, an adventuresome reporter for the New York Herald, made the journey in 1858 and forwarded this account to his editors:

Within his fascinating narrative, Ormsby provided one explanation for the name Boston Mountains (which were known as the Black Mountains and even the Pawnee Mountains in the early 1800s). No less an authority than the Boston Globe supports this interpretation, stating in a 2014 article that, “Frontier settlers named these the Boston Mountains — not because of any connection with Massachusetts but because of the area’s challenging terrain.” An alternative theory holds that the origin of the name can be traced to the French word “bosse,” loosely translated as bump, hump, lump or knob — any of which might have been used to describe that elevated countryside in Northwest Arkansas. A third possibility is that the term is the regional mangling of a French phrase for “rough road.” Ozark scholar Milton Rafferty suggested yet another option: That the name might be tied to the tiny community of Boston in the southeastern corner of Madison County, but Arkansas historian/journalist Ernie Deane noted it’s more likely the village was named for the surrounding mountains rather than vice versa.

Arkansas’ portion of the Ozarks includes three distinct divisions. The highest and most rugged is the Boston Mountain region, a relatively narrow east-west belt extending from southwestern Independence County to the Oklahoma state line, to the north of and more or less paralleling Interstate 40 and US Highway 64. The challenging landscape discouraged pioneer settlement, and even today towns are small and relatively scarce — places such as Mountainburg, Ozone, Ponca and Clinton. Much of the land was never removed from the public domain and became the Ozark National Forest, courtesy of President Teddy Roosevelt in 1908. 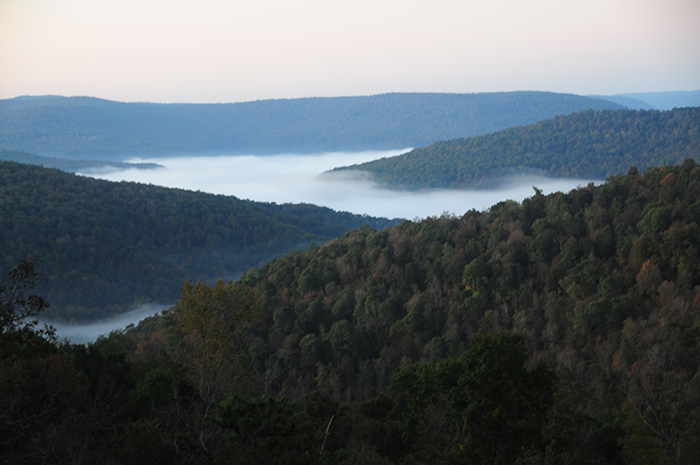 Immediately to the north of the Boston Mountains is the Springfield Plateau, considerably lower for the most part than the lands to the south. With its less demanding countryside, this region of the Ozarks has sprouted cities such as Fayetteville, Springdale, Rogers, Bentonville and Harrison.

To the north and east of the Springfield Plateau is the third of our Ozark divisions, the Salem Plateau. Typically lowest in elevation of the three, its gently rolling terrain includes the communities of Mountain Home, Evening Shade, Hardy, Calico Rock and Pocahontas.

Although making up only about 8 percent of the state’s land area, the Boston Mountains include a disproportionate share of Arkansas’ most prominent geological features, to include such points of interest as Big Bluff, Lost Valley, White Rock, Sam’s Throne, Whitaker Point, Hemmed-In Hollow Falls, Richland Falls and the Glory Hole. The Buffalo National River heads up in the region, as do many other major streams: The White, Little Red, Kings and Mulberry rivers along with Big Piney, Crooked and War Eagle creeks and the Illinois Bayou. Two state parks — Devil’s Den and Lake Fort Smith — are found in the Boston Mountains, as are many of Arkansas’ best hiking and mountain biking trails. As you might expect, the region harbors a great variety of wildlife. Black bears, elk, bald eagles and even the elusive mountain lion have been sighted in the area. 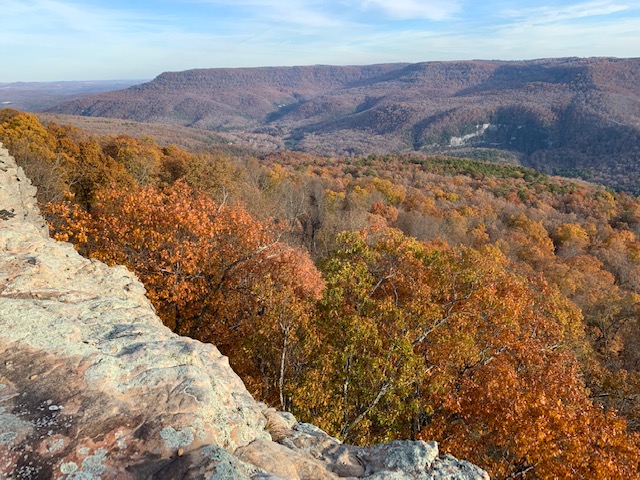 One question that immediately comes to mind is this: Are the Boston Mountains really and truly mountains? Noted Ozark historian Brooks Blevins offers his opinion. “In spite of the favorable appellation and impressive vistas, the Boston Mountains are not mountains in a geologic sense but an uplift dissected by severe erosion,” Blevins says.

But I lean toward this conclusion from a 1936 report by the Arkansas State Planning Board: “Gorges 500 to 1,400 feet deep, which lie between steep ridges and jagged spurs, are common enough to warrant the application of the term ‘mountainous’ to this highland region.” 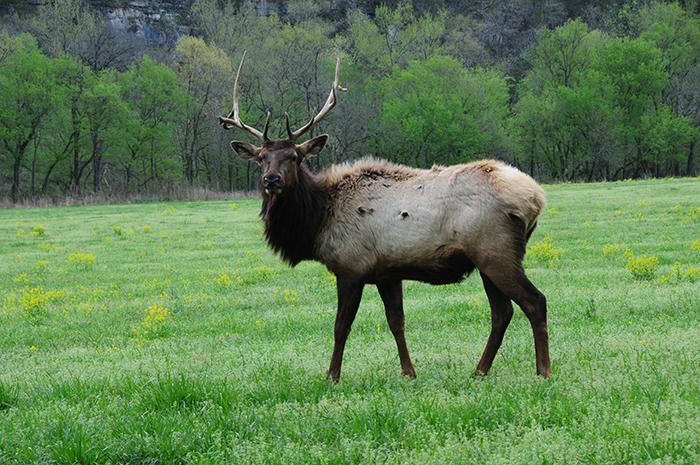 Most mountain ranges are formed when the earth’s tectonic plates push against one another, causing the land to bend and fold and shift. The Ouachita Mountains of southwest Arkansas provide a good example. But the Ozarks have a vastly different origin. The layers of rock that formed the Ozarks can be traced back to a shallow sea hundreds of millions of years ago. Sand, silt and the remains of marine life piled up over the eons. At some point, the sea bed underwent a geologic uplift, creating large dome-shaped plateau. The waterways began gradually eroding the uplift, giving us the characteristic flat-topped mountains and deep, narrow valleys of the Ozarks.

A great time to truly appreciate the majesty of the Boston Mountains is right now — in the dead of winter. The leaves are off the trees and it’s much easier to see and enjoy the lay of the land. Here are my 10 recommended journeys by car, shortest to longest, to capture this sense of this unique region: 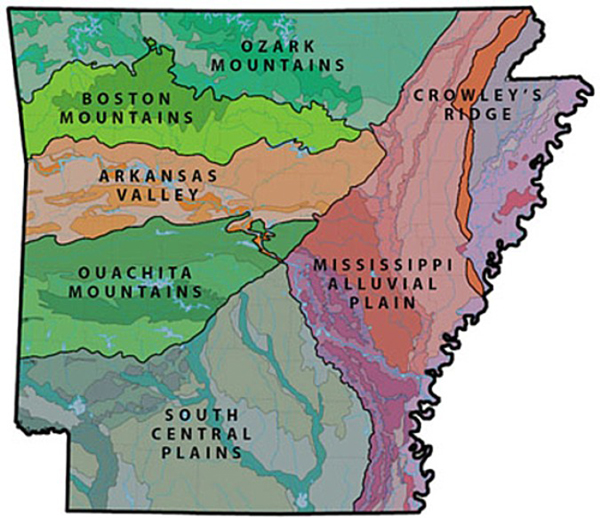 1) Just north of Cass on Arkansas 23, take Arkansas 215, heading east. You’ll follow the Mulberry River for about a dozen twisting miles before arriving at Oark and its historic general store (said to be the state’s oldest continuously operated retail establishment, dating from 1890).

2) From Jasper, take Arkansas 74 west to Ponca. This 14-mile trip climbs up to Mount Sherman, passes through Low Gap (the local café is worth a visit), and then descends into the Buffalo River valley.

3) From Harrison, take Arkansas 43 south for 26 miles to Ponca. As you ascend the Boston Mountains some 7 miles into your drive, the view to the east is spectacular. “Steep Grade” warnings are common as the road drops down into Ponca. 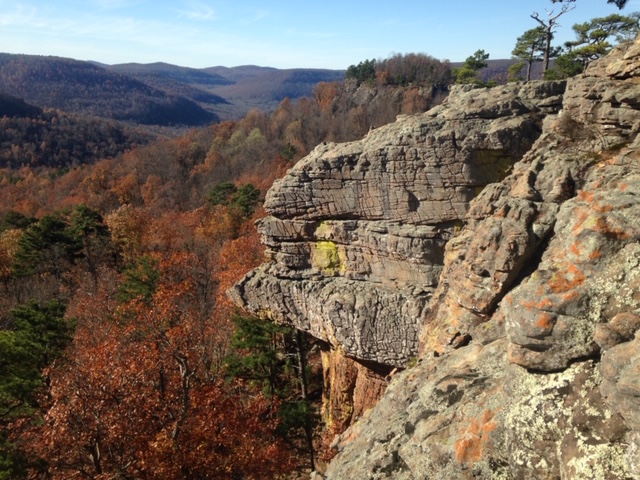 4) Beginning in Hagarville (Johnson County), take Arkansas 123 north for 47 miles to Mount Judea, passing by Sam’s Throne along the way. Arkansas 374 from Mount Judea to Arkansas 7 is a fine 10-mile extension of this route.

5) From Ozark, take the Pig Trail Scenic Byway (Arkansas 23) 48 miles north to Huntsville. Long popular as one of the state’s most scenic drives, this road ultimately leads to Eureka Springs.

6) In Marshall, take Arkansas 27 to the southwest for 56 miles to Hector. There’s a fine picnic spot at Bayou Bluff, but don’t expect many gas stations along this curvy route.

7) On the eastern edge of Clarksville, follow Arkansas 21 north for 58 miles to Kingston, passing through Ozone and historic Boxley Valley as you drive. Consider a visit to the picturesque Glory Hole 5.7 miles north of Fallsville (park on the right side of the highway; trail is about 2 miles round-trip) or a hike down into Smith Creek, one of the Arkansas Nature Conservancy’s hidden gems, between Mossville and Boxley.

8) The Boston Mountain Scenic Loop (80 miles) is a combination of U.S. 71 and Interstate 49. Begin at Alma and head north on Highway 71 to Fayetteville and return on the interstate (or vice versa). Lake Fort Smith and Devil’s Den state parks are on the way. 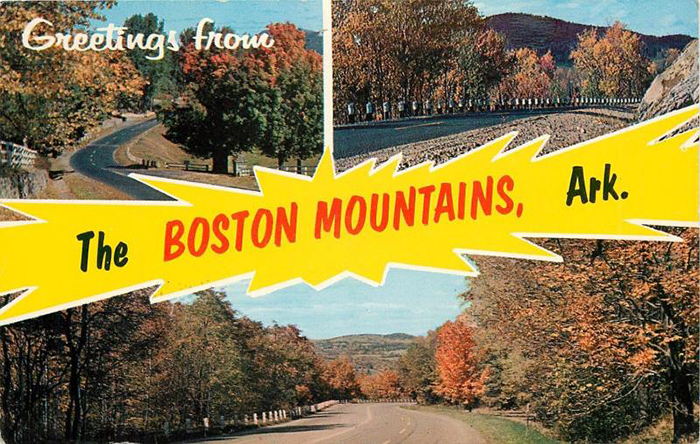 9) From Conway, drive north on US 65 for 109 miles to Harrison. You’ll enter the Boston Mountains just north of Bee Branch and exit them as you descend into Marshall.

10) The straight-line distance from Fayetteville to Clinton is 101 miles. But for an exhaustive Boston Mountain experience, drive the 163 miles between these two cities on Arkansas Highway 16. You’ll pass through over 20 quaint Arkansas communities with names such as Rupert, Alread, Tilly, Ben Hur, St. Paul and, appropriately, Boston. The Ozark National Forest has a fascinating day-use area (Alum Cove Natural Bridge) about half-way into the route. You won’t make time, but you can make some memories.

Spend some time in Arkansas’ Boston Mountains and refresh your soul!