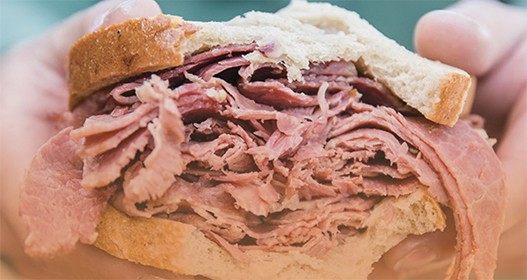 When you think of iconic Arkansas foods, it might be easy to overlook one of the most famous delicacies the Natural State has to offer.
Sure, the obvious picks are fried catfish, thick barbecue sandwiches (of course, the type of rub and sauce is always up for debate) and Delta tamales. But you’d be leaving one out: the humble corned beef sandwich.
Oaklawn Racing & Gaming is doing its part to deliver corned beef to the Arkansas masses and its other visitors. Every year, Oaklawn hosts Corned Beef Day, when each sandwich is only 50 cents and they are served with soft drinks for 10 cents.
The corned beef sandwich tradition dates back to the founding of Oaklawn in 1904 when Charles Dugan, Dan Stuart and John Condon formed the Oaklawn Jockey Club and began construction of the park in Hot Springs, according to the Encyclopedia of Arkansas. Corned beef has been a staple at the track since its early days, and in 2004, Oaklawn began offering retro prices for the sandwiches during the opening weekend of racing season, according to Jennifer Hoyt, Oaklawn’s Media Relations Manager.
“Since 2004, which is the year when we celebrated our 100thanniversary, we have had 50-cent Corned Beef Day. It’s always the opening Saturday,” she says.
To celebrate the centennial, Oaklawn wanted to give visitors a taste of what coming to the park would be like in 1904. “We thought, ‘When people came here in 1904, what would the prices have been?’ We just kind of guessed that corned beef sandwiches were 50 cents and drinks were 10 cents. And that’s how that tradition was started,” Hoyt says.
While other foods were priced at low prices, it was the corned beef sandwiches that became the star. Since its 2004 debut, the 50-cent sandwiches on opening weekend have become an institution.
“It’s one of our biggest promotions throughout the year. People will line up; our doors open at 11 a.m., and people will be line starting around 9…just to get in line for a sandwich,” Hoyt says.
Around Oaklawn Park, the corned beef serves as a signal that opening weekend is approaching. When the corned beef starts to arrive, everyone takes notice! “You know it’s opening week when you start smelling the corned beef, usually on Monday,” Hoyt says.
Hoyt says it’s a great smell if you love corned beef, which clearly, many Arkansans do.
Make sure to head to Hot Springs for Oaklawn’s opening weekend and Corned Beef Day on Saturday. The gates open at 11 a.m., and the first race is at 1 p.m.
READ MORE: The Hot Springs Revival
Image courtesy of Oaklawn Racing & Gaming