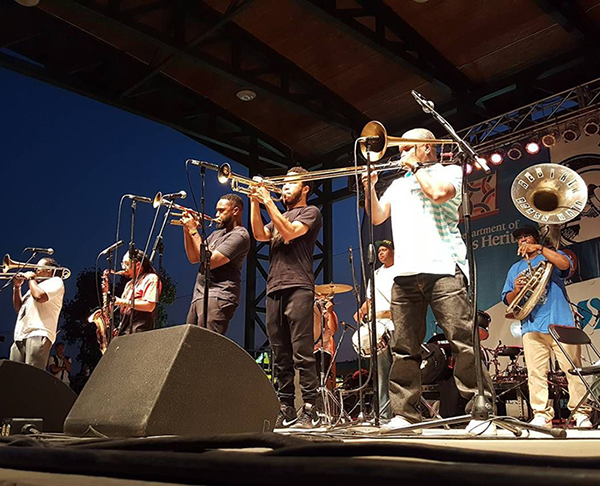 By Caleb Talley
Along with its cooler clime and fiery foliage, fall is known to usher in a bountiful harvest of exciting perennial events. Fairs, festivals and harvest celebrations headline the season, and there’s no better place to enjoy such an event this October than in Arkansas. With our beautiful landscapes, rich heritage and congenial communities, a fall festival in The Natural State might even make you glad that summer is in the rearview mirror.
Here are just a few of Arkansas’ best fall festivals to add to your October calendar.
King Biscuit Blues Festival
Helena – Oct. 3-6
One of the best iconic seasonal music events in Arkansas, the King Biscuit Blues Festival con-tinues to draw massive crowds of blues enthusiasts from around the country and even the globe.
The festival was founded in 1986, when musicians would perform on the backs of flatbed trucks in front of an old Cherry Street train depot, which is now the home of the Delta Cultural Center. It began as a humble, single day event with a crowd no larger than 500. Today, the three-day musical event is the nation’s foremost showcase of classic Delta blues, boasting crowds of over 100,000.
The festival took its name from the legendary King Biscuit Time radio program, one of the longest-running radio programs in the country. King Biscuit Time launched in November of 1941, and featured renowned blues musicians Robert Lockwood Jr. and Sonny Boy Williamson. The program, which is still broadcast from the Delta Cultural Center, won a Peabody Award in 1992 for its contributions to American radio.
RELATED: A Musical Road Trip to the Arkansas Delta
But over the years since the launch of King Biscuit Time, the city of Helena went from a thriving blues town to a community on the verge of dying. City leaders and Main Street directors recommended a music festival to honor Helena’s rich musical heritage and to bring people back to the community. The Sonny Boy Blues Society did just that, banding together to create the King Biscuit Blues Festival and put Helena in its rightful place in musical history.
The festival, held every October, has been a launching pad for many young blues musicians and a rite of passage for the legends. It features great Delta food, blues symposiums, barbecue cook-offs, bike rides and the most good music found in any one place. In addition to a number of jam sessions, the festival features nearly 80 scheduled performances on six different stages. Some of this year’s headliners include Bobby Rush, Willie Cobb, Blackberry Smoke and Blind Mississippi Morris.
A three-day pass to the King Biscuit Blues Festival costs $95. Single-day tickets cost $55. To purchase tickets or for more information, visit kingbiscuitfestival.com. Mississippi River cruises on the Island Queen are also available throughout the festivities. 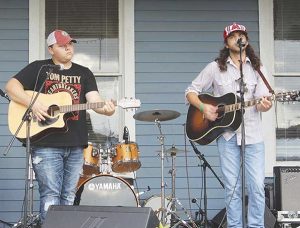 Downtown Music and Arts Festival
Forrest City – Oct. 5-6
Forrest City’s Downtown Music and Arts Festival is one of the state’s youngest recurring fall festivals. But you wouldn’t know it from the level of expertise applied to making each year a memorable event.
The idea for the festival was born out of a desire to highlight some of the region’s rich cultural heritage in the heart of a city often overlooked when it comes to arts and music. The event, which began in 2012, was the brainchild of the St. Francis County Museum and the Forrest City Downtown Revitalization Project, with help from East Arkansas Community College and the Forrest City Chamber of Commerce.
“The historical society wanted to highlight how the Delta’s landscape and history helped create the unique musical tradition of the Mississippi blues by developing a Blues Music Heritage Event,” says Jenny Vandiver, of the Forrest City Downtown Revitalization Project. “The blues event was such a success and was immediately incorporated into the Downtown Music and Arts Festival… Because of the importance of the rich and significant blues heritage of Forrest City.”
Forrest City and St. Francis County have contributed greatly to the incredible musical tradition of the Arkansas Delta. Some of the artists it produced helped shape music for a generation; artists like Al Green, Charlie Rich and Forrest City Joe all called the county home.
RELATED: The State of Music
“Music festivals in the Delta are one of the best ways to focus on the unique cultural heritage found in areas along the southern Mississippi Delta region,” says Vandiver. “Some of the greatest blues, rock ‘n’ roll, and country musicians came from the heart of the Mississippi Delta region. Visitors and locals, alike, can enjoy this real, raw and authentic heritage by going to music festivals like our own in the Delta.”
Forrest City’s Downtown Music and Arts Festival doesn’t quite have the name recognition that other marquee fall festivals have garnered over the years. But it remains true to the community that made it possible and continues to deliver a fun and authentic experience.
“The Downtown Festival is unique because it’s not an overly commercialized music event,” says Vandiver. “It stays true to the mission of quality over quantity. We believe that as long as we put careful consideration into all of the details of the event, it will maintain its authenticity. The event includes children’s entertainment, food trucks, local art, museum tours, a beer gar-den featuring Arkansas-made craft beer and, most of all, excellent music performances.”
Past performers include blues legend Willie Cobb, King Biscuit regular Mookie Cartwright, Stax-signed Southern Avenue and Nashville recording artist Patton Hughes. This year, the event will feature Grace Kuch, Charlotte Taylor and Gypsy Rain and more.
The weekend of festivities will be centered around the St. Francis County Museum on the corner of Front and Izard streets.
MusicFest 31
El Dorado – Oct. 18-20
El Dorado’s MusicFest isn’t a new festival. This year marks the event’s 31st anniversary. But it is the second year in which the event will be held in the city’s premier, year-old entertainment complex – Murphy Arts District (MAD).
MusicFest has been a staple of El Dorado for three decades, bringing music and entertainment to audiences of visitors and residents alike. But last year, the event switched into second gear, capitalizing on arts and music to usher in a remarkable revitalization.
Last year’s MusicFest coincided with the debut of the Murphy Arts District in what was an unprecedented display of musical performances that catered to fans of nearly every genre. Last year’s events included performances by Natasha Bedingfield, Train, ZZ Top, Ludacris, Brad Paisley, Migos and Smokey Robinson.

“Even though we’ve only been open for eight months, it is astounding to see the direct and indirect impact [Murphy Arts District] has had on this entire region,” says district president Austin Barrow. “Audiences are responding incredibly well to our diversity of programming.”
Round two promises to be every bit as exciting, with another cross-pollination of high profile musicians in MAD’s intimate, state-of-the-art venues.
This year, visitors and El Dorado residents will have the opportunity to enjoy artists like George Clinton, Sheila E., Sammy Hagar, Bret Michaels, Toby Keith, Justin Moore and Gucci Mane. Hip-hop superstar Cardi B was scheduled to perform during the three-day festival, but canceled all engagements after giving birth to her first child this summer. A replacement has not yet been named, but fans need not worry. Event organizers have proven to be excellent talent recruiters thus far.
Those looking to take in the whole weekend of festivities can purchase a three-day pass, for either the MAD pit ($190) or general admission ($130). The price of both tickets increases by $30 on the day of the show.
For the full lineup of performers and schedule or to purchase tickets, visit MAD’s website at eldomad.com.

Many made their way to Johnny Cash’s boyhood home.
Photo courtesy of Arkansas State University Communications.

Johnny Cash Heritage Festival
Dyess – Oct. 18-20
The Johnny Cash Heritage Festival, formerly the Johnny Cash Music Festival, is one of the state’s latest fall festivals to gain international renown. The festival got its start in 2011 as a music festival held annually on the campus of Arkansas State University in Jonesboro, welcoming legendary country artists such as George Jones, Kris Kristofferson, Reba McEntire and so many more.
In the fall of 2017, the festival switched gears, moving from the college campus to the cotton fields outside of the recently restored Johnny Cash boyhood home in Dyess. The festival evolved from an event focused on just music into one that encompassed everything that contributed to making Johnny Cash the man we know today.
The Johnny Cash Heritage Festival highlights historical elements of the New Deal, the impact that growing up in the Dyess Colony had on a young Johnny Cash and his music, which contributed to the lasting impact he had on American music.
RELATED: Elvis in Marianna
The festival was created as a means of preserving Cash’s legacy in the region. The music festival was launched in 2011 by John Carter Cash and Rosanne Cash in an effort to assist Arkansas State University in acquiring and restoring their father’s boyhood home. Once the home was obtained and restored, thanks in large part to the efforts of Dr. Ruth Hawkins, it was presented to the university during the festivals return in 2017, which took place after a three-year hiatus.
Proceeds from the heritage festival are used to aid ASU in recreating the outbuildings at the Cash farmstead, along with supporting the Johnny Cash Memorial Scholarship Endowment.
The festival returns this fall, Oct. 18-20, to the cotton fields of Dyess. This year’s performers include Jamey Johnson, Alison Krauss, John Carter Cash and Ana Cristina Cash. The festivities will also include symposiums and film screenings, some of which will include Cash biographer John Alexander.
For more information or to purchase tickets, visit johnnycashheritagefestival.com.
RELATED: The Soundtrack of Arkansas