Each January, hundreds turn out to rub elbows, see friends and have a taste of smoked coon at the Gillett Coon Supper.
Though less than 700 people call the Arkansas Delta town of Gillett home, 1,200 tickets are sold each year to a shindig held in the Gillett School Gymnasium the second Saturday in January, where families reconnect, friends chat and politicians glad-hand over a family-style meal of raccoon and all the fixings.
The Farmers and Businessmans’ Group of Gillett has put on the Gillett Coon Supper every year since 1933 (except during World War II). This year marked the 75th anniversary of this singular Arkansas event. The proceeds go to fund scholarships for high school seniors from Gillett.
No commercial raccoon is served. Wild animals are harvested by people in the community who set traps for the furry mammals. Those caught are turned in at a roadside stand for just under two dollars a pound (there’s three to four pounds of meat on the average raccoon). The coon is cleaned, dressed, smoked and served up in aluminum pans. Right before the doors open at 6 p.m., you’ll see a line of men, young and old in white aprons, darting back and forth from a truck into the building with aluminum trays of food. They bring in the smoked raccoon along with baby-back ribs, brisket, rice, sweet potatoes and cake. Every cake is made by a lady from Gillett, and different slices are placed at each setting on the table.
This community event has become a stumping point for generations of politicians from both inside and outside of Arkansas – and it’s not uncommon to run into candidates for political office from any state in the Union or any Arkansas county. The media comes, too, to see who shows up.
A separate shindig happens before the actual Coon Supper. Each year, out on the farm of former U.S. Congressman Marion Berry, a fundraiser for the Marion and Carolyn Berry Scholarship Fund is held, where folks are invited to come out and enjoy duck, ribs and side items before the big event at the town gymnasium. The six-year-old event is considered an hor d’oeuvre to the main event of the Coon Supper. 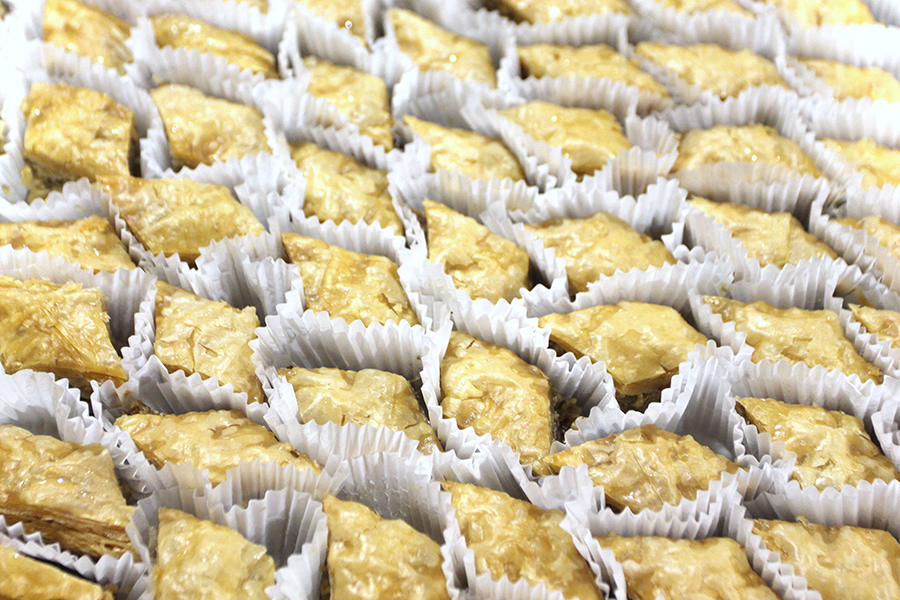 Over the past 33 years, the International Greek Food Festival held in Little Rock has served food, friends and community. The annual event, which is also the largest ethnic festival in Arkansas, has offered visitors a medley of Greek and Mediterranean favorites over the course of three days in May.
Those who attend this rich cultural experience will find baklava, gyros, soutzoukakia, pastitso and so much more. The International Greek Food Festival also features an old-world market, offering up specialty foods like falafel, Greek olive oil and hummus.
Another major feature of this timeless event is its dedication to serving the community through food. To enter the festival, you must bring three canned food items or a $3 donation to charity. Last year, festival organizers collected more than 5,000 pounds of food for the Arkansas Food Bank.
And of course, there’s always live music. Opa! 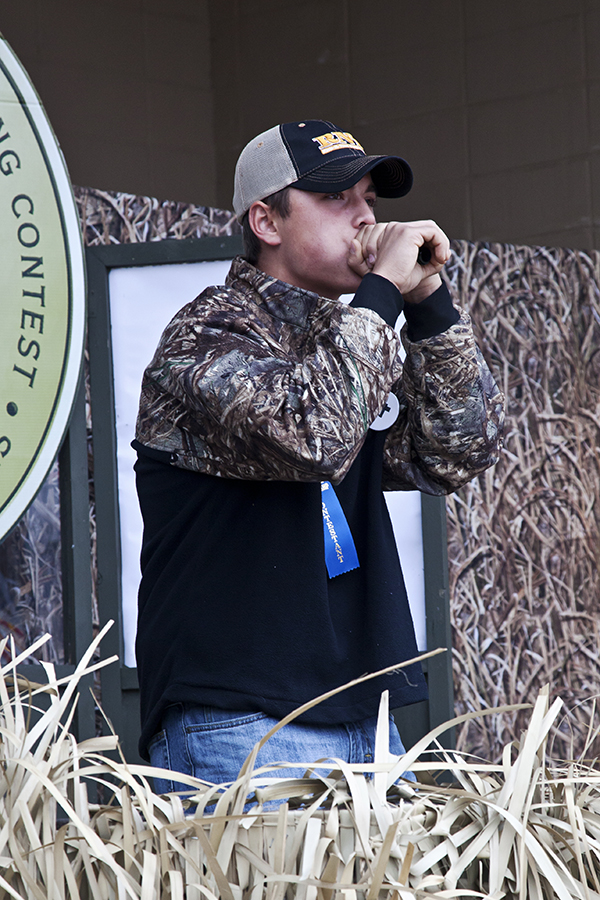 It’s no real surprise that the duck capital of the world (yes, the world) would be home to the best duck gumbo cook-off. But you would be selling the event short if that’s all you came away with.
The World Championship Duck Gumbo Cook Off in Stuttgart is the culmination of a week-long celebration of water fowl in what is known as the Wings Over the Prairie Festival, which also includes trap shooting competitions, youth pageants and a duck calling contest.
But for five hours on the last day of the festival, more than 50 teams whip up at least three quarts of gumbo – half of which is required to be duck – inside elaborate booths that range from tables and a tent to towering duck blinds.
Prizes are awarded to the teams with the best gumbo, and there’s even a category for best booth. The event has become a Thanksgiving-season tradition for the hundreds who attend each year. 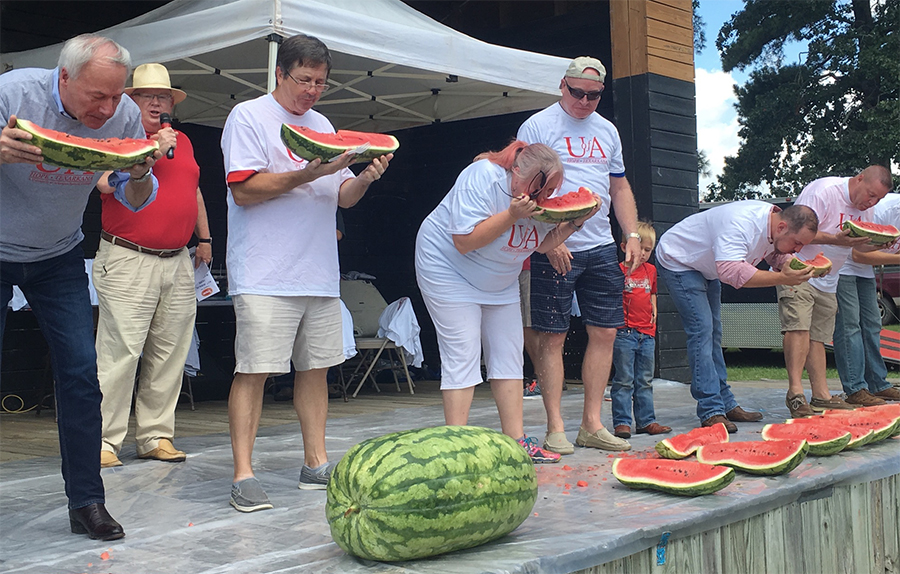 What started as a small, one-day event back in the mid-1920s has since evolved into a grand celebration of the city of Hope’s calling card: the watermelon.
Watermelons run deep in Hope. During the early 20th century, locals would serve train passengers slices of watermelon as they passed through town. Hope also holds the title for home of the largest watermelon in the world – a 268.8 pounder grown on a farm just east of town. And each August, the festival brings in up to 50,000 visitors to the Southwest Arkansas community.
This Hope festival truly embraces everything watermelon. The three-day event features a Watermelon 5K, Miss and Mister Watermelon pageants and a Watermelon Idol – modeled after American Idol. And don’t forget the watermelon eating contests.
But it’s not just watermelons. The festival also celebrates the surrounding arts community, featuring nearly 150 arts and crafts booths. Visitors can also get their fill of locally grown smoked chicken and golden fried catfish. 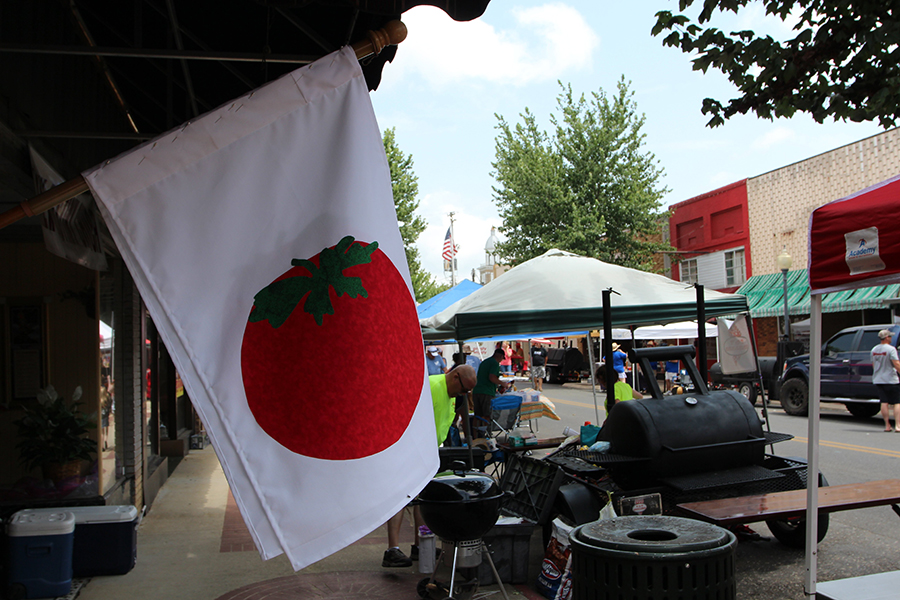 The Pink Tomato Festival, held every June in Warren, is a celebration of the official symbol of Bradley County: the tomato. It’s been grown for sale there by local farmers since the turn of the 20th century, shipping out the fruit (yes, the tomato is the Arkansas state fruit) when the tops had just barely turned pink.
In 1956, a group of merchants got together to host the first Pink Tomato Festival, and the rest was history.
Every year, thousands flock to Warren for the week-long celebration to participate in the All-Tomato Luncheon, the Pink Tomato Beauty Pageant and a little dancing in the street.
The festival also features an arts and crafts show, a 5K race, the Pink Tomato Golf Tournament and, of course, a tomato eating contest.
No food-themed event is complete without live music. And the Pink Tomato Festival has plenty of it, with a number of top performers each year.

Chow Down on Doughnuts! Where to Find Doughnuts in Arkansas
June 5, 2020