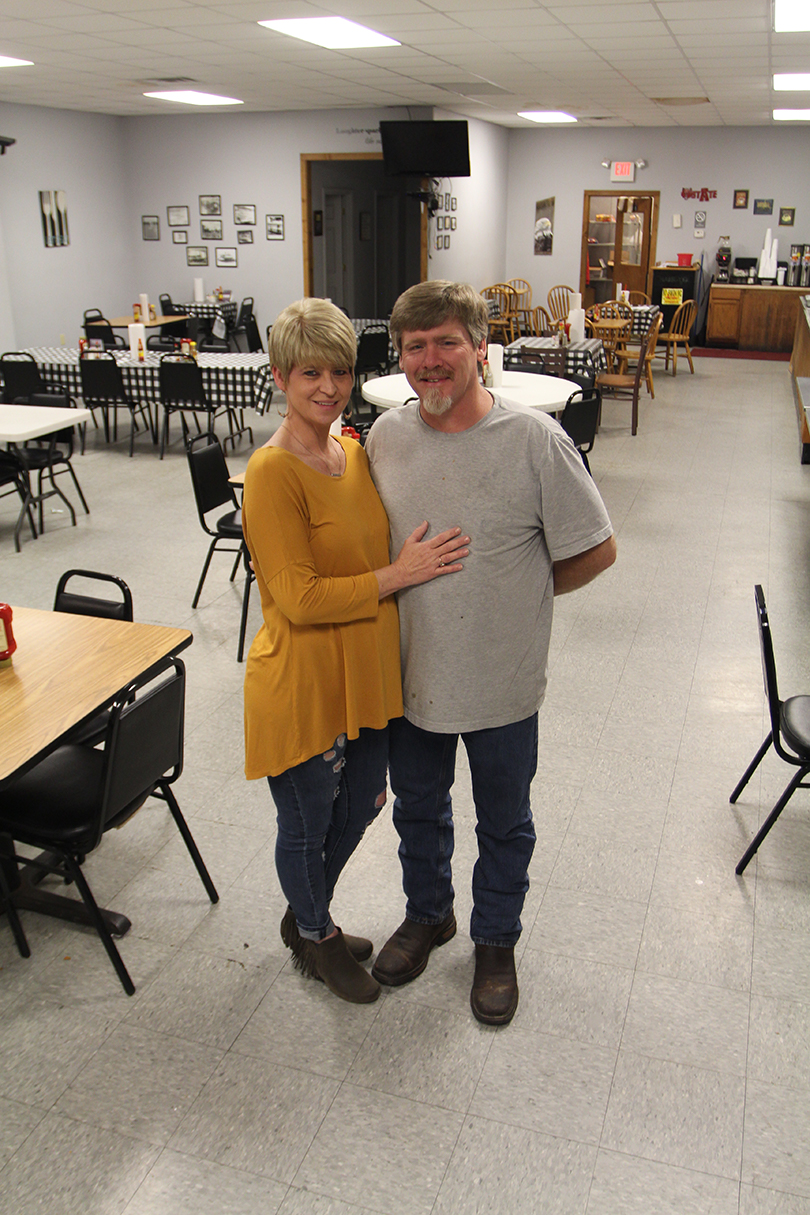 James Jenkins and his wife, Kimberly, in JJ’s Lakeside Cafe.

James Jenkins had a dream to open a handful of barbecue restaurants in the Arkansas Delta. In 2006, he made a deal to utilize a location in a triangle south of Lake Village, just across from the Arkansas Welcome Center. He, his wife Kimberly and a couple of their kids went to work to create a new business, opening JJ’s Lakeside Café in 2007.
In 2012, James moved the business into a long building at the center of the stretch of highway that pulls visitors through the town, across the street from the Sunflower grocery store. Locals came along, too, and visitors who travel US Highway 65 have begun to share with others states away about the spot they need to pull into to get a good meal when they’re on the road.
“I’ve been blessed,” James tells me as we sit down over coffee one afternoon. “We have people who eat here every single day for lunch. We have locals most weekdays. Then on the weekends, there will be folks who stop from just about anywhere. I’ve had friends who’ve traveled to New Orleans who say they heard from others down there about the two things to stop for in Lake Village – Paul Michael’s and JJ’s.”
Over the course of the time we spent chatting, there were folks that passed through from Little Rock, from Lake Providence and from Leland. “Leland’s a lot like Lake Village!” he noted while chatting with a mom and her daughter who had taken advantage of JJ’s anytime breakfast special.
The menu is diverse, with a daily lunch buffet, a seafood buffet on Friday nights, a mess of fried pickles, even excellent pancakes. Burgers are the most popular item.
James and Kimberly recently reopened the second JJ’s, a lunch-only weekday spot in McGehee. But it’s this location where you’ll most likely find James, a lifelong resident of Lake Village.
The restaurant carries a great following, and with lunch seven days a week, travelers know they can always stop in.
When calls for entries went out for the Arkansas Food Hall of Fame, and the people of Arkansas were asked to vote on their favorite restaurant, the largest number called for recognition for JJ’s Café. Tonight, James and Kimberly Jenkins accepted the People’s Choice Award from the Arkansas Food Hall of Fame at a special ceremony at the Ron Robinson Theater in Little Rock’s River Market District. Several of the couple’s children were also in attendance.
The Arkansas Food Hall of Fame announced the inductees for this second year during tonight’s proceedings.

Arkansas Food Hall of Fame: Gone But Not Forgotten
February 28, 2018