Arkansas Food: The A to Z of Eating In The Natural State

BURGE’S SMOKED TURKEYS Alden Burge’s famed turkeys and chickens have been a hit with southwest Arkansas since 1953. Today, you can pick up a magnificently smoked bird at Burge’s locations in Lewisville and Little Rock, both recently deemed Arkansas Food Hall of Fame inductees. The birds are also available on the company’s website, smokedturkeys.com.

CAVENDER’S GREEK SEASONING Spike Cavender’s commercial Greek seasoning is the secret ingredient for many Arkansas delicacies, especially burgers and steaks. In the late 1960s, a dying friend gave Spike Cavender the recipe. Cavender and a friend from Oklahoma made up batches– not to sell initially but to give away to friends. It was so popular that in 1971, Spike and his son Stephen created the S-C Seasoning Company, and Spike’s Greek Seasoning was born. The name was eventually changed to Cavender’s Greek Seasoning. Thirteen spices go into the legendary blend. The Harrison-based company ships worldwide, and you can find Cavender’s on the shelves in grocery stores in Germany, Japan and New Zealand.

CHERUB’S RAPTURE JAM Dennis and Linda Kolb have been producing a fine selection of grape-based jams and jellies with Bear Kingdom Vineyard since 1995. The Kolbs grow their own jelly grapes and also utilize juices and wines from Post Familie Vineyards in Altus in their products. Its most popular flavor, Cherub’s Rapture, is a scrumptious combination of raspberry and cinnamon. All of the Kolbs’ jellies are sugar-sweetened.

ELVE’S PEANUT PATTIES Elve Otwell created the Elve’s Candy Company in Texarkana in 1956 after working for another company that made peanut patties. His pinkish patties became a staple in Miller County. Today, Joe and Shelly Hickey own the company and keep the Elve’s tradition alive, making the patties by the original recipe. Elve’s patties are different from other peanut patties because they utilize absolutely no food coloring – the color of the patty comes from the skins of the peanuts.

GRAPETTE The extraordinarily accessible grape-flavored beverage and its fraternal twin, Orangette, can be found at Walmart stores everywhere as the house brand. One of the original Fook’s Flavors, this grape-flavored soft drink was first produced and marketed in 1939 in Camden by Benjamin Tyndle Fooks. The soft drink started as a syrup added to a carbonated base before being fully integrated into soda bottles in the 1950s. Licensing for the product led to its disappearance from U.S. shelves in 1977. That wouldn’t do for Grapette fan Sam Walton, who reached an agreement to obtain the recipes in the late 1980s. Since 2005, the beverage has appeared under its original name.

HOUSE OF WEBSTER House of Webster in Rogers is a particularly popular purveyor of all things jelly and preserves. Opened in 1934, this longtime Rogers standard offers jams, jellies, pickles and butters to the world along with world-class bacon, mixes and mustards.

J&M CHEESE STRAWS A Little Rock woman and her daughter brought what was once a homemade snack to new heights.

KYYA CHOCOLATES Divine chocolate? You can find extraordinary bean-to-bar creations all across Arkansas created by Kyya Chocolate. Originally began in 2012, this Springdale company meticulously curates chocolates from hand-picked cacao beans sourced directly from farmers from many of the 85 cacao producing countries around the globe. The chocolate takes 72 hours to prepare single-origin bars, baking bars and cocoa powder, sauces and syrups. 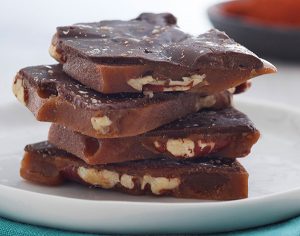 LAMBRECHT GOURMET TOFFEE David Smith started making pecan toffee for holidays for friends and family. When he started managing the Red Apple Inn, owner Patti Upton asked him to make it to sell at Aromatique’s shop. Today, he and his wife, Nancy, own Lambrecht Gourmet Toffee. Its award-winning artisan chocolate-covered toffees come in many flavors. 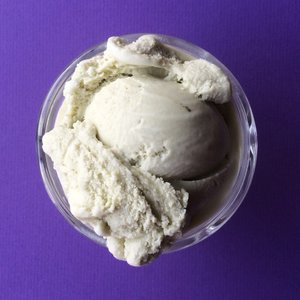 LOBLOLLY CREAMERY This ice cream maker produces its flavors from local items with flavors such as lemon berry icebox pie, orange crème fraîche, cucumber cooler sorbet and Little Rock-y Road. Its flavors are available at many regional markets, as well as at its flagship store on South Main in Little Rock.

MONK SAUCE Father Richard Walz brought back habanero pepper seeds from his tenure in Belize and planted them at the monastery at Subiaco. In 2003, Monk Sauce hit the market. The significant heat in these sauces comes from the extra time and care spent with the peppers.

MOUNTAIN VALLEY WATER Originally bottled by Benjamin and Enoch Lockett in the 19th century, Mountain Valley Water has made it to the tables of some of the finest dining establishments in the world. Both sparkling and spring water versions are available everywhere; flavored versions such as blackberry pomegranate and lime twist can be ordered directly from the company. 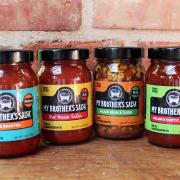 MY BROTHER’S SALSA My Brother’s Salsa has become popular across Northwest Arkansas. Helen Lampkin took a recipe from her brother and started a company that now offers varieties covering a spectrum of flavors with Black Bean and Corn, Cranberry Orange, Tomatillo and Fire Roasted options.

PAR EXCELLENCE RICE Producers Rice Mill, based in Stuttgart, puts out ParExcellence brand of rice and blends, including the marvelous Garden Harvest, which is a rice blend mixed with dehydrated vegetables and herbs.

PETIT JEAN MEATS The Morrilton-based company brings ham, sausage, bacon, hot dogs and more to Arkansas grocery stores. The high-quality products are readily available here but are also popular with Arkansas natives and ex-pats who utilize the company’s mail-order system to bring a taste of home to folks outside our borders.

PINK HOUSE ALCHEMY This Fayetteville operation offers a variety of mixers that give that extra special something to create an extraordinary version of any mixed drink. Pink House alchemy aims at finding the connections between foods and flavors to conjure original and delectable syrups (which add sweetness), bitters (which add pungent flavors) and shrubs (which add acidity) for beverages.

PLANTERS PEANUTS Did you know peanuts are the 10th largest crop in the state of Arkansas? Since 2010, the acreage of peanuts planted in Arkansas has increased from 560 acres to more than 30,000 in 2017. Planters Peanuts are processed for a variety of products in Fort Smith, one of two locations for the company  (the other is in Suffolk, Virginia.).

POZZA’S PASTA Hailing from Tontitown, the recipe for these noodles comes from the original Italian settlers who came to the region in the late 19th century. Alison and Lucius Mhoon’s operation offers several varieties of spaghetti, linguini and angel hair pasta. 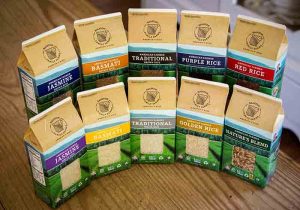 RATCHFORD FARMS Continuing the centuries-long practice of preserving meat through smoking, Ratchford Farms offers not only quality beef jerky but snack sticks created from the farm’s organically raised buffalo and elk. They can be found in grocery stores, convenience stores and truck stops all over the state. 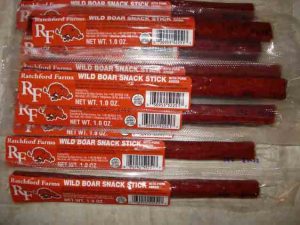 RICELAND RICE Riceland Foods is the world’s largest miller and marketer of rice. Based in Stuttgart, it produces a large number of rice products from mixes to a fine rice bran oil which does marvelously as fish fry oil.

ROBBI’S SALSA Central Arkansas folks know they can get a really good mild or spicy salsa from Robbi’s Salsa. Very close in flavor to the old JR’s Restaurant variety from the 1980s, Robbi’s is rich and thick.

TCBY FROZEN YOGURT Frank Hickingbotham started This Can’t Be Yogurt in 1981 in the Market Street Shopping Center on Rodney Parham – a clean white counter and some soft-serve machines that doled out soft frozen yogurt. At that point in time, there were no frozen yogurt chains. Hickingbotham’s creation grew to seven locations in 1982, then 400 in 1986, and over 800 in 1987. A tiff with a similarly-named restaurant in Texas forced a name change to TCBY. After reaching 3000 locations, the chain cut back and was eventually purchased by Mrs. Field’s. Today, there are around 475 locations nationwide including several in Arkansas. 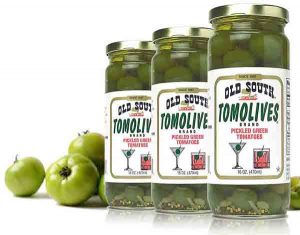 TOMOLIVES While working on pickled products for the Atkins Pickle Plant in the early 1950s, Robert Switzer came on to a new idea – pickling tiny green baby tomatoes. The resulting Tomolives became a popular addition for mixed drinks. The little globes taste a lot like pickles but with more salty punch. The Bryant Preserving Company of Alma makes these, along with a host of other pickled vegetables, under the Old South name today. 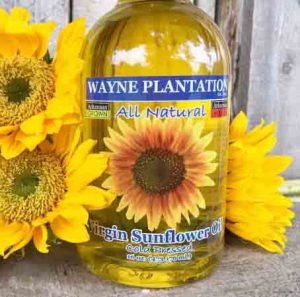 WAYNE PLANTATION SUNFLOWER OIL The Wayne Plantation, founded in 1889 in Scott, is in its fourth generation. The family grows NuSun Mid Oleic Sunflowers, which produce an all-natural, non-GMO cold pressed extra virgin oil full of Vitamin E. Bottles can be found at retailers all over Arkansas.

Each of these Arkansas food brands are featured in Arkansas Food: The A to Z of Eating, which is available at Wordsworth Books,
Honey Pies, eggshell kitchen co.,  Historic Arkansas Museum, PattiCakes Bakery and other local retailers.