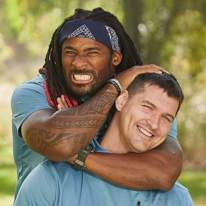 Arkansas native DeAngelo Williams is no stranger to running.

After all, he spent years sprinting past linebackers as a running back for the Carolina Panthers and the Pittsburgh Steelers. Now, he’ll be putting those skills to use in a different kind of competition: the Amazing Race.

Williams, who grew up in Wynne, is partnered up with his former Carolina Panther teammate Gary Barnidge for Season 32 of the Amazing Race.

In this reality show, Williams and Barnidge, along with 10 other teams, will travel the globe, competing in challenges each week. Teams that fall behind will be eliminated.

At the end of the show, the competitors will close in on their final destination. The prize? A cool $1 million.

Starting from the Hollywood Bowl in Los Angeles, the participants headed south for Trinidad and Tobago in the first episode. They will continue their travels, making their way through Brazil, France, Germany, Kazakhstan and other exotic locales.

Williams said that he is excited to compete for the top prize while making his way around the world.

“I look forward to the sport and the competitive aspect of it. Since I have been retired from professional football, I have missed the competition,” he said in a CBS interview.

Williams graduated from Wynne High School as a top running back prospect and attended the University of Memphis, where he was a Heisman Trophy nominee. He was drafted to the NFL in 2006, joining the Carolina Panthers.

During his NFL career, Williams rushed for 8,096 yards and 61 rushing touchdowns. He also had 236 receptions for a total of 2,106 yards and nine touchdowns.

After nine years at the Panthers and two for the Steelers, Williams retired from the NFL.

The show will be broadcast at 7 p.m. on CBS.