Love Dogs? The Arkansas Paws in Prison Program Will Melt Your Heart

Many of the state’s orphaned dogs are getting a second chance through a nonprofit program that saves dogs in kill shelters from being euthanized. The wet-nosed, faithful companions are finding refuge in an unexpected place, a place full of compassion and tenderness that promises a loving home: inside the gates of six prison units in Arkansas. 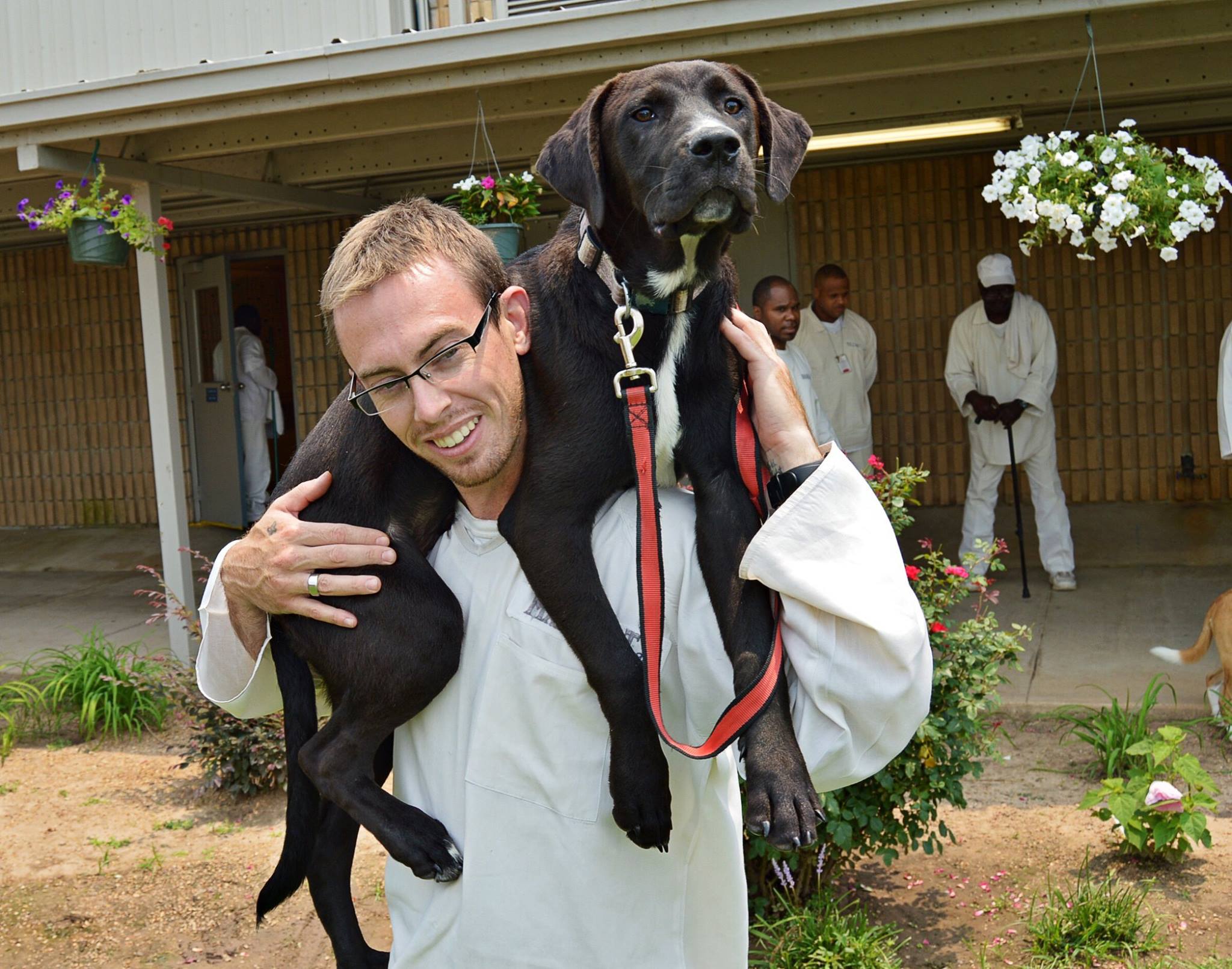 The Arkansas Paws in Prison program pairs rescue dogs with inmates across the state. The program was founded by dog lovers Mary Parker, Board of Corrections Vice Chair; Dina Tyler, former ADC Assistant Director; Shea Wilson, ADC Public Information Officer; and Renie Rule, University of Arkansas for Medical Sciences executive director of development. The cohort started the program in 2011 after they took a field trip to Missouri where a similar program operates. Rule is the program’s founding patron; her initial personal donation helped jump start the nonprofit program, which is funded by the sale of recyclables and donations. There is no state budget for the Paws in Prison program. 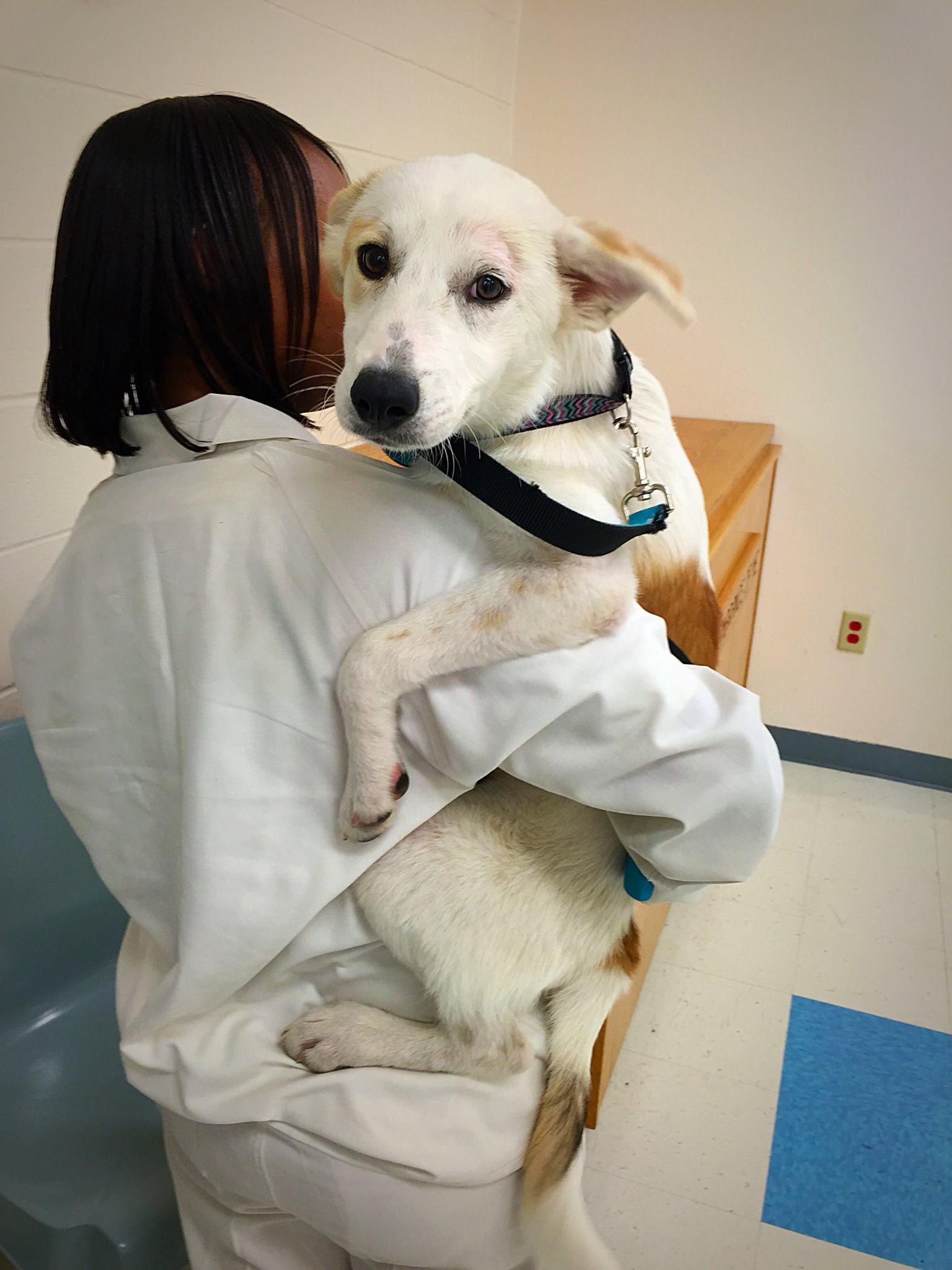 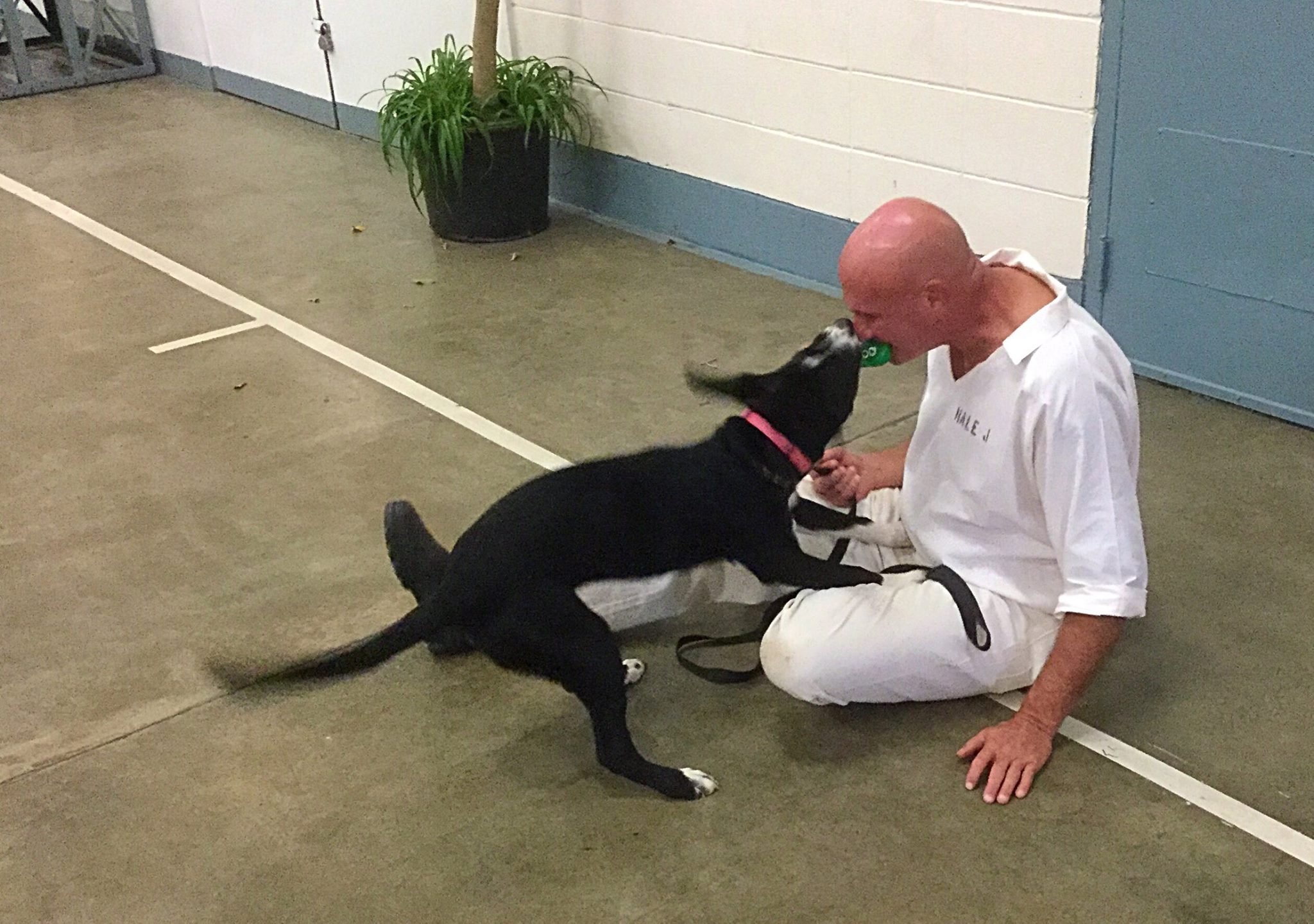 The trainers get to name their dogs, and they also care for and live with the dogs — the dogs sleep in kennels next to the inmates’ beds. 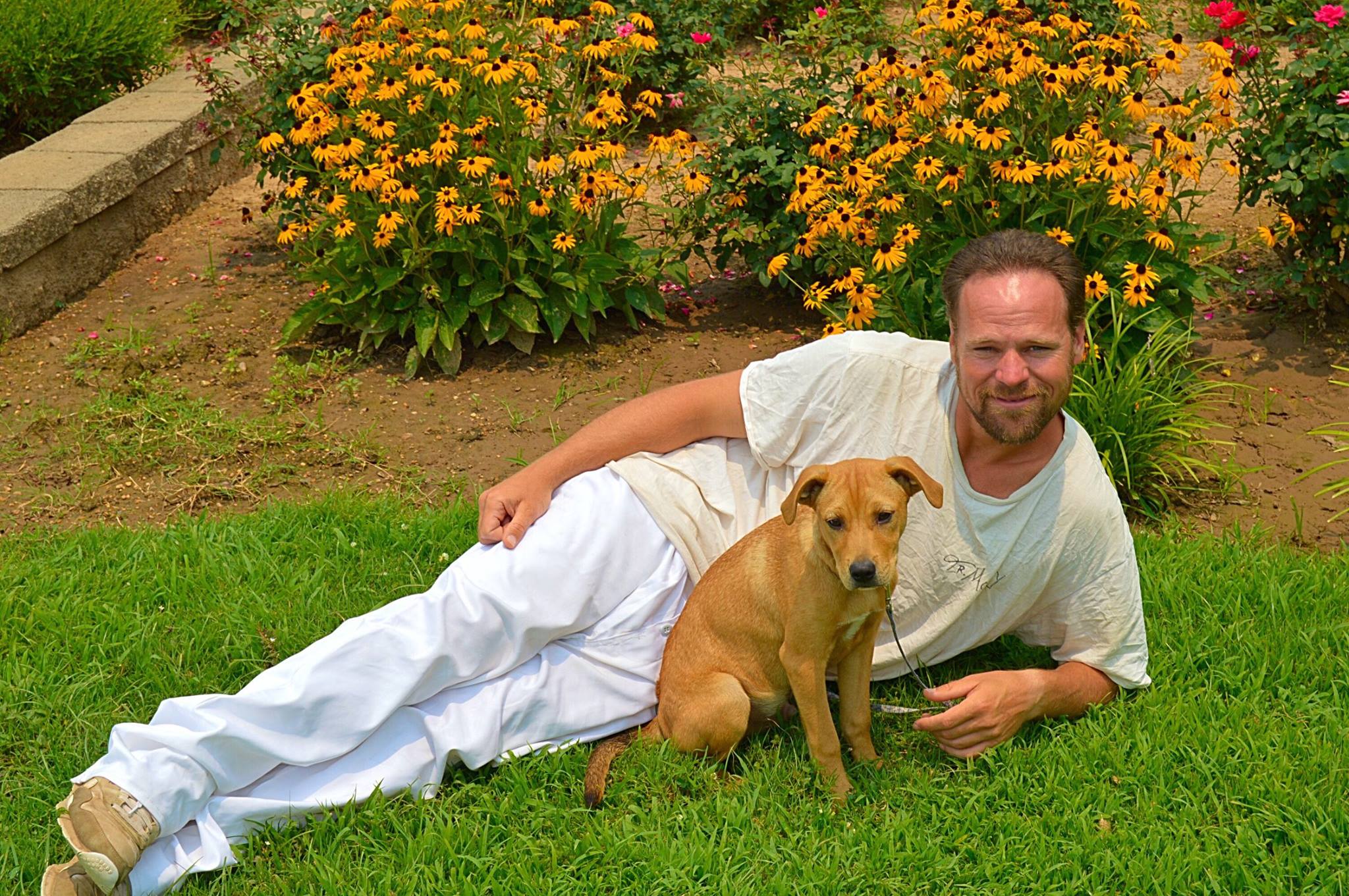 The day-t0-day schedules of the prisoners and pups are full of valuable and adorable activities: the inmates dress the dogs, teach them how to dance and “say their night prayers,” give them obedience training and even paint with the dogs. The inmate-and-dog-produced masterpieces are sold to fundraise for the Paws in Prison program. 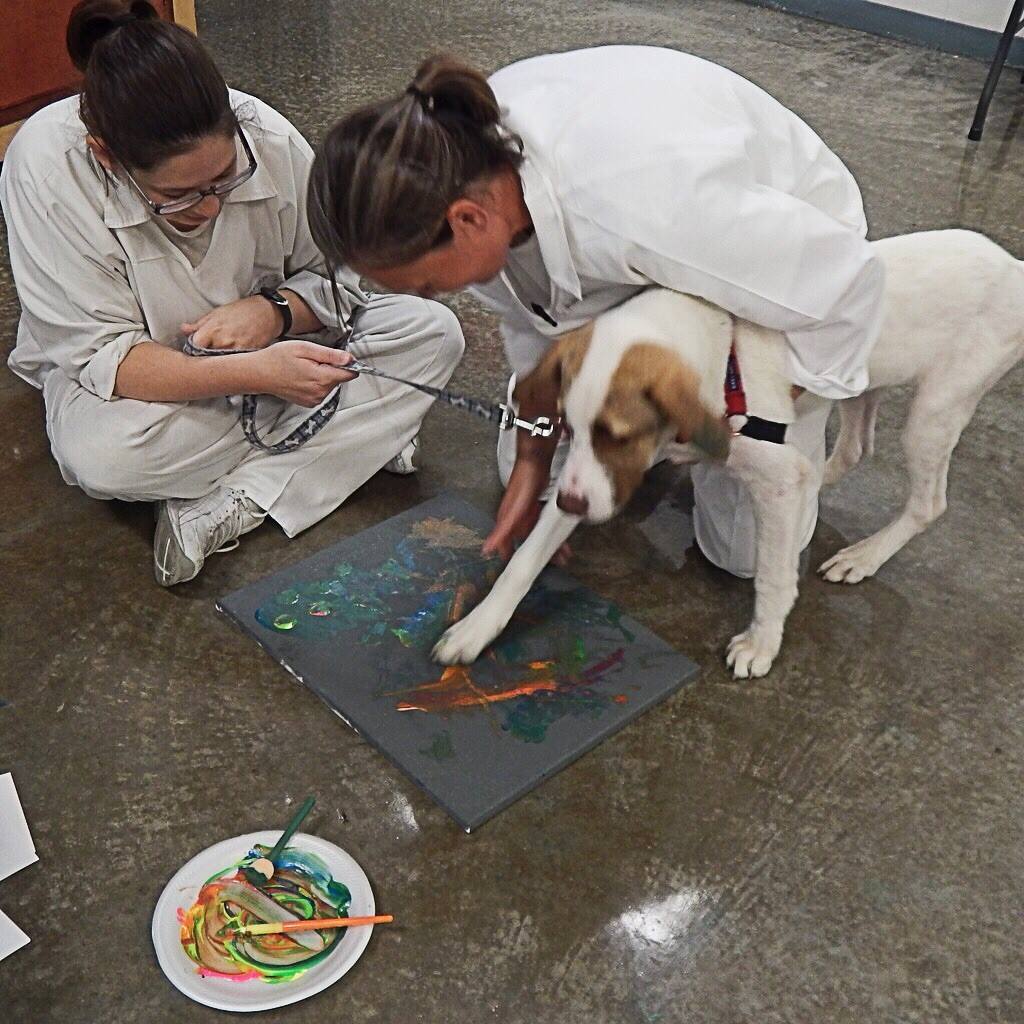 Despite their busy days, the dogs “have a schedule that allows for potty breaks,” said Cathy Frye, Public Information Officer at the Arkansas Department of Correction. 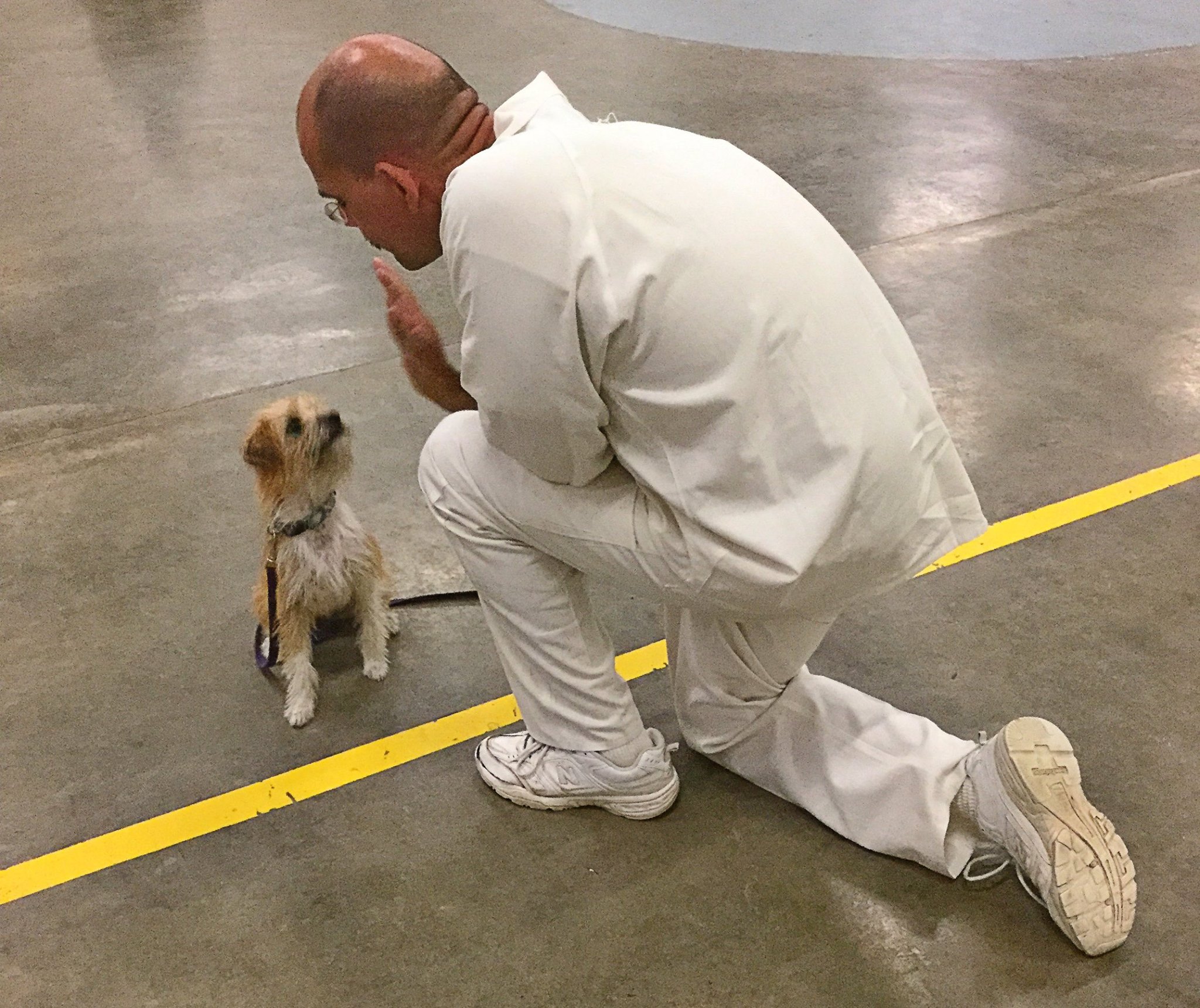 Inmates are also responsible for socializing the dogs, an important component of the program that readies the dogs for their forever homes.

Here we have the dogs from RLW Unit playing in the morning sunshine this first full day of summer. These are the real DOG DAYS OF SUMMER! Pool action and running was nice to see. Bear and Gabby didn’t seem to be active pool members. Mercy and Nikki however couldn’t get enough of it. Enjoy!

The inmates have found lots of meaning in the program, Frye said, noting the difference it makes in the inmates’ daily lives. One inmate had not pet a dog in 19 years before the Paws in Prison program, she said, “[the program] allows them to pay back society for what they’ve done.” 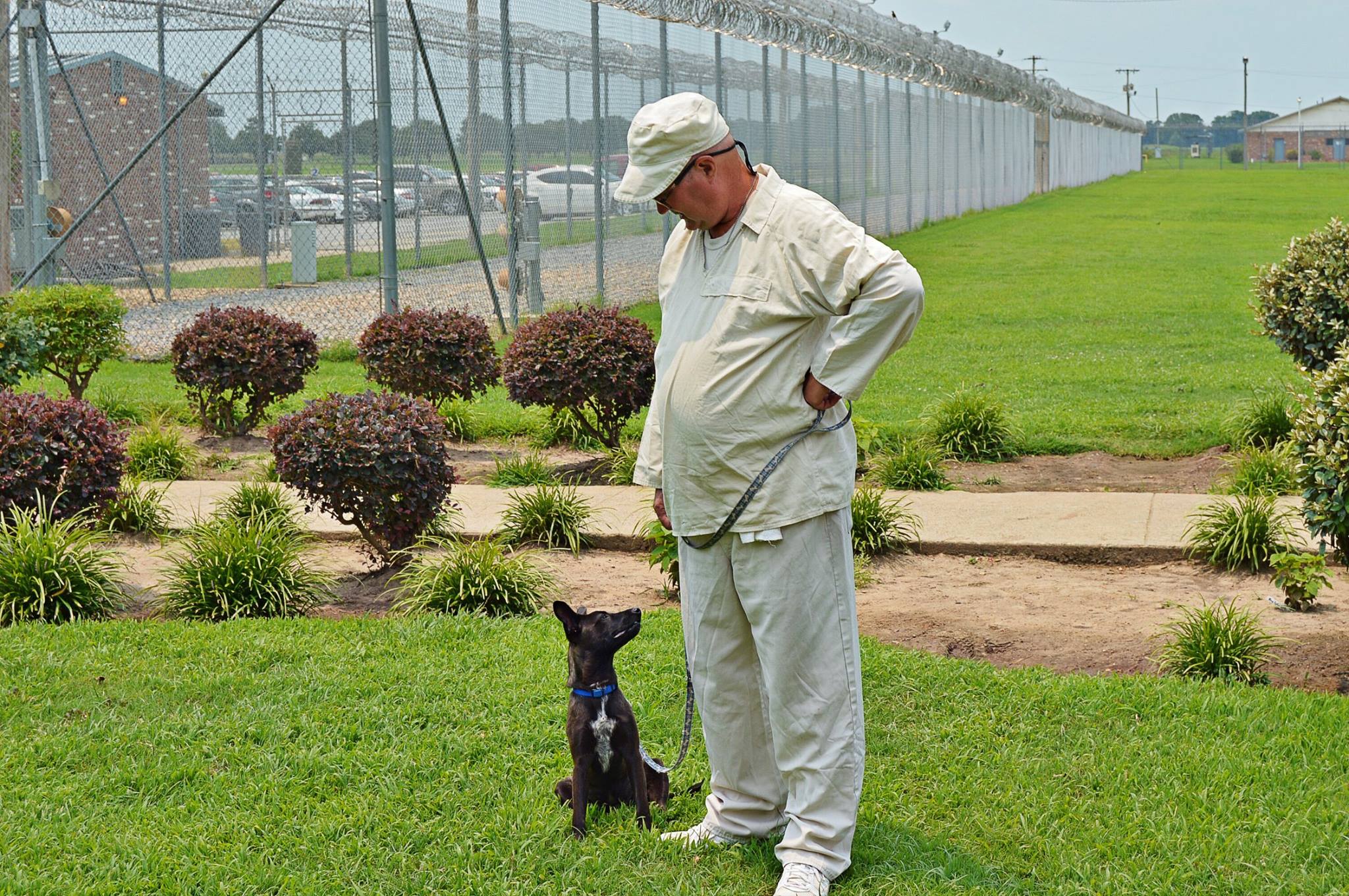 After weeks of training, the once-stray dogs are now well-loved and well-mannered, and they are ready to take the 10-step test to earn the Canine Good Citizen Award by the American Kennel Club. The award, known as the gold standard for dog behavior, tests the dogs’ obedience, agility and performance. All of the dogs in the Arkansas Paws in Prison program earn the award, and are granted a certificate and the official AKC CGC title after their names. 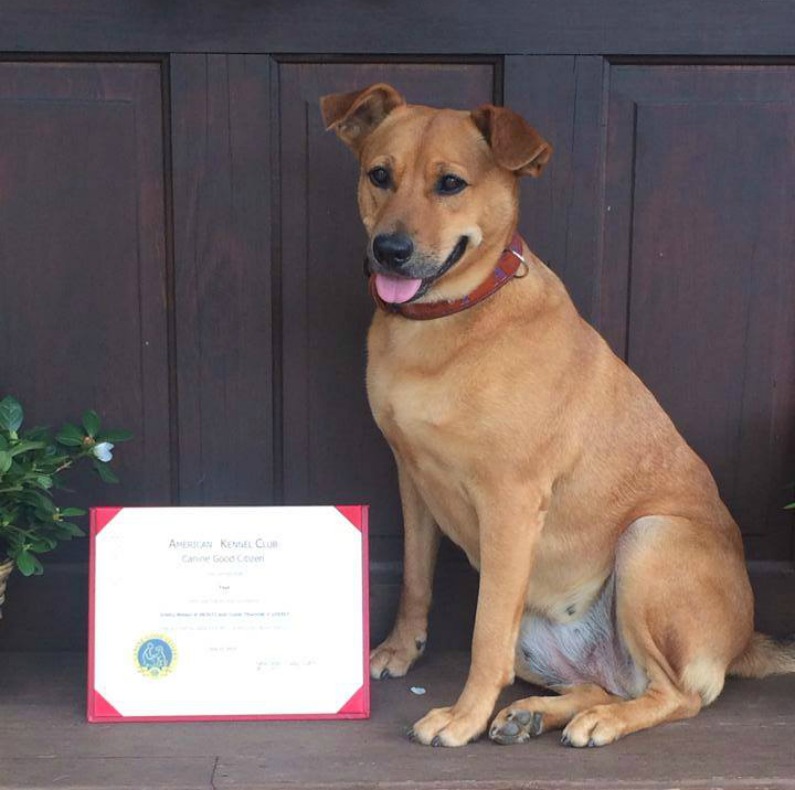 By the end of the eight-week program, the dogs are more than prepared for life with their adopting families. 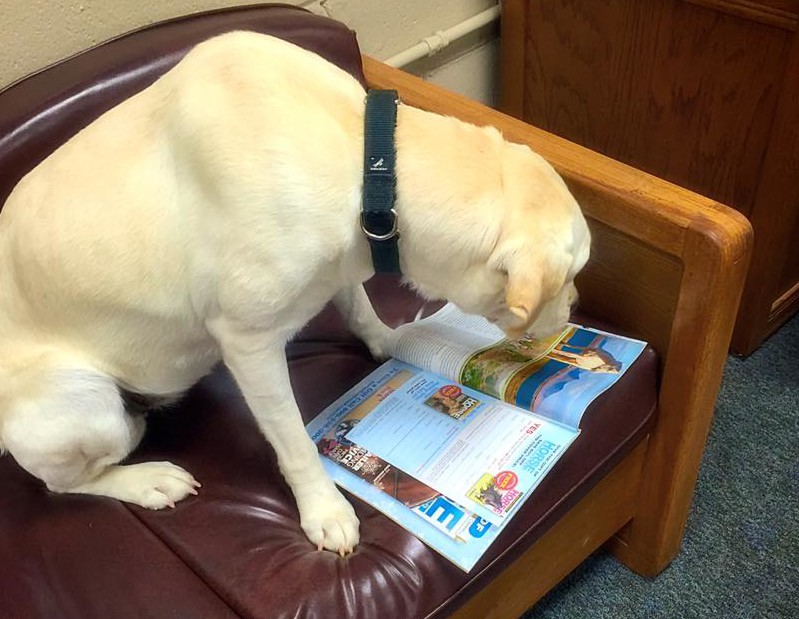 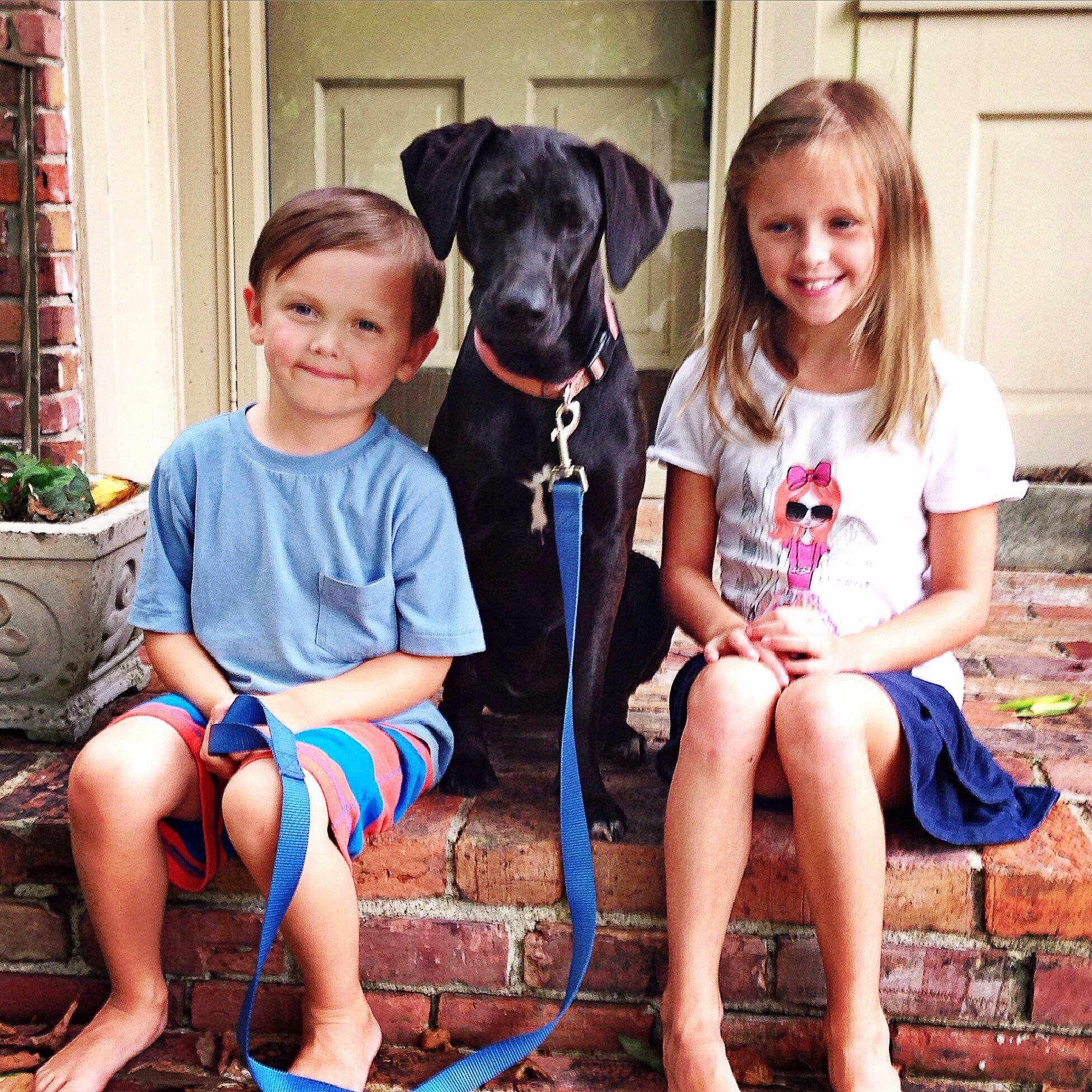 (7/9 on the Paws in Prison FB page): We think there’s a very good chance that there’s a whole lot of spoiling going on in Little Rock tonight. That’s because the lovely Miss Arya is in her forever home with her forever family. And if that’s not wonderful enough…Arya gets not one, but two siblings. A girl and a boy! You know she’s in heaven with that many people to love on and play with. Here’s wishing the whole family years of good times, great adventures and lots of hugs and kisses! 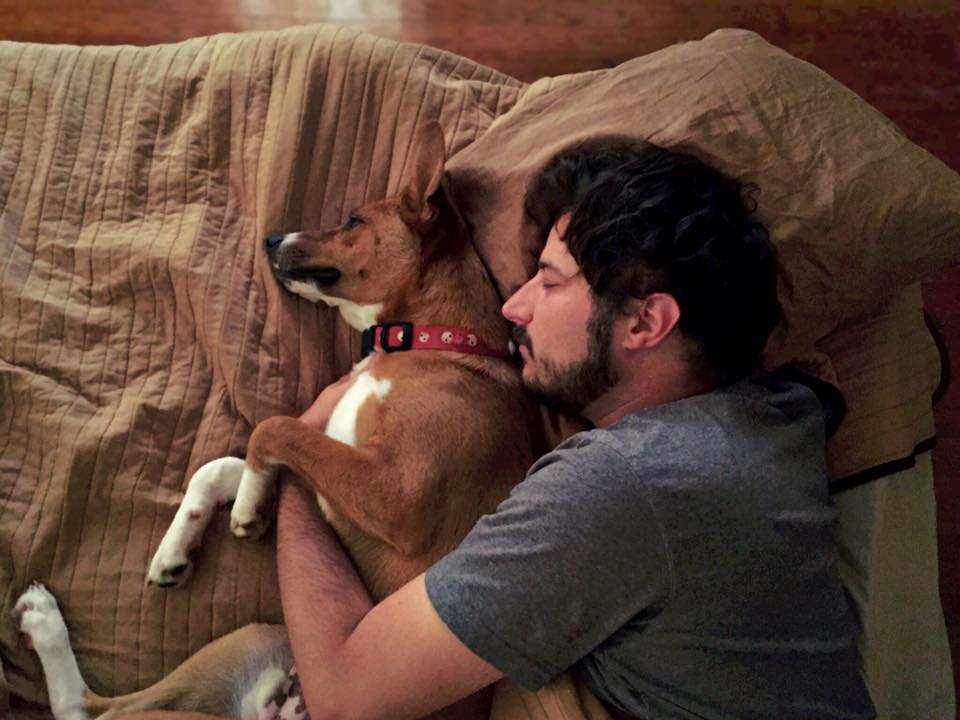 (7/22 on the Paws in Prison FB page): Tonight, Chapter of two of “When Two Gentlemen Met…the Story of Gabe and Isaiah.” Last night we told about filmmaker Gabe adopting Isaiah on the spot at the Tucker Unit. Gabe had come to take pictures and left the new owner of Isaiah, a dog somehow passed over for adoption. At Gabe’s home, Isaiah was understandably nervous and unsure. The Tucker Unit had been his home for months, so it’s going to take a little time for him to settle in at the new place. As this first night wore on, the dog was too unsettled to sleep. And his Dad was too worried about him to get any rest. About 2:00 in the morning, Gabe got out of bed to spend some time with Isaiah…to ease his worries and to reassure him that everything would be just fine. New always takes some getting used to. It’s that way for everybody. More than four hours later, Gabe’s girlfriend, Rachel, awoke to find this…her two guys curled up together and sound asleep on on the bedroom floor. This apparently was exactly what Isaiah needed. Because today, Gabe reports that Isaiah is relaxing. He’s responding to commands. His appetite is back and that tail of his is beginning to wag. So hang in there, Gabe and Rachel. In a week’s time it will seem like Isaiah has always lived there. And in a month’s time, you’ll wonder how you ever lived without him.

On the last day of the program, the dogs “graduate” in a ceremony attended by the dogs, inmates and adopting families. The families have the opportunity to meet the inmates who have been caring for their dogs, and the inmates leave the adopting families with a special token of the program: a hand-written journal in which they’ve documented their dog’s progress, tricks they have learned and fond memories of their dog. 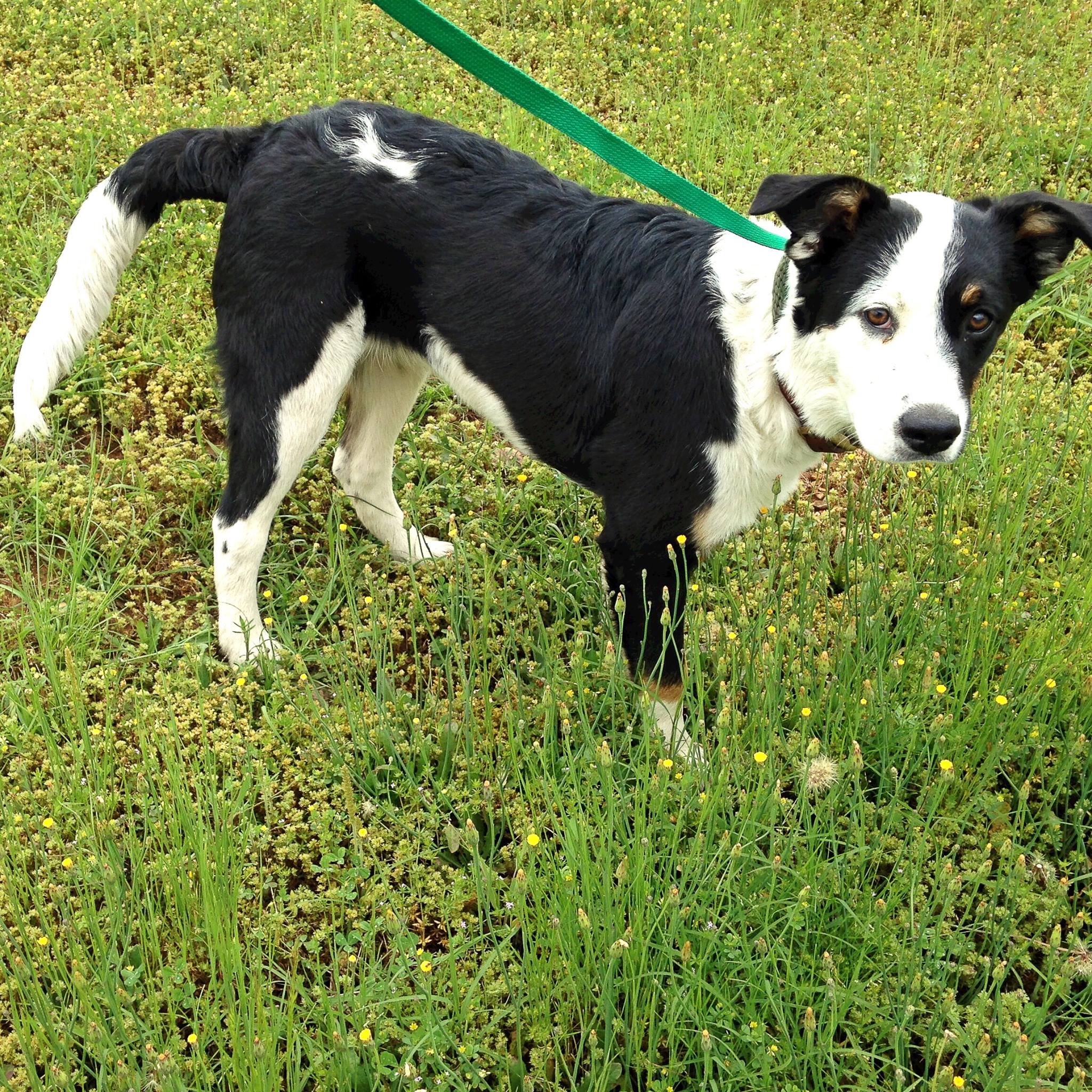 On graduation day, inmates meet the next group of newly rescued four-legged fur friends for whom they will be caring and loving for the next eight weeks. 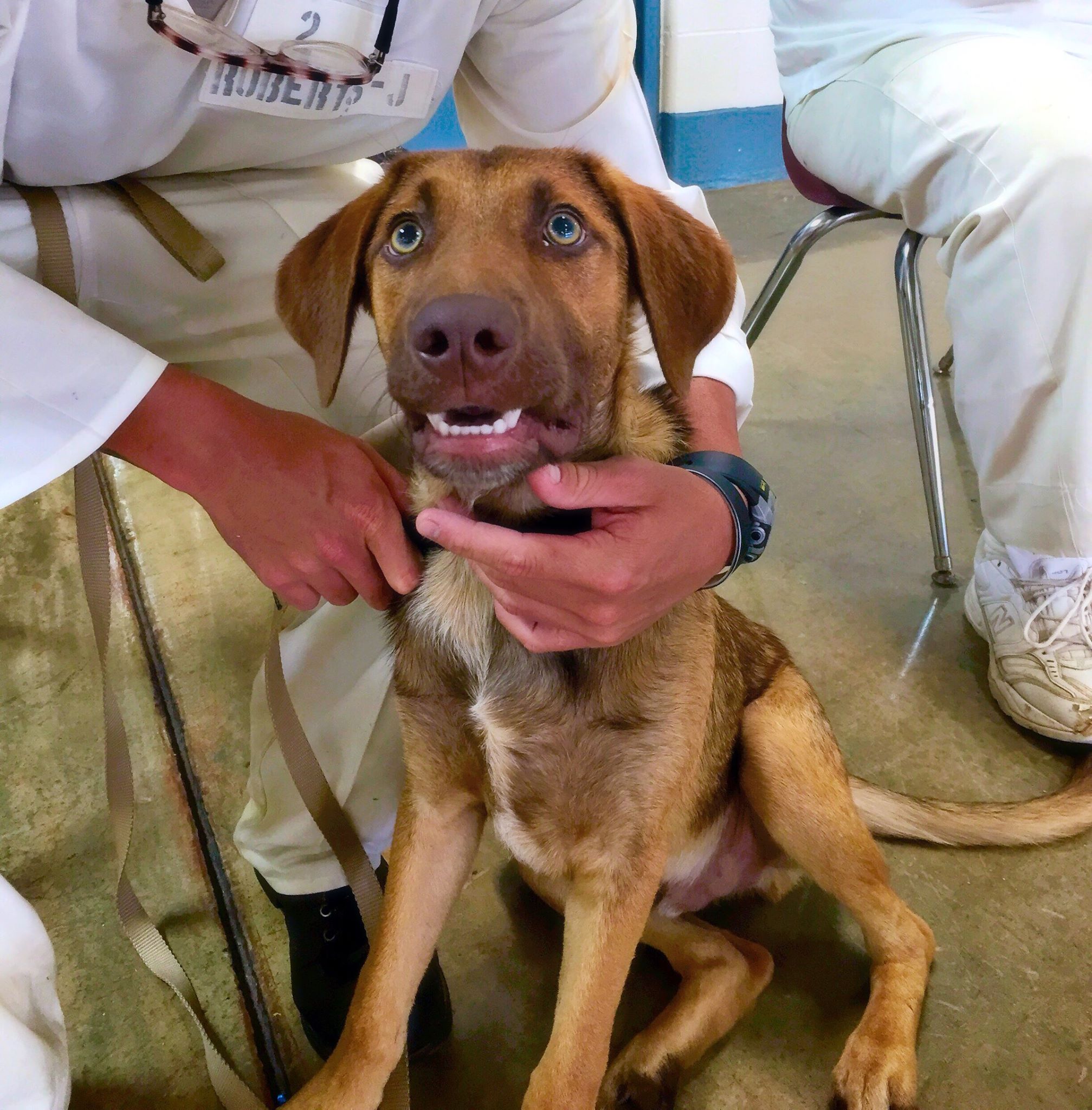 Since the program’s inception, over 600 dogs have been rescued, trained and adopted. 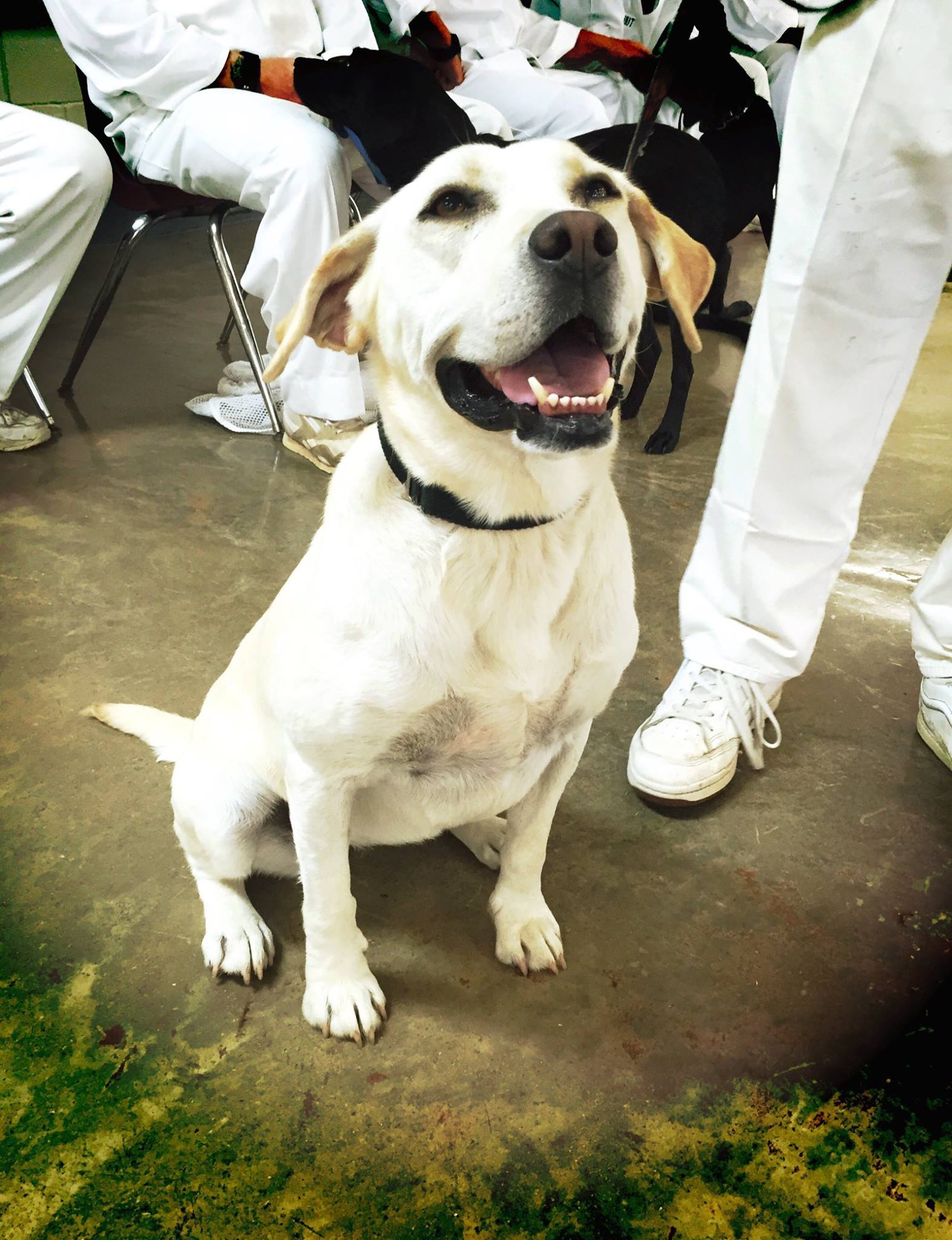 This month, the Paws in Prison program is celebrating its 4-year anniversary with its first-annual “Ruff” Rock N’ Roll benefit. The benefit will serve as a fundraiser and birthday party for the program, and will welcome many of the beloved program graduates to the event. The event is open to the public, and all dogs are welcome to attend and enjoy the designated pool & play area. The dance floor will be open to dogs and humans. The adult-only, bring-your-own-dog event also caters to guests with wine and beer, Whole Hog barbecue, a live auction and the Cummins Prison Band, an inmate band that performs around the state. Guests will also have the opportunity to buy some of the artwork composed by the inmates and their dogs. The benefit starts at 3:3o p.m. on Oct. 17 at the Scott Plantation. Tickets are $50 and can be purchased here. All proceeds will benefit the Paws in Prison program. 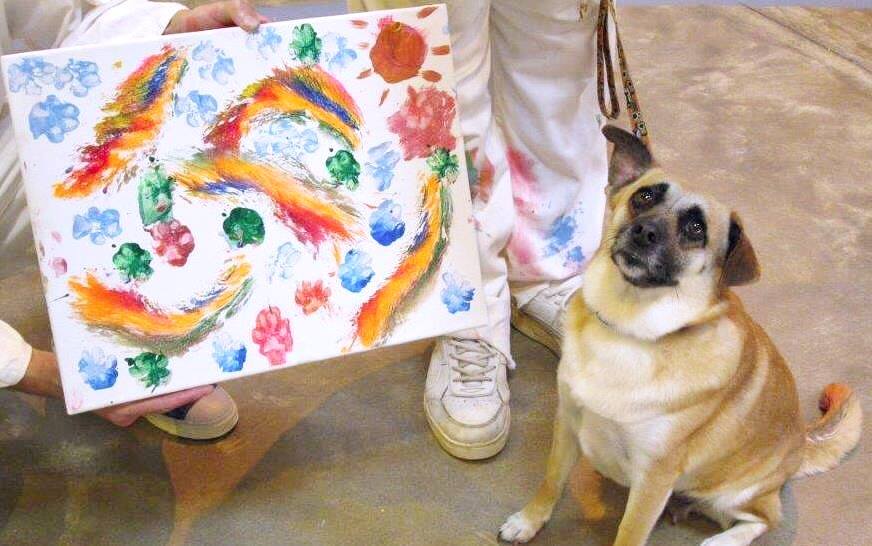 Sweet closeup of a sweet girl. This is Pippy. Pippy Greystocking. Beautiful heeler mix with an outstanding coat. Pippy…

Posted by Arkansas Paws in Prison on Tuesday, September 29, 2015