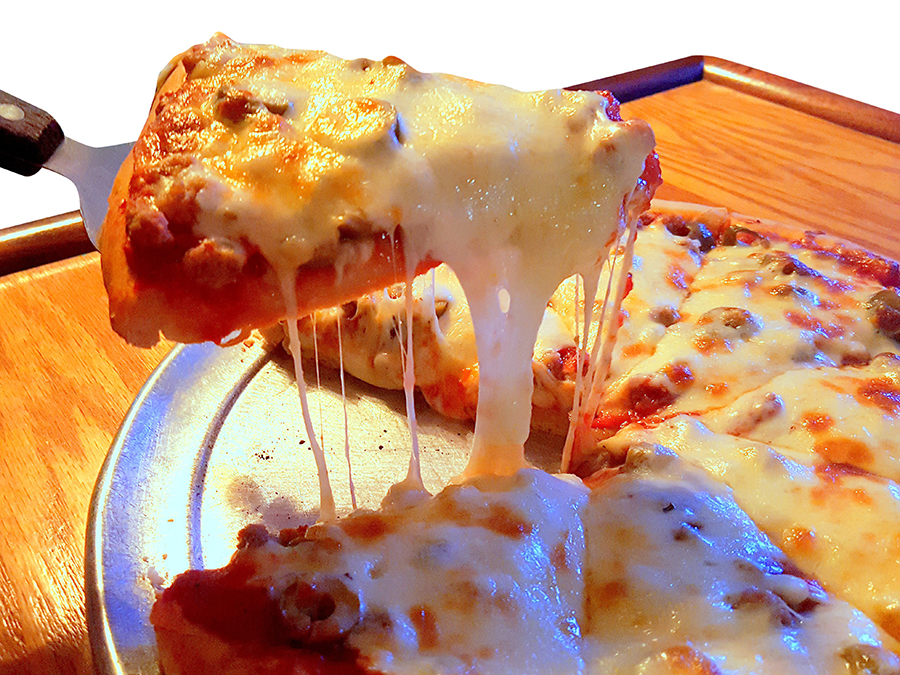 You can’t judge all Arkansas pizzerias against each other pie-to-pie. There’s a lot of difference between DeLuca’s tomatoes-from-Italy sauce and Tommy’s Detroit-style, between Iriana’s thin crust and Steffey’s Uncle Roman. But you can say yes, these are the pies that we crave when we’re thinking about a savory Italian-style pie in The Natural State.

In alphabetical order, here are the pizza places we adore most: 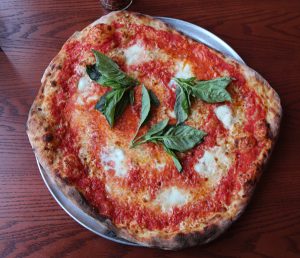 DeLuca’s Pizzeria Napoletana
407 Park Avenue, Hot Springs National Park, AR 71901 501.609.9002 | delucashotsprings.com
A sauce of kosher salt and tomatoes from Naples. A simple dough. Lumps of fresh Mozzarella. A high-heat oven. Simple ingredients are rendered extraordinary in the hands of Anthony Valinoti, the former businessman turned pizza troubadour, whose singular energy elevates every dough-borne creation to a communal experience amongst friends. Arrive early on weekend days to secure a dough before they run out (though choosing the oven-baked pasta instead is also quite grand). Napoli-style (high heat), thin crust. 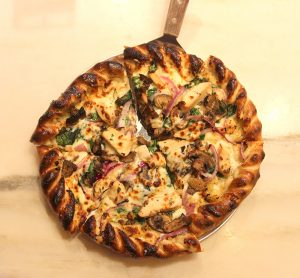 Grateful Head Pizza
Oven and Beer Garden
100 Exchange Street, Hot Springs, AR 71901
501.781.3405 | gratefulheadpizza.com
Be ready for a climb to get to this tiny restaurant above Hot Springs Bathhouse Row, itself surrounded by layers of terraces. Shared pies are to be celebrated, as is the unique choice of a blue cheese sauce on the Blue Rooster, which pairs remarkably with roasted garlic and onions, chicken and that braided edge crust. Second location; original in Oklahoma. Medium crust, gluten free available. 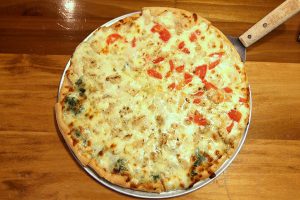 House of Pizza
40 Plaza Way Suite 26, Mountain Home, AR 72653
870.492.2351 | houseofpizzamh.com
Mountain Home’s modern pizza joint does a variety of different sauces, including a decent Alfredo and a barbecue sauce, on a thin-to-medium crust. Varieties include an Artichoke Spinach Alfredo with chicken and lots of garlic. Medium crust, gluten free available. 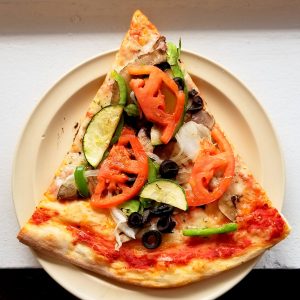 Iriana’s Pizza
201 East Markham Street, Little Rock, AR 72201
501.374.3656 | irianaspizza.com
Downtown Little Rock’s longtime cracker-crust standard offers the famed Sweep the Floor for those wanting a bit of everything. The alternative Plow the Garden complete with its array of vegetables is equally satisfying. Slices available as well as whole pies. 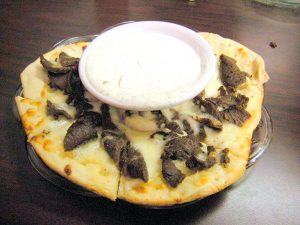 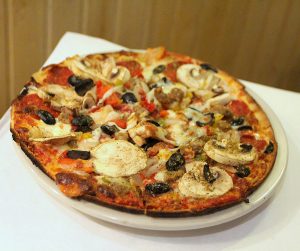 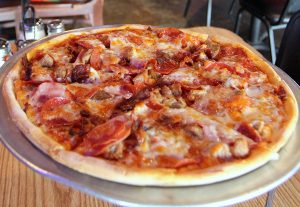 Mojo’s Pints and Pies
1200 Garland Avenue #7, Fayetteville, AR 72703
479.935.3459 | mojospintsandpies.com
Imagined as a great spot for locals and the music scene, Mojo’s pizzas are finally getting their proper acclaim. The thin-to-medium crust is topped with so many great options in both the specialty selections and the unusual ingredients list (honey drizzle, ghost sauce, yellow squash) is come-back good.
Medium crust, gluten free available. 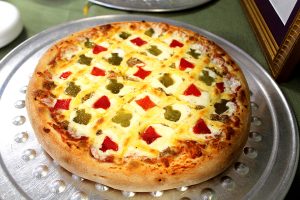 Nima’s Pizza
109 South School Place, Gassville, AR 72635
870.435.6828 | nimaspizza.com
The world’s second-best pizza (as determined at the International Pizza Challenge, where Rick and Jane have taken the second-best prize FOUR TIMES) comes in both traditional versions and the many selections that have earned notice far and wide. Crazier options include a 2017 runner-up Reuben-inspired corned beef and sauerkraut pie; Loaded Baked Potato with bacon, sweet onion and tomato on olive oil; and an award-winning Spinach pie with roasted garlic white sauce, spinach and cheese. 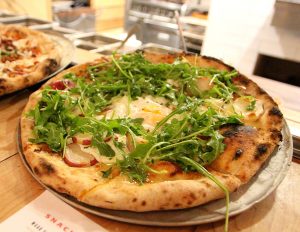 Oven and Tap
215 South Main Street #3, Bentonville, AR 72712
479.268.5884 | ovenandtap.com
Ever had an egg on your pizza? Arugula? Fresh rosemary? Eager and innovative pioneers of high-heat pizza baking are adding new ingredients to the palate at this hip and nifty spot where everything from ale to espresso is on tap and where the pies coming to table are as colorful as the individuals behind the counter.
Napoli-style (high-heat), wood-fired, thin crust. 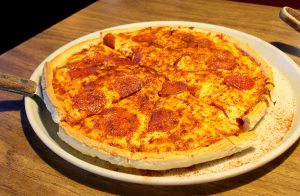 Papa’s Pub
508 Garrison Avenue, Fort Smith, AR 72901
479.783.9941 | papaspub.com | 21 & older only
Garrison Avenue’s prime spot for pool and televised sports offers the classic pub-style pie, a medium-to-thick offering a range of crowd pleasers, including the double-pepperoni Goob’s Special, with its thick shaking of Rib Room rub over the top. Just remember the rules – no cell phones on the east side and no playing the jukebox while Jeopardy’s on. Medium crust. 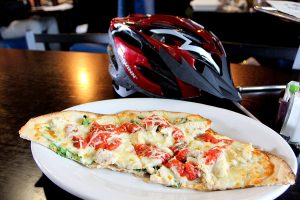 Peddler’s Pub
410 Southwest A Street, Bentonville, AR 72712
479.268.3285 | peddlerspub.com
This bicycle-themed spot isn’t just for the two-wheeled crowd. Its super-high-heat white and red oak-fired oven bakes pies in two to three minutes, which means you’ll be in and out back on the path in record time. An ample topping selection that includes ribeye steak, Petit Jean ham, artichoke hearts, shiitake mushrooms and shaved parmesan coasts this joint over the top.
Wood-fired, thin crust, gluten free available. 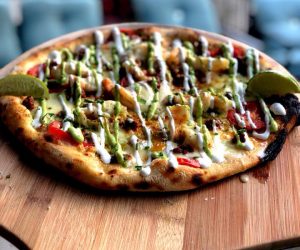 The Pizzeria in the Heights Napoli-style (high-heat), thin crust.

The Pizzeria in The Heights
4910 Kavanaugh Boulevard, Little Rock, AR 72207
501.551.1388 | pizzeria-santalucia.com
The ultimate in fancy-pants pizza, this gourmet shop on Kavanaugh gives you the opportunity to try 21st century combinations on a thin hot crust – like shrimp scampi, smoked salmon, chorizo, or Petit Jean bacon. The goat cheese cream sauce is a lovely departure from traditional white sauces. Have dessert while you’re there.
Napoli-style (high-heat), thin crust. 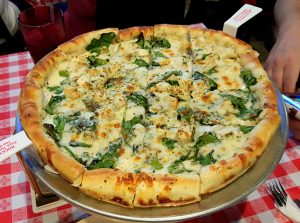 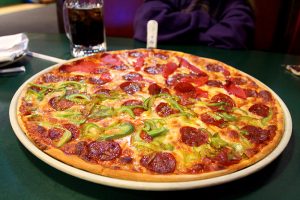 Rod’s Pizza Cellar
3350 Central Avenue
Hot Springs, AR 71913
501.321.2313 | RodsPizzaCellar.com
Whether you choose the biscuit-textured thick or the crispy thin crust, Rod’s longtime family favorites are the perfect straight-out-of-the-70s retro kick you need to wrap up a day at Magic Springs or a lake adventure. Try the house-made beef pepperoni. 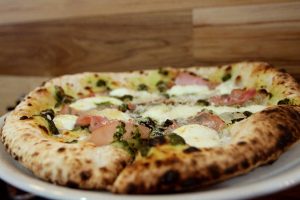 Sauce(d)
11121 North Rodney Parham Road #9a
Little Rock, AR 72212
501.353.1534 | saucedlr.com
The interior may be loud (10 oversized screens!) but the pizzas offered at this brand new West Little Rock hot spot are spot-on, with house-cured meats and locally raised produce matched with fresh herbs and a really neat crust. Try the Humble Pie – a simple affair with ever-changing ingredients based on what’s seasonal. 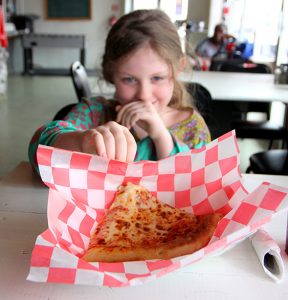 Hunter Robinson with a slice of cheese pizza at Southbound in Helena-West Helena. 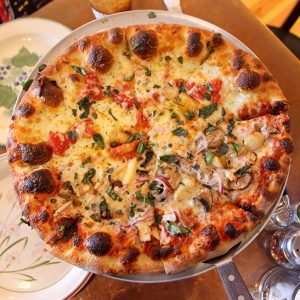 Half margherita half triple mushroom pizza at SQZBX in Hot Springs.

SQZBX
236 Ouachita Avenue
Hot Springs, AR 71901
501.609.0609 | sqzbx.com
Cold-fermenting gives this slightly-thicker-than-thin crust a particular flavor that matches well with the restaurant’s love of mushrooms in all their glory and differentiation. Great pies are served in a comfortable accordion-and-grand-piano decorated hall with a dogleg bar across the back. Check for beer specials. 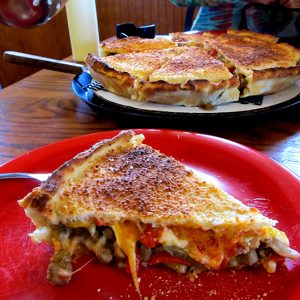 Uncle Roman at Steffey’s in Lavaca.

Steffey’s Pizza
627 West Main Street
Lavaca, AR 72941
479.674.2300 | steffeyspizza.com
The Pennsylvania-native Steffey family relocated to the Lavaca community southeast of Fort Smith decades ago; their native state’s varieties of cornmeal-dusted pies bear golden crusts and a simple sauce. The pie of most renown, the Uncle Roman, is baked in a cast-iron skillet for 25 minutes to ensure the best cooking of the contents of this inches-thick pie. 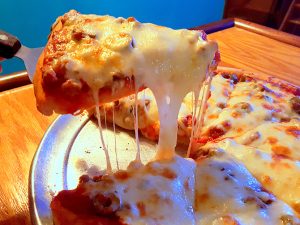 Beef and zucchini at Tommy’s A Famous Pizzeria in Mountain View.

Tommy’s Famous A Pizzeria
Arkansas Highway 66
Mountain View, AR 72560
870.269.3278 | TommysFamous.com
The much-missed Tommy Miller brought together a Chicago sauce and a Detroit crust under Ozark skies to create what may be the state’s most lauded pizza, a square crust, zingy bite some travel two to four hours to savor. Miller’s unusual choices of barbecue pork, walnuts and zucchini remain on the menu. 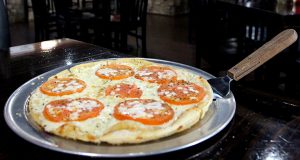 Upper Crust
3120 Shelby Drive #2
Jonesboro, AR 72404
870.336.7500
Also 1810 East Highland Drive
Jonesboro, AR 72401
870.933.1990 | UCPizzaCo.com
Arkansas State University’s go-to college pizza joint offers thin-crust pies worth sharing at each of its two locations, offering just about anything you might want. Feel like honey roasted turkey? Got that. How about dill pickles? Sure. From hickory smoked pork to Rotel tomatoes, no one bats an eye. Just don’t ask for thick crust – you won’t find it here.

Vino’s Brewpub
923 West 7th Street
Little Rock, AR 72201
501.375.8466 | VinosBrewpub.com
Decades of pizza lovers have split this longtime beer joint’s huge, flat pizzas, in particular a Margherita with loads and loads of basil embedded in cheese. The housemade selection of beer comes back to what pairs best with the pies and calzones that still come from the original paddle-fed ovens in the open kitchen. Order at the counter. 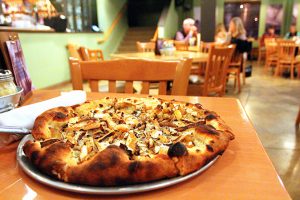 The Curly at Wood Stone Craft Pizza in Fayetteville.

Za Za Fine Salad + Wood-Oven Pizza Company
5600 Kavanaugh Boulevard
Little Rock, AR 72207 | 501.661.9292
Also 1050 Ellis Avenue
Conway, AR 72032
501.336.9292 | ZaZaPizzaAndSalad.com
It’s been just over ten years since the Yellow Rockets Concept opened its doors in the former Heights Theater, and it has yet to disappoint. High-heat Napoli-style pizzas, an ever-changing seasonal menu of toppings and the perfect pairing with salad and gelato make for delectable dining; people-watching from the high balcony of the second level is an extra bonus.

Sometimes, the bottom line must come into play when you’re considering a family meal. While there are lots of places you can get good pizza, and many places where you can get cheap pizza, few joints cover both of those tasty ideas well. These three, though are ahead of the curve. 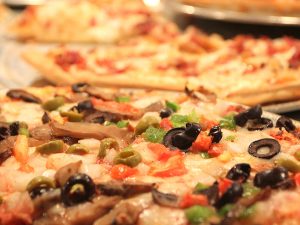 A supreme pizza at Cavanaugh Pizza in Fort Smith.

Cavanaugh Pizza
3111 Cavanaugh Road
Fort Smith, AR 72908
479.646.2996 | CavanaughPizza.net
Feed a family of five on a $20 bill? Yes, you can, especially when you head to Cavanaugh Pizza, where the two-for-one specials carry special weight. Cavanaugh’s classic thin crust topped with 70’s style combinations of supreme, Hawaiian, meat lover’s and a really fantastic veggie mix are all winners – doubly so for the joint’s taco pizza. The request-friendly pizza buffet is a must-do as well, particularly for Bavarian pizza. 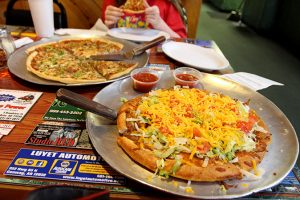 Same Ole Joe’s
44 South Broadview Street
Greenbrier, AR 72058
501.679.3911 | SameOleJoesPizza.com
Generous amounts of topping on a somewhat but not too thin crust keep bringing the locals back to the humble goodness of Same Ole Joe’s. The lunch buffet is excellent and always a good deal – as are the pies made to order. The Mexican with its layer of refried beans is about as wild as you’ll get here, but that’s all right: Same Ole Joe’s relishes in its position as the Greenbrier community’s go-to family-style pizza joint.

Pizza Den
513 Nourthwest Texas Street
Hoxie, AR 72433
870.886.7752
This longtime family-run restaurant in its unusual H-shaped stone building offers a not-too-thick, not-too-thin Midwestern style dough topped with the combinations you remember from childhood, served in a pizza parlor comfort that will bring back memories. Save room for the cookie dough pizza dessert. 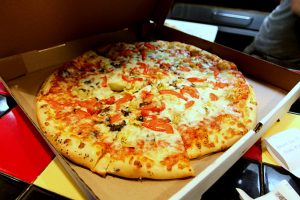 Damgoode Pies
DamgoodePies.com
Whether it’s the thick, chewy crust or a stuffy, the pies at Damgoode are meant to sustain. Add in a Venn diagram of sauces (I’ll take pink, please and thank you) and quality ingredients in ample portions, and you get a whole lot of comfort and joy to share. From the Underdog and its ground beef and bell peppers, to the Artie with its artichoke hearts, to the Shrimp Pesto and even the favored choice of The Hog and its four different ways to eat a pig, this pizza joint deserves its name. 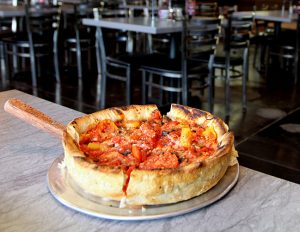 The Leif Erikson Chicago Style Pizza at Gusano’s in Springdale.

Gusano’s
www.gusanos.pizza
In a state that eschews Chicago deep dish, Gusano’s comes closest to answering the craving for sauce-on-the-top over-the-top high-edge deep-dish pizza, the star of a menu that throws all sorts of other Chicago eats – from Italian beef sandwiches to Chicago dogs – at you. A growing spread of Gusano’s means the craving you’ll develop may be satisfied across the state. 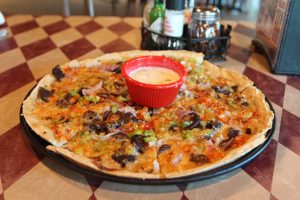 U.S. Pizza Company
USPizzaCo.net
The granddaddy of thin crust purveyors still offers the beloved Dave’s Favorite of chicken, spinach, Anaheim and jalapeno peppers, tomatoes and yellow squash on a creamy Alfredo. But you need to expand your horizons and give Owen’s Philly Cheesesteak a shot – with its roasted beef, onions, sweet bell peppers and crushed red pepper. Dip your slice in the cheese dip that comes along for the ride for a surprisingly strong flavor of cheesesteak and happiness.