Arkansas’ Rising Country Music Stars: Made For This

Some people just have “the look.” When you meet them, there’s an instant recognition, and it’s immediately clear who they are, what they do and what they’re about. When you meet Erin Enderlin, there’s no doubt about who she is — this woman was born to be a country music star.

It’s not just her standard outfit of a western shirt with embroidery, blue jeans and cowboy boots that gives her away. She has an indefinable presence and a quiet confidence — almost a low-key swagger — that recalls old-school country musicians like Johnny Cash, Loretta Lynn or Waylon Jennings. Like these legends, Enderlin gives you the feeling that she has carried her guitar and songs out on the road to sing in dives and listened to the pulse of small-town America and come back to write about what she’s found.

Enderlin has been steadily building a reputation for herself as a skilled wordsmith, both for herself and other artists, in addition to her considerable talents as a performer — whether it’s on stage or in the studio. Now, this Arkansas-bred, Nashville-based artist is getting ready to break out.

Meeting up in a Little Rock coffee shop, Enderlin says she’s been on the country music track almost since birth. She got hooked on the genre by listening to her grandfather’s record collection, full of Conway Twitty, Statler Brothers and Kenny Rogers and by watching the “Grand Ole Opry” on television. The music appealed to her from an early age because of its storytelling possibilities and its ability to reckon with hard issues that she saw around her.

“One of the best things about country music was that it was adult music,” she says. “It was real music that dealt with hard issues of life so that people going through those things don’t feel so alone.”

It wasn’t long before she was taking music lessons, starting with piano at 5 and guitar at 13. But the big lesson for Enderlin was learning to write songs — this was the moment when her music began to take flight.

“And then when I was about 10, I started writing songs and taking them into my music class and playing them, which seems kind of weird thinking back about that… I don’t really know exactly what possessed me to do that, but I just enjoyed it, and I liked being able to put words together and tell [a] story.”

She started taking guitar lessons with Terry Holmes, who helped her develop her technical abilities as well as her songwriting chops. “I was writing songs, but he kind of helped me make a connection on being able to like the music and the lyrics and also just made me a lot more comfortable in doing it and thinking about it in a different way.”

Despite being a self-described introvert, Enderlin started performing at talent shows, coffee houses and other spots around central Arkansas. After graduating high school, she pulled up her roots and headed east to Middle Tennessee State University where she started soaking up the music industry. The journey to Tennessee forced her to realize how much she needed to learn. As the epicenter of country music, Nashville became a temple and training ground for her — a place where she could learn from the masters of the form and test the limits of her abilities.

“I worked really hard when I was in school,” she says. “I think it’s a blessing and a curse sometimes, but I think it’s definitely a blessing to have a passion for something and be steered so strongly in that direction so young. And I was just really hungry for it. I remember when my roommate was sleeping, I’d be in the stairwell in my dorm room writing songs. 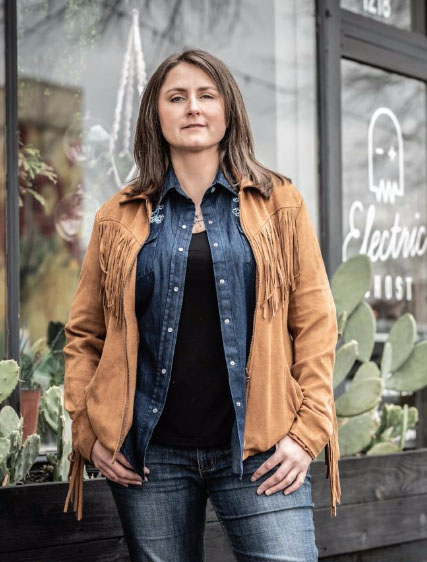 “I didn’t play anywhere for the first year that I was in Nashville because I went to a show at the Bluebird, right when I moved to town, and I immediately was like, ‘Oh, okay… I have some things to learn.’ And I just set a goal. I wanted to have written a hundred songs by the end of the first year because Harlan Howard, who’s a very famous country writer, said that you need to write a hundred songs to get those out of the way. And so I focused on that, and I focused on going out and seeing as many shows as I could.”

On spring break of her senior year in college, Enderlin’s life changed forever. She got the call that Alan Jackson was recording a song she had written. The road to that moment was circuitous, as most “happened-overnight” moments are. She had co-written the song “Monday Morning Church” with songwriter Brent Baxter and showed it to Reese Faw, who worked in artist development. Faw saw the potential in the song and introduced Enderlin to Jeff Carlton, who was working at Hamstein Music and went on to become Enderlin’s first publisher.

“He actually took money out of his own pocket and went and paid for me to do five recordings of five of my songs and started pitching them,” she says. One of those songs was “Monday Morning Church.” When Jackson released the song as a single, it shot up the Billboard charts, ending up at No. 5 on the U.S. Hot Country Songs and at No. 34 on the Country Songs list for 2005.

“I ended up getting a Randy Travis cut a couple months later and an artist development deal on RCA Records,” she says. “So I was insanely fortunate in that when I graduated, I got to go into writing full time. I’ve had other part-time jobs here and there… but I was able to really focus on that craft. It’s a gift to be able to focus on your craft. I don’t take for granted having that opportunity.”

While she didn’t cut an album with RCA, Enderlin continued writing songs for major country artists from Luke Bryan to Lee Ann Womack to Terri Clark to Reba McEntire. She landed her first big tour, fronting for Jamey Johnson (who would go on to produce her album) and Willie Nelson.

But like any good country song, there can’t be high times without the lows. Enderlin began to feel like an outlier in Nashville and unsure if there was a place at the table for her. She ended up in a hostess job at the Grand Ole Opry, wondering about her future in the music business. She was jolted back to the ground when fans recognized her while she was working at the Opry during George Jones’ funeral, telling her how much her music meant to them.

“I had a couple of years there that were really difficult… trying to figure out what I was doing and if I could still pursue this,” Enderlin says. “I felt for a little while that I was kind of out of place there and wondered if there was still a place in country music for what I do.”

Slowly, Enderlin began to build the steam that is powering her success — she started writing relentlessly and racking up gigs, including more than 100 in the past year. In 2017, she released her album “Whiskeytown Crier,” which received critical acclaim. A concept album, “Whiskeytown Crier” was inspired by an idea from Jamey Johnson, writing songs about a place called Whiskeytown and the inhabitants therin.

“I’m thinking we’ve got all these sad people, and what if they all lived in this town called Whiskeytown. And the album, it was like a newspaper but with songs, which is interesting to me in and of itself [because] it’s like meshing different senses together,” she says.

One of the singers featured on the album was someone that Enderlin has known since her early days in Nashville who has blown up in a big way since — Chris Stapleton. Back when she first met him, though, he was just a housemate, albeit a talented one. “Stapleton lived in the bachelor apartment and, at night I could hear him singing through the air conditioning vents and I was just like, ‘Someday, people are going to be really jealous of this.’”

This year, Enderlin has also played more shows and released a four-part EP series. The culmination, though, was her newest 14-track album “Faulkner County,” named after the county where she was raised.

What’s next for this bona-fide rising star? With so many accomplishments already, what does Erin Enderlin aim to do for her next act?