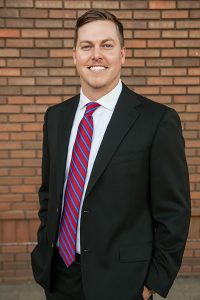 Lineus Medical is bringing medical innovation to Fayetteville with new IV technology.
The product, called SafeBreak, aims to make IV lines more secure. A majority of hospital patients receive an IV, but those IV lines fail 46 percent of the time, according to a study in the Journal of Infusion Nursing.
CEO Spencer Jones worked as a nurse for three years prior to founding Lineus Medical, and he was all too familiar with IV failure.
“The problem we’re solving is IV-line dislodgement,” Jones said. “Whenever I was a nurse, I went into a patient’s room after shift change, and they’d pulled out their IV in the middle of the night in their sleep, and no one knew. That problem, that lack of security, led to this idea.”

When an IV is dislodged by a force over 4.3 pounds, it is harmful to the IV catheter and can lead to infection, according to Lineus Medical’s website. SafeBreak fits between the catheter and pump and safely separates when the line is pulled by a force over 3.7 pounds, eliminating the possibility for infection or other complications due to rough IV dislodgement.
Jones developed the idea in 2015 at an accelerator in Memphis called ZeroTo510 Medical Device Accelerator. Upon further research, he realized that someone else had already patented the idea. With the help of a business partner, Jones bought the patent in April and started Lineus Medical the next month.
It has taken nearly three years to bring SafeBreak through the development and regulatory stages, including the battery of tests necessary to make sure any submission is ready to be tested by the FDA. The device is now on the final test and will be submitted to the FDA soon.
Lineus Medical is more than ready to sell SafeBreak once it is approved by the FDA. Jones and his team have already nailed down their distribution partners, the largest being MediCore in Nashville. From there, the device will be sold to hospitals across the nation.
In the meantime, Lineus Medical is also developing another medical device called the BVAD, a double-lumen IV catheter. This device would allow nurses to draw uncontaminated blood from the same IV that is pumping fluids into a patient. It means less pain for patients who would otherwise have a needle stuck in both arms. The BVAD would especially benefit diabetic patients who typically have blood drawn at least four times a day in the hospital in addition to their insulin IV drip, according to the American Diabetes Association.
The BVAD is still in the development stages, but they already have working prototypes. The device will hopefully come to market in 2019, Jones said.
Until then, Lineus Medical is just a three-man team, composed of CEO Jones, a chief operations officer and a director of engineering. While the team is small, Jones sees potential for big growth in Fayetteville.
“There’s a sense that the city and the people, whether the mayor’s office or different business leaders around the area … that they want to make sure we have every chance to succeed,” Jones said. “It really is a great area to start a business.”
Lineus Medical has received assistance from local startup supporter Startup Junkie, as well, to help point them towards success.
“We think it’s going to be a big year for us,” Jones said. “I’m excited to get this product on the market and start selling it.”