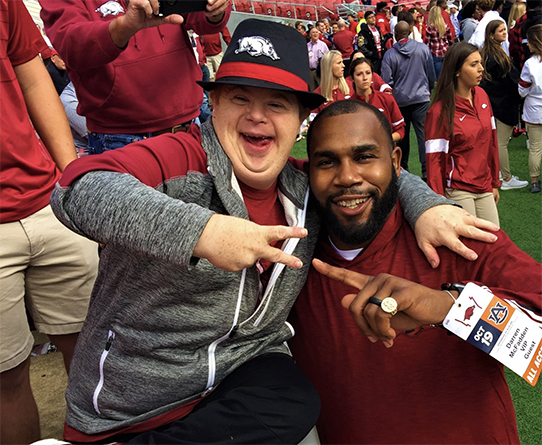 Leave it to Arkansas’ No. 1 fan to rally the troops when much of the fan base is in the depths of despair.

Canaan Sandy, an ESPN Hall of Famer, has taken it upon himself to “Fill the Hog Pen” for Arkansas’ homecoming game with Mississippi State Saturday. He is urging any fans that have tickets that are not using them to donate them so others will use them and make for a large crowd.

With Arkansas underachieving with a 2-6 record, morale is at an all-time low. Statewide sports talk radio and message boards have become more and more negative and there seems to be a bigger contingent of fans who want second-year Coach Chad Morris fired.

You won’t hear that from Sandy, though. Whoever the coach is, Sandy will defend him tooth and nail. He still keeps in touch with former Coach Bret Bielema, who especially enjoyed their encounters before games and at Razorback Club meetings.

Sandy’s ever-enthusiastic positivity is really what Hog fans need. A decision on Morris’ future won’t be made until the end of the season. Fans can’t control that decision. However, Arkansas still has four games left, including three in the state of Arkansas and fans can make a difference there.

Mississippi State is in the same boat as Arkansas. Its season has taken a negative turn, and Bulldogs second-year Coach Joe Moorhead is on the hot seat similar to Morris. Both teams are struggling and lacking confidence. It would stand to reason that a boisterous home crowd could fuel the home team and demoralize the visitor. Arkansas welcomes Conference USA foe Western Kentucky and former Arkansas quarterback Ty Storey. If Arkansas beats Mississippi State, its chances to beat WKU would go up. The attendance would probably increase also.

I know some of you will contend Arkansas won’t win either game. You may be right. I wouldn’t pick Arkansas to win any of the remaining games, including the season finale in Little Rock against Missouri. However, if they win one, I think that could translate to at least one more win. This team needs something good to happen. If it does Saturday, that could make a big difference in the approach for the final three games. Morris is calling for a “November to remember.” That is the right mantra.

If you don’t want to go, that’s fine. I can’t blame you, but there are plenty of people who do (Sandy has 300 people waiting for free tickets). Contact Sandy on social media, and you will be directed on where to drop tickets off to.

Sandy and his mom, Ginger, have put a lot of time into this effort. He loves his Hogs and the players. He is actually one of Arkansas’ best recruiting weapons as he visits recruits far and wide with the help of a new car that was donated to him by a Little Rock dealer.

This hasn’t been a good year for Hogs football, but Sandy is determined to make something positive out of it. I wouldn’t expect anything less from Arkansas’ No. 1 fan.