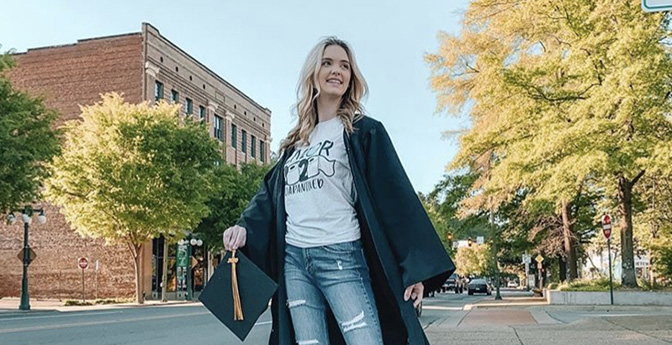 For most teenagers, the rapidly growing social networking app TikTok is a casual source of jokes, dance videos and cooking tutorials. However, for Arkansas native Paige Mackenzie, TikTok is the hopeful beginning to her career. And as she’s grown her TikTok platform to more than six million followers and her Instagram to more than 330 thousand, it looks like she is on the right track.

“My end goal for TikTok is my career,” Mackenzie told AY About You magazine. “Social media can take you to so many things – singing, acting, modeling. There are so many doors that can open up.”

TikTok is a video-sharing platform owned by ByteDance, a Chinese company that merged the early 2010s app Musical.ly into TikTok. The app is used to create short dance, lip-sync, comedy and talent videos, catching the eyes of mostly 18 to 24-year-olds. Over the past year, TikTok has grown exponentially as popular young creators such as Charli D’Amelio and Addison Rae have taken the social networking world by storm, garnering more than 56 million and 41 million followers respectively.

Mackenzie, a 17-year-old from Hot Springs, got her start even before TikTok was TikTok.

“I got [Musical.ly] when I was 14,” she said. “But I moved on, deleted it and forgot about it. I redownloaded it in 2018 and started posting little acting videos. Then one just went viral. I think it got 700 thousand likes. I went from nothing to something overnight. That was so crazy for me to think that people actually wanted to watch my stuff.” 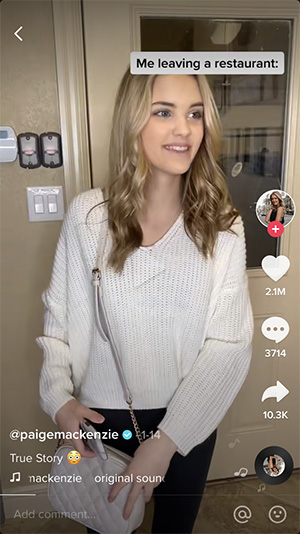 After that first viral video, Mackenzie continued to post content inspired by the things she saw trending on her “For You Page (FYP),” TikTok’s individualized collection of content that appears when users first log onto the app. Her process then transitioned into strategizing what would get her videos onto as many users’ FYP as possible.

For example, at the beginning, Mackenzie produced hair-flipping videos in slow motion, which was widely popular when she first started gaining traction on TikTok. This has evolved into her trademarks today: funny acting videos and videos featuring the clone effect, which gives the illusion of her multiplied in one shot. Of course, she does the occasional dancing video as well, as they are “definitely the most popular on the app.”

These branding efforts directly led to traffic on her page, which is what began her initial growth in followers. In January 2019, Mackenzie’s TikTok account (@paigemackenzie) began the rapid four-month growth from less than 100 followers to more than six million. Her Instagram followed suit.

“I don’t really know why people like my content so much,” Mackenzie said. “I try to put out clean content and not trashy stuff. My audience is typically eight to 15-year-olds, so I try not to put videos with vulgar words or anything like that. My account is kid-friendly.”

After establishing herself as a content creator, Mackenzie was introduced to the opportunities of making money through the app.

“TikTok doesn’t pay you for posting videos,” she said. “The way you make money is through brand deals. Some of mine include FabFitFun, Puma and Walmart. There are also things called ‘song promos,’ where musicians will ask me to use their songs in the hopes it will go viral on TikTok. I give them my rate, and then I use their song in my videos. That’s how people are making money.”

For long time creators such as Loren Gray, a young TikTok star who began her rise to fame when the app was still Musical.ly and who now sits at more than 43 million followers, the financial and business aspect of the social networking app has developed into a TikTok fortune. According to Seventeen, Gray earns an estimated $175,000 for each post she uploads onto the app, and the creator produces 3-5 pieces of content a day.

“I am really business savvy because of this,” Mackenzie said. “I like negotiating and working out brand deals. I definitely feel like this is something I have learned that other kids haven’t, just because of the path I’m on. I’m learning so much about business.” 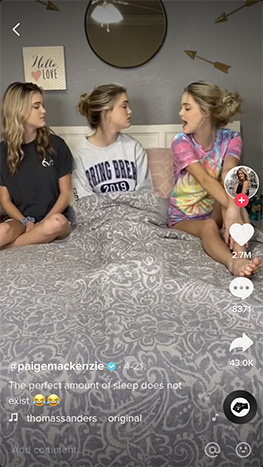 A screenshot of Paige’s TikTok video

A side effect of pursuing a career in TikTok and social media is awaiting the reaction of community and friends. For Mackenzie, she was raised homeschooled, collecting only a few friends in her town along the way. While her family supports her and even contributes to her content, Mackenzie admits that there were friendship casualties because of her fame.

“Because of TikTok, I’ve lost some friends,” she said. “People assume they shouldn’t reach out because I’m dedicated to this now, which is really tough.”

However, the fame is twofold. Many creators turn to fellow TikTok stars for new friendship, leaning on each other for community but also working together as business partners. Just this past year, 18-year-old TikTok star Lil Huddy and 21-year-old YouTube star Thomas Petrou gathered popular creators together and created the Hype House, a physical house located in Los Angeles that serves as a creative headquarters for members. Stars such as Avani Gregg, Alex Warren, Kouvr Annon and the Wright brothers have been members of the house. All members abide by strict guidelines, such as who is allowed into the house and how much content is required to be created each day.

“This whole house is designed for productivity,” Thomas Petrou told TheNew York Times. “If you want to party, there’s hundreds of houses that throw parties in L.A. every weekend. We don’t want that.”

While Mackenzie is not pursuing membership to the Hype House, she has created her own community of TikTok creators.

“My TikTok friends are my best friends,” Mackenzie said, adding that she had travelled to see them at the time of AY’s interview. “It’s so cool because we all are pursuing the same thing, so we click. We hang out together, we make videos together, we travel to L.A. together. I’ve even gone to Hawaii with them, where one of them shot a music video for their new song.”

As for Mackenzie’s future in the business, she sees TikTok as a temporary enabler. She recognizes that media platforms have an ebb-and-flow, and while it may be big now, it will not always be. However, TikTok is allowing her to get her start and pursue her passion for modeling in the near future. At the end of 2020, Mackenzie will be moving to Los Angeles to begin her modeling career.

“The hardest thing about leaving is moving away from my family and dogs,” Mackenzie said. “It is nerve wracking, but L.A. is where my friends and opportunities are. I’m just excited.”

READ MORE: Miss Arkansas Queens Hold onto Crowns as They Ride Out COVID-19