H. G. Wells once wrote, “Cycle tracks will abound in Utopia.” If this is so, bicycling enthusiasts will find joy in The Natural State. Below we share benefits and tips for riding and sources for information on Arkansas’ trails.

[dropcap]Bicycling[/dropcap] has long been the “red-headed stepchild” of fitness activities in the United States, lagging behind running/jogging in the number of people who list it as a sport they participate in on a regular basis. We’re nowhere near the Europeans when it comes to the number of our citizens getting around on two wheels instead of four, but we’re getting better.According to the Sierra Club’s 2012 fact sheet, “Pedaling to Prosperity,” between 2000 and 2010, the number of bicycle commuters in this country grew by 40 percent. In communities identified as “bicycle friendly” by the League of American Bicyclists, that number was even higher, at 77 percent. 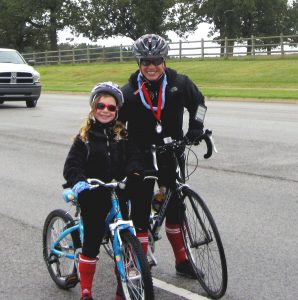 Christie Hancock and her daughter, Rylie.

While cycling for the average recreational bicyclist does not burn as many calories as running, it is still highly recommended for people who need to get more exercise but may have injuries or other concerns that make a gentler sport more advisable. Cycling offers a cardiovascular workout comparable to running, but is not as punishing to the knees and hip joints, making it a great choice for individuals who are adding exercise to their routine in later years. And, of course, it’s something the whole family can do together. Christie Duffy Hancock, of Fayetteville, Ark., has ridden with her family for many years, both with her kids and on longer rides with her husband. “It’s awesome to get away from the gadgets and screen time and just get out and enjoy nature with my tween,” Hancock said. “We have done many rides together — the longest was 25 miles.”

Many people are under the impression that cycling can be an expensive sport, pointing to high-end bicycles and accessories as a reason to avoid it. While it is true some brands can be prohibitively expensive, those brands are typically not the ones with which a beginning cyclist needs to concern himself.

For someone just starting to ride, a moderately priced bike from your local shop or sporting-goods store will get the job done without requiring an investment that will cause anguish later if doesn’t stick. It helps if you do a little research before you go shopping. Look online for some articles on cycling for beginners, compare prices, and, most importantly, look at bikes that are right for the kind of riding you want to do.

Before You Ride, Get Fit

Many new riders will experience pain and fatigue that doesn’t decrease with more riding, and, therefore, will quit riding altogether, thinking they are simply not good cyclists. Scheduling a professional bike fit can be compared to having a tailor alter a new suit. While it might look OK right off the rack, with a few nips and tucks, it will fit like it was custom-made.

A fit specialist can adjust your seat height and tilt, handlebars and a number of other small details about your bike. Many bike shops offer this service free of charge with your purchase, but if they don’t, it’s worth the minimal investment — $50 to $100 — to make sure you don’t start off on the wrong pedal, so to speak.

In Arkansas, we have ideal landscapes and terrain that put us in a perfect position to become a popular destination for people interested in a cycling vacation, and our parks and local government leaders have been hard at work to meet that goal.

The Arkansas Department of Parks and Tourism website lists 14 road trips in the state that feature beautiful vistas and unique historical sites. For those seeking adventure beyond the state lines, the Adventure Cycling Association is a good source for information on cycling vacations.

The most recent addition to the list of trail systems in Arkansas is the 36-mile Razorback Regional Greenway in Northwest Arkansas. Officially opened for cyclists on May 2 with a well-attended ribbon-cutting event in Springdale, the Greenway, which runs north and south from Fayetteville to Bella Vista, has already increased the number of cyclists in the region as people have taken to the sections that have been completed in stages over the past five-plus years. For more information, log on to nwatrails.org.

Wellness Wednesday: How to Cope with Change
June 9, 2021