Arkansas to Witness First Major Eclipse in Nearly a Century 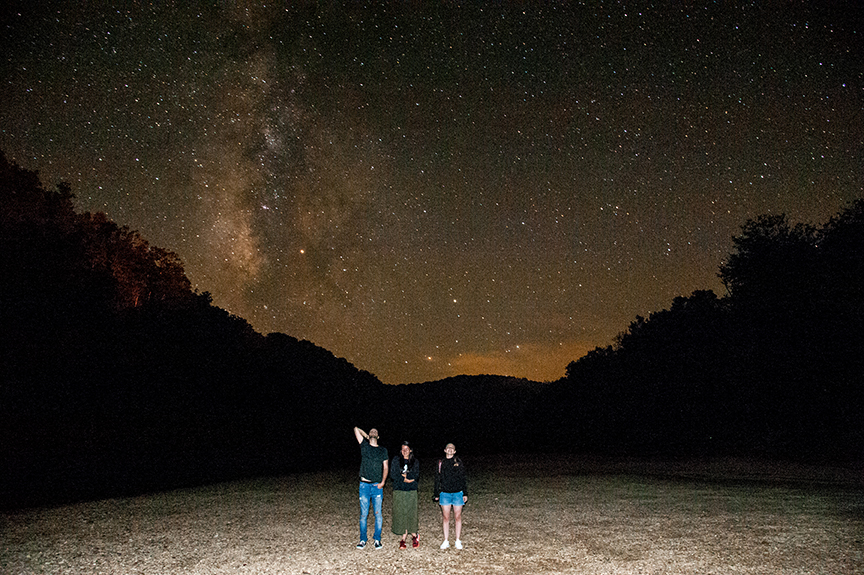 On Monday, August 21, a total solar eclipse will take place. For about three hours, the sun, moon and Earth will be aligned in such a way that the moon will pass between the sun and the Earth, temporarily blocking out some or all of the sun—depending on where you’re watching from. Arkansas is slightly south of the “path of totality,” but we’re far closer than many places. This is the first total eclipse visible to the continental United States in 38 years, and it’s been nearly a hundred years since one of this magnitude was visible in Arkansas. The next total solar eclipse, in 2024, will cross Arkansas diagonally from the southwest corner to the northeast, placing a large swath of the state in the path of totality. This year’s eclipse offers a perfect opportunity for a dry run to see how you might enjoy the 2024 event in Arkansas.

No matter where you are in the state, you’ll be able to see the sun almost completely blocked by the moon—especially if you’re in the north and northeast, which lie closest to the path of totality and will see 95%-97% coverage. According to a chart from the Central Arkansas Astronomical Society, the eclipse will begin at approximately 11:43 a.m. in the northwest corner of the state and be over by approximately 2:50 p.m. in the southeast, with peak totality occurring between 1:13 and 1:22 p.m. The cities of Piggott and Corning, which lie closest to the path of totality, will see the fullest eclipse, at 97% totality; El Dorado and Lake Village will see 83% and 85%, respectively.

When viewing an eclipse, proper eye protection—in the form of specially designed eclipse glasses or #14 arc welder’s glass—is imperative. “Safety rules,” says Dr. Clay Sherrod of the Arkansas Sky Observatory on Petit Jean Mountain. “You should never look directly at the sun—there’s no difference in the radiation,” which can cause permanent eye damage, even though the sun will be between 89% and 97% covered in Arkansas. But being outside of the path of totality does not mean we’re in for a boring show. “That’s a lot of coverage,” says Sherrod. “You can start telling a difference early on. Shadows are different. Colors aren’t quite right. It’s almost an ‘alien-esque’ environment.” Carl Freyaldenhoven, a lifelong science teacher and member of the Central Arkansas Astronomical Society, agrees. “Your body will feel it,” says Freyaldenhoven, noting that the temperature will drop, winds can increase, and some people may just feel strange. “Mostly, it’s unreal,” he says. “People can’t come up with words for it.”

While the most enthusiastic eclipse-viewers will be traveling to nearby sites in the path of totality (Freyaldenhoven will be in St. Joesph, MO, which he estimates will see 120,000 visitors for the event; that state is expecting 3 million people), those staying in Arkansas have plenty of options to gather with others for the event. Watch parties are planned at state parks including Petit Jean, Lake Catherine, Mississippi River, Mount Magazine and others; the Arkansas-Oklahoma Astronomical Society will host a watch party at the Lake Fort Smith State Park marina; the Mid-America Science Museum, in Hot Springs, will present eclipse-themed educational programming and hands-on activities in the hours before and after the eclipse; and the Museum of Discovery, in Little Rock, will host an “eclipnic”—bring a sack lunch, learn about eclipse science, then watch with provided eclipse glasses.

Other ways to enjoy the eclipse:

Dr. Clay Sherrod and Carl Freyaldenhoven shared several ways you can safely enjoy the eclipse if you don’t have glasses—or even if you do.