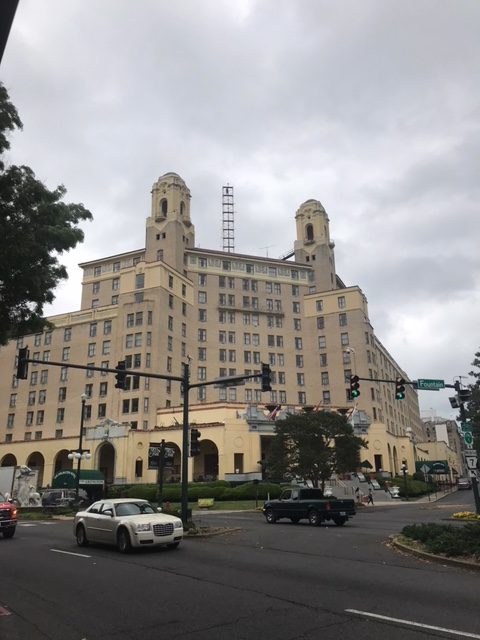 Hot Springs National Park – The twin towers of the Arlington Resort Hotel & Spa have missed the American flag flying from its mast at the north end of Central Avenue in the Spa City since the early 1970s. As a part of restoring the historic hotel and spa, owner Al Rajabi, CEO of Sky Capital Group and owner of the Arlington, directed his project team to renovate the flag pole located between the twin towers so Old Glory could once again fly from a most prominent place in downtown Hot Springs. According to Rajabi, “In restoring this Arkansas icon to its historic glory I felt that it was an important and significant first step to bring back the American Flag to oversee the progress on this project and to maintain its watch down Central Avenue!”
“The Arlington Resort Hotel and Spa is the flagship hotel for the entire State of Arkansas, so it is only fitting we celebrate her flag-raising after over 40 years as she re-emerges as the crown jewel she has been for almost 100 years in her present location,” stated Gary Troutman, President and CEO of the Greater Hot Springs Chamber of Commerce, “We congratulate and support Al Rajabi for his investment of both his time and money to restore her to her past glory and create new memories for Hot Springs and her guests for generations to come!”
The American Flag will be hoisted in a ceremony as part of the Greater Hot Springs Chamber’s Business After Hours being hosted by the Arlington Thursday afternoon, May 17, from 5 until 7 p.m. Popular columnist Rex Nelson will be the emcee of the ceremony that will feature remarks by Hot Springs Mayor Pat McCabe, Greater Hot Springs Chamber CEO Gary Troutman, and Arlington Resort Hotel & Spa General Manager Alan Sims. The band from the Arkansas School for Mathematics, Sciences, and the Arts will provide the National Anthem during the hoisting of Old Glory above the Arlington Resort Hotel & Spa in downtown Hot Springs.