J.P. Bell has turned his lens to capture the mundane, the powerful and the extraordinary … and this talented artist calls northwest Arkansas home. 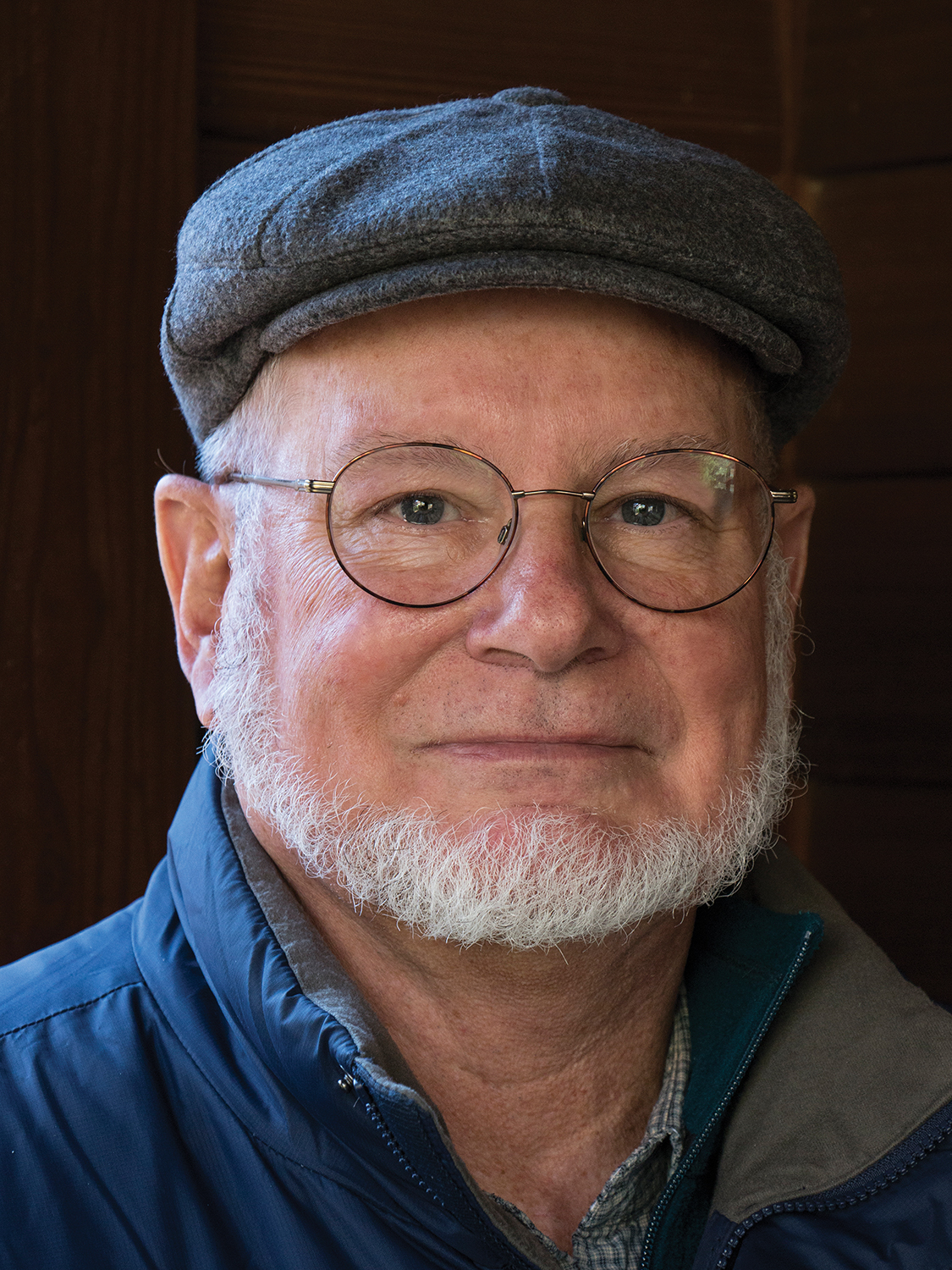 [dropcap]Sometimes[/dropcap] artists have a burning desire to create and share their passion and art with the world from a young age and pursue it relentlessly from their earliest years. For others, art begins as a hobby and takes on a life of its own after the artist quits his “day job.” James “J.P.” Bell, a retired emergency physician, tells a story that follows the latter, and his work is richer for it.

Bell attended the University of Arkansas at Fayetteville, working toward a degree in zoology. While there, he made himself at home in the darkroom in the Baptist Student Center where he lived and worked as a janitor. He processed film there for his research projects and almost decided to stick with zoology and continue in a research career, but his desire to help people won out over studying mice.

“I almost didn’t go to med school,” Bell said, “but I was interested in anthropology and how biology could help people, so I went ahead and applied.”

It’s obvious, as he relates his story from the small study in his home in Fayetteville, that he must have been excellent at his vocation in medicine; his demeanor is calm and friendly, and his gaze is observant. In fact, as we chatted, he noticed every time my gaze left him and was quick to ask if he could do anything to make me more comfortable. His are the eyes of a talented photographer. 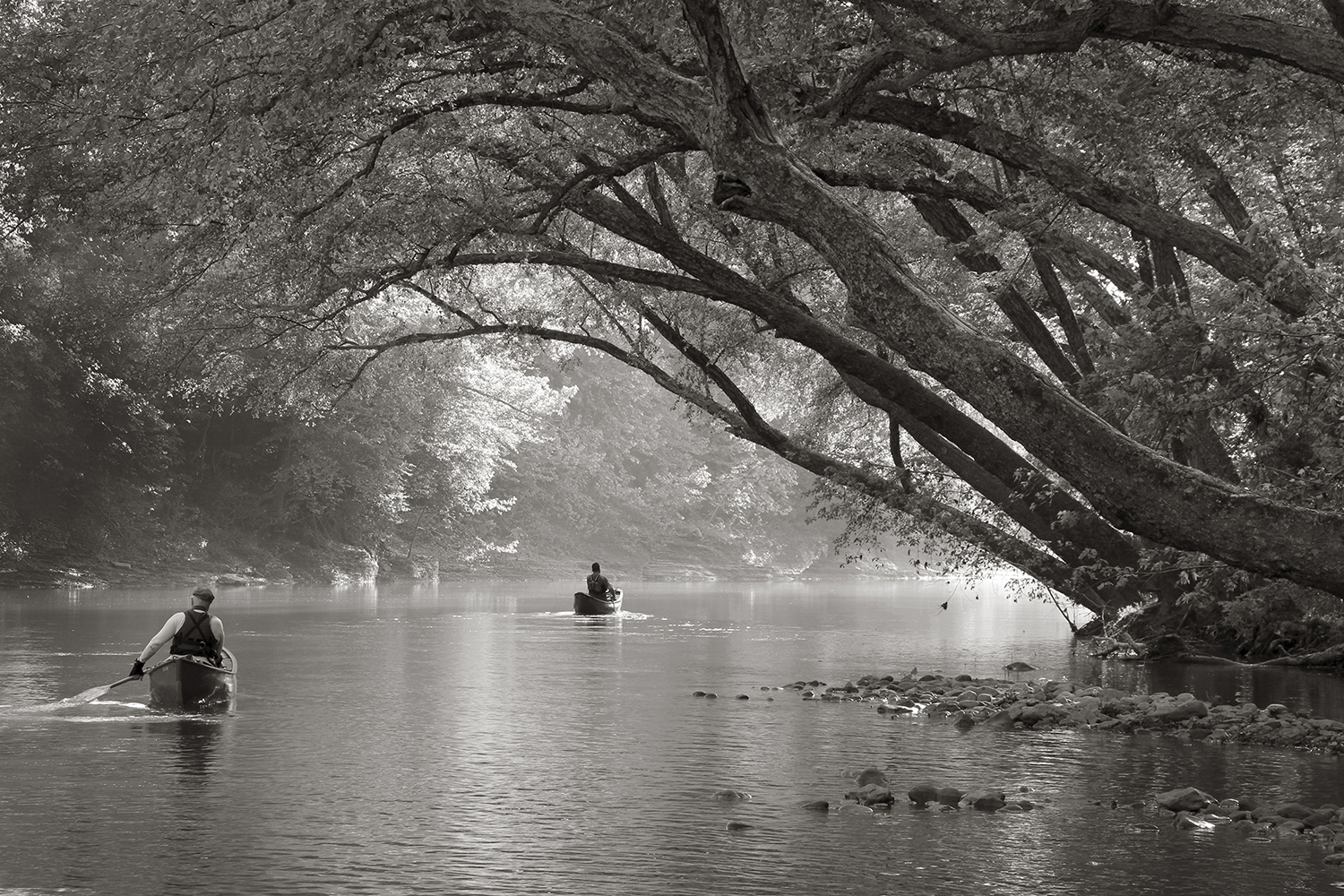 Two canoeists paddle into the late afternoon sunlight on the Mulberry River of Arkansas on 4 June 2011.

Bell used his first camera, a Kodak Brownie, to document his graduate work and canoe trips with friends, including two months in the Grand Canyon. But in 1973, he was able to take his work to the next level.

“My mother gave me a Yashika camera … and the next year I took it with me to Yemen.” He accepted a preceptorship, or a mentorship with a physician, for a three-month stint at one of the only sterile operating rooms in the country and spent time traveling both the region and Europe before returning home. He still sells photos he took during that trip through his website, a testament to their quality. “Those photos still hold up to this day,” Bell said.

After a couple of years spent in Montana working on The Blackfeet Reservation, Bell and his young family first moved to Little Rock for his medical residency, then on to Mena. He was still interested in photography, but mainly as a way to document his travels. During his time in central Arkansas, he worked in a darkroom again and created messes. “I set up a darkroom in a spare bathroom we had — I ruined a bathtub with chemicals,” Bell said, laughing. 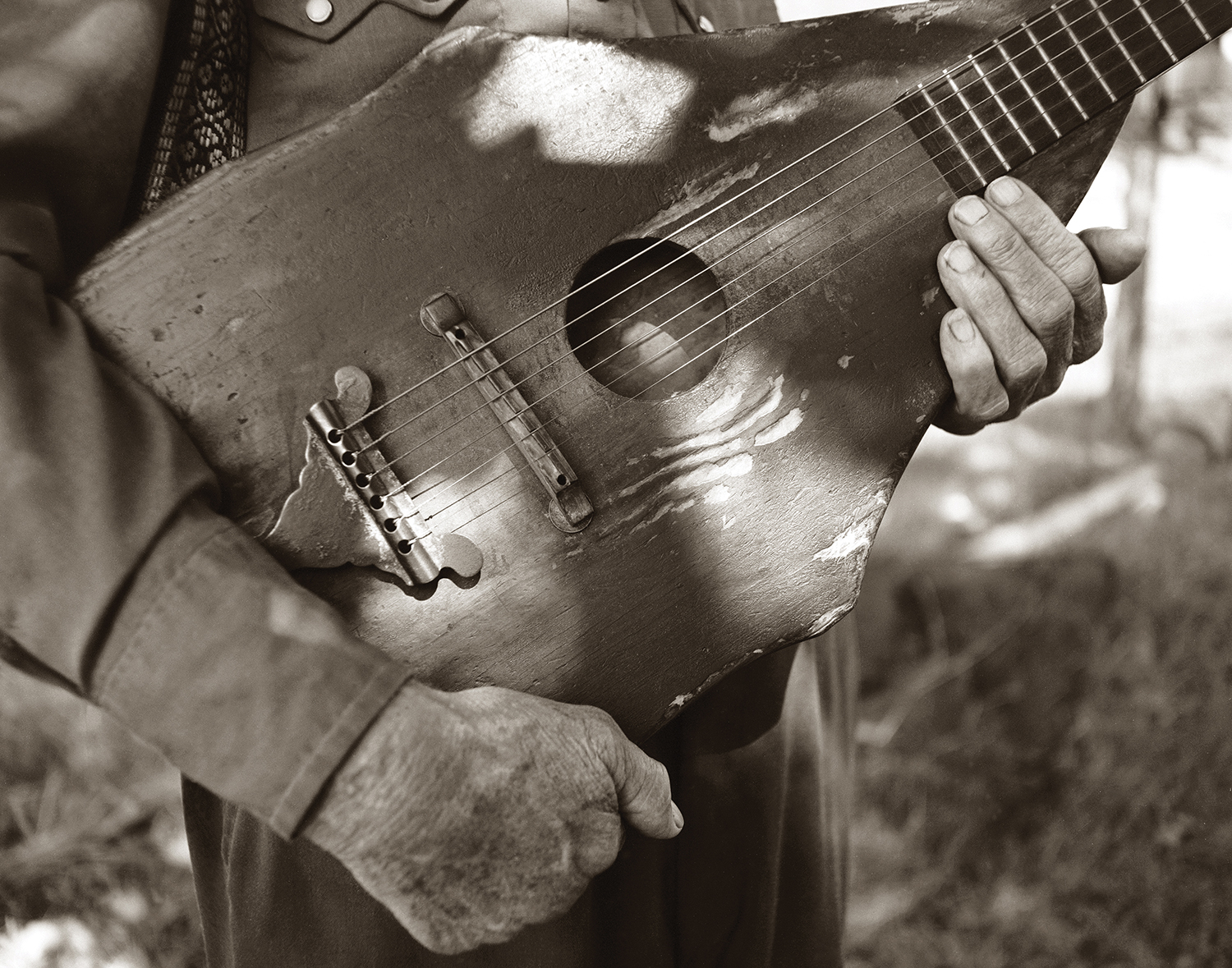 Ozark folksinger, Jimmy Driftwood, holds his 130 year old hand-made guitar passed down to him by his father. The late Jimmy Driftwood was at one time a high school teacher in the hills of Arkansas and wrote ballads to teach his students their lessons in history. His most famous song was “The Ballad of New Orleans.

An interest in trains and railroading — especially steam engines — led to several opportunities to travel around the country photographing the production of films involving steam trains. Through connections he’s made, Bell has photographed the making of a number of feature films and made-for-television movies, such as “Truman” in Missouri; “The Tuskegee Airmen” and “Biloxi Blues” in Arkansas; “Appaloosa” in New Mexico; and the Coen brothers’ “True Grit” in Texas.

When Bell photographs film sets he does so as a member of the railroad crew, not the movie crew. Working on a movie set requires membership in unions, so he prefers to work on his own as a photojournalist instead. He explained his interest: “It was a chance to recreate landscape photographs from the past, that hadn’t been possible for a long time.” 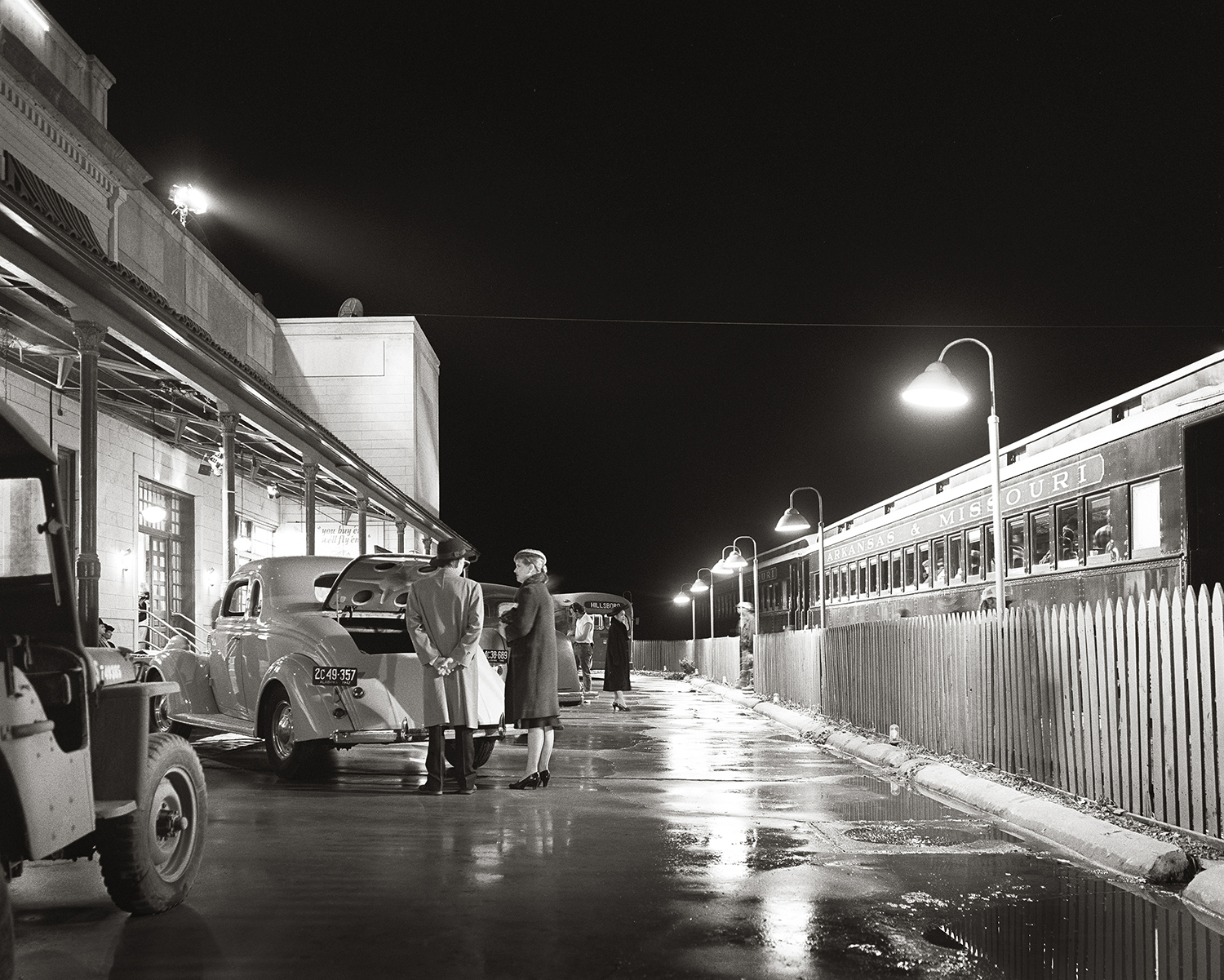 HBO pictures is filming railroad depot scenes at Fort Smith, Arkansas’ Frisco Station in 1995. The pavement has been watered to increase specular highlights as actors in vintage clothing use a train operated by the Arkansas and Missouri Railroad

After three years in Mena, Bell took a position in Fort Smith in emergency medicine, a move that allowed for a more traditional family schedule.

“[In Mena] I never saw [my wife] Candy and the kids.” It was during his time in Fort Smith that one of Bell’s most lucrative and enduring photography clients found him. 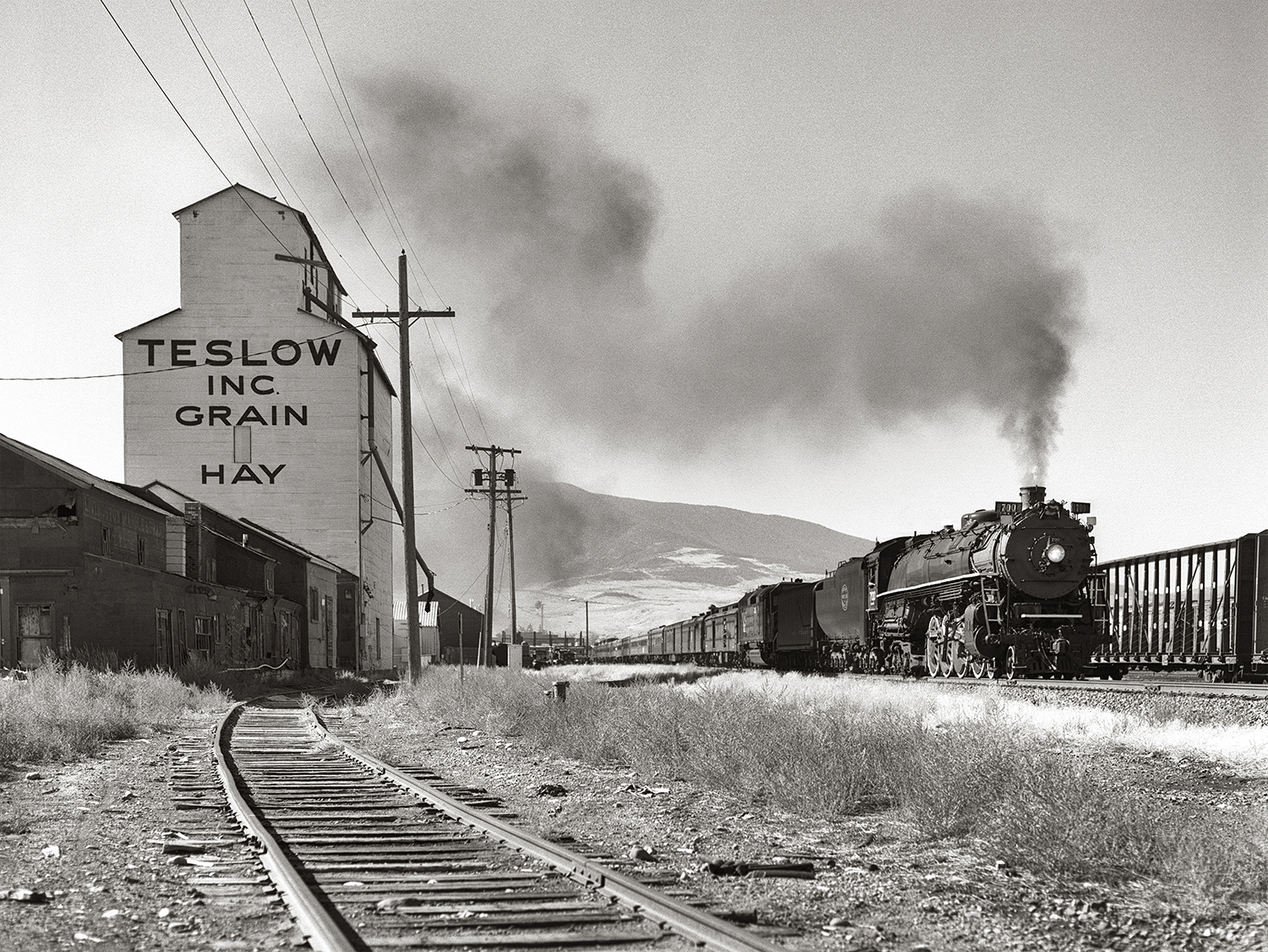 Not one to be left behind technologically, however, Bell has embraced digital photography and printing processes — he has not done any work in a darkroom for the last three years. He prints and packages orders in his small studio and enjoys knowing his work graces walls not only here in Arkansas but also all around the world. Digital photography has allowed him to reduce his costs and frees up time as well. But that doesn’t mean he’s resting on his laurels.

“Even though I have more time now, my interests have changed a bit, especially in regards to railroad history and writing,” Bell explained. “I hope my best images are still ahead of me.”

You can find Bell’s work at Art Form Custom Framing in Van Buren, at Cantrell Gallery in Little Rock and on his website at jpbellphotography.com.