Jonesboro, Ark., artist Brenda Wiseman, a nurse by trade, picked up a paintbrush and discovered another of her life’s passions. 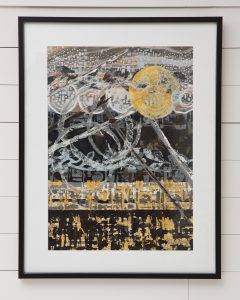 [dropcap]One[/dropcap]One of art’s most unique qualities is symbolism. Great meaning can be inferred and expressed through strong symbolic usage within artwork, and few know this better than Brenda Wiseman.

Wiseman said art has been a lifelong passion. “I started painting about 12 years ago. It’s something I’d always wanted to do, and I had an interest in other creative outlets,” she said. “Like most people, I was afraid I couldn’t paint, but I had a wonderful first teacher, Nanci Zimmer, who said, ‘If you knew how to speak French, would you take a French class? It’s my responsibility to teach you,’ and that sort of freed me to get over my fear of failure and just give in to art. It’s been a passion ever since.”

Symbols are especially important to Wiseman. “My favorite subjects to paint are probably symbols, but I’m most known for my birds,” she continued. “I love the symbology of birds. I also like geometric patterns and abstract trees. I love the abstract figure as well.”

When it comes to her personal creative process, Wiseman doesn’t follow a set series of rules or steps while crafting her paintings, but instead is often guided by new inspirations. “I think most often it’s either a new technique that I want to try, or a new color palette that inspires me,” she said. “But I try to have some idea of a theme or something I hope I can communicate through art. I think for me, art is an outlet and sort of, in some ways, represents life, and in other ways, it’s a wonderful way to lose myself. So I just start trying to come up with an idea that inspires me personally, and hope that it will communicate something to someone else.”

Portions of Wiseman’s work have been on display at the Sara Howell Gallery in Jonesboro for about five years now, and she displays at various shows around the country. 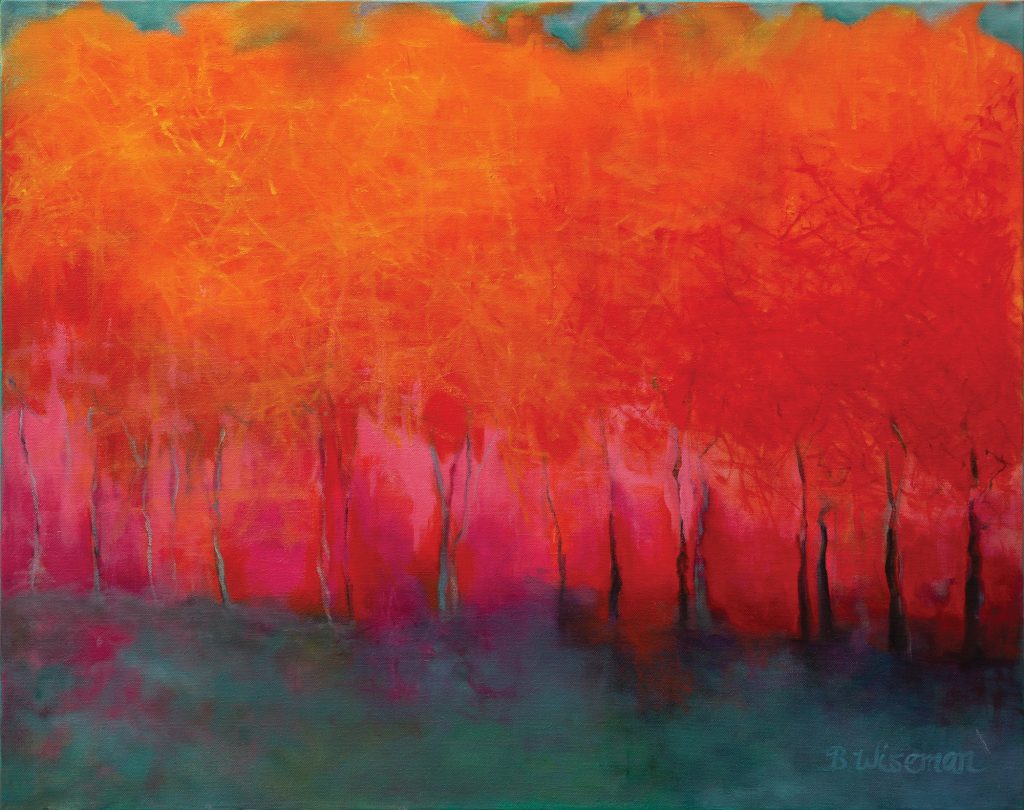 “I’ll be showing in Nicholasville, Ky., in the spring as part of an Italy-themed show, featuring all of the artists who painted at Caifiordi, an art school in Italy that recently closed,” Wiseman said. “I’ll also participate in Sara’s spring show. The number of shows I do varies, as I don’t paint for that purpose or really plan around it, but I do enjoy the camaraderie of group shows between artists.”

In addition to her paintings, Wiseman is also known for her work benefiting the Flo and Phil Jones Hospice at St. Bernards in Jonesboro. She has contributed artwork, facilitated retreats and even created a free book of inspirational art pieces for cancer patients titled Gifts of Grace and Gratitude.

“My professional background is working as a mental health nurse in oncology and hospice, and I think a lot of what comes out in my artwork maybe comes through those experiences,” she explained. “So I do a lot of art and things for St. Jude [Children’s Research Hospital], hospice, NEA Baptist Clinic and Wings Cancer Foundation. It seems like a lot of my artwork speaks to those venues.”

She explained how Gifts of Grace and Gratitude came into being.

“When I was working both at Wings Cancer Center in Memphis, [Tenn.,] and NEA Hope Circle in Jonesboro, we provided materials that would inspire people going through cancer treatments, and we found that many of our favorites were copied over and over,” she said. “We kept thinking it would be really nice if we could provide a little gift booklet that people could be given, free of charge, while going through treatment. In the process of exploring that, Rebecca Simmons, a woman whose husband, Ralph, had died 10 years before of cancer, was looking for a way to honor the 10-year anniversary of his death and what his life meant. She felt this project was exactly what she was looking for. 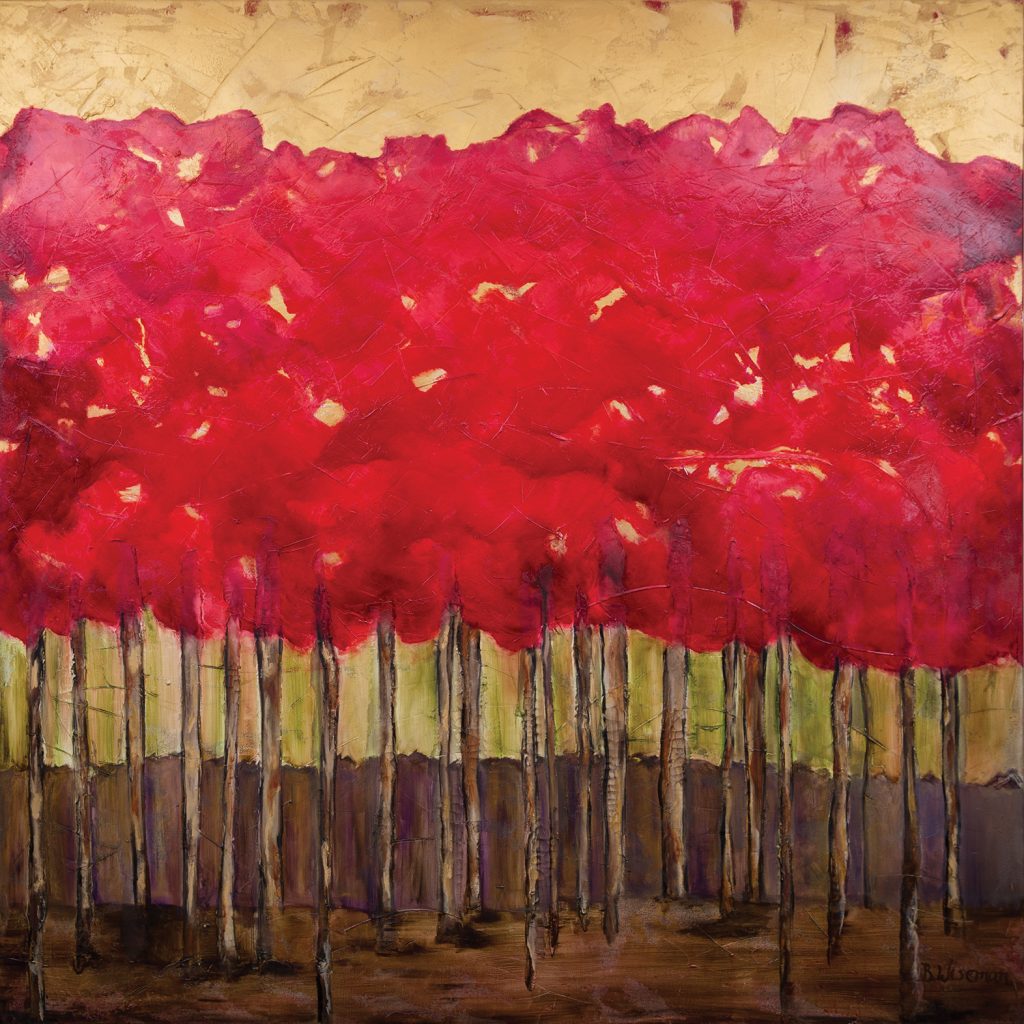 “So, with a grant from the Simmons family, we were able to compile a lot of our favorite writings, along with artwork … these books have been gifted to people at a lot of different hospices and oncology clinics, and there’s still a few available,” she said. “We’re getting toward the end of the run, but we have been able to provide those to a lot of people because of that grant.”

Wiseman offered encouragement to those interested in artistic expression but who may not have had the courage to take it up yet.

“It’s never too late to reinvent yourself and to find something that you’re passionate about,” she said. “I was very passionate about my work and felt very privileged to do the work that I’ve done [as a nurse]. I also have found a new chapter in my life, one that is highly influenced by my work, and it’s given me a new passion. I wish everybody would look for passions in their own lives. I think that’s an important thing to do and to know that you can just keep reinventing and trying new things.”