Art Scene: Love and the Leap

Local notable art-duo Patrick Matthews and Tracee Gentry-Matthews are leaving a mark on the world, one painting at a time.

[dropcap]The[/dropcap] husband and wife team are featured in art galleries in Arkansas, New Mexico, Colorado and South Carolina. Art connected the pair eight years ago, and they have been inseparable since meeting at an art conference at the William J. Clinton Presidential Library in Little Rock, Arkansas. They will open Matthews Fine Art Gallery together this fall, in the heart of Little Rock, at 909 North St.

The gallery will serve as a studio for both artists, and they will sell their paintings and prints, along with works by a knife artist, jewelry artist, a glass artist and a sculptor.

“We will feature James Hayes Art Glass — he makes beautiful glass bowls, vases and sculptures,” Gentry-Matthews said. “His work can be viewed at hayesartglass.com.”

Wind sculptures handcrafted by Mark White of Santa Fe, New Mexico, will be displayed this fall. The garden sculptures can withstand winds up to 100 miles per hour, yet move with ease during a light breeze. The wind sculptures are whimsical additions to any backyard or patio. 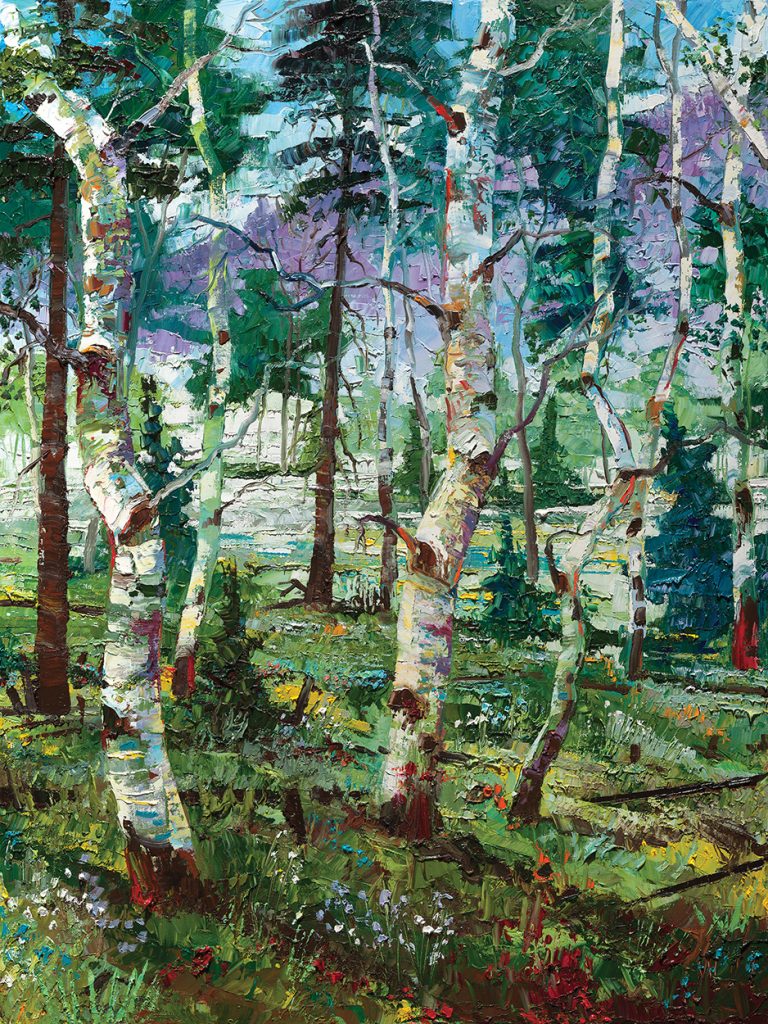 “We are very lucky to have the opportunity to feature Mark and his work. He is an artist whose work is very hard to replicate,” Matthews said. “The wind sculptures are just mesmerizing. They look great in gardens and on back decks. It will be so cool to see these pop up across Little Rock. His collection can be viewed at markwhitefineart.com.”

The couple is excited to offer the gallery as a rentable space later this year, as it is equipped with a full kitchen, bedroom and a full bath. They hope to rent the space for dinner parties, small receptions and various events. 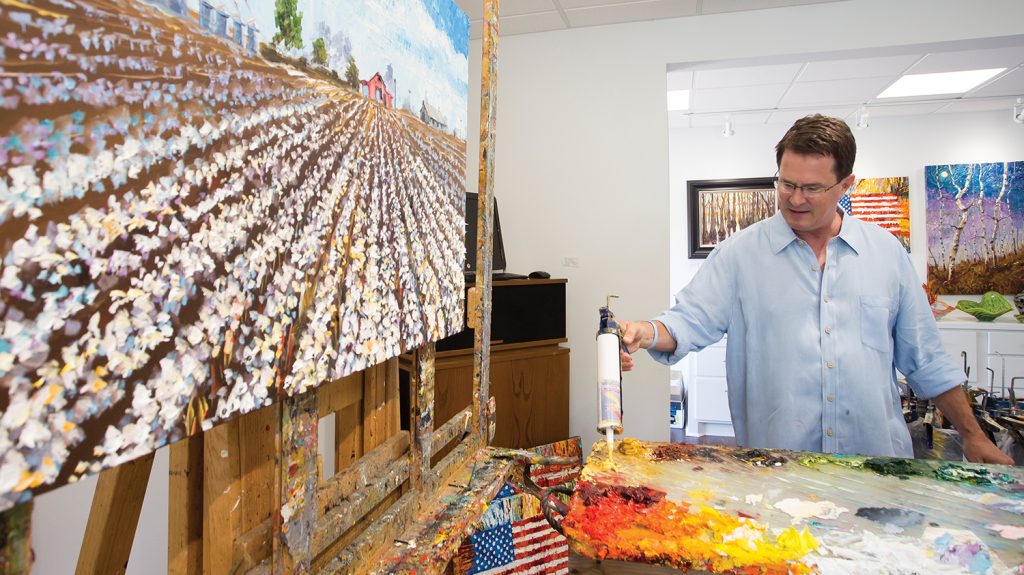 Matthews Fine Art Gallery will serve as studio space for both artists. Matthews is working on commissioned pieces.

Gentry-Matthews knew that she wanted to be an artist at a young age. In second grade, she was assigned a book report. Although not a requirement, she decided to draw a cover page for her report, and it was at that moment she became aware of her talent. Even after earning a bachelor’s degree in interior design from the University of Central Arkansas, she continued to be drawn to the idea of being a full-time artist.

“I took a leap of faith and began painting full-time 16 years ago,” Gentry-Matthews said. “In 2000, I had my daughter, Griffyn, and although many odds were against me, I knew this is what God was telling me I should do. I was a single mom, and I would paint while Griffyn slept. I believed in my heart and soul that if I worked hard, God would bless me, and He has.”

Matthews has a similar story that led him to his career as an artist. He received an architecture degree from the University of Arizona and moved back to Arkansas to begin his career. As a full-time successful architect, he said he felt something was missing. 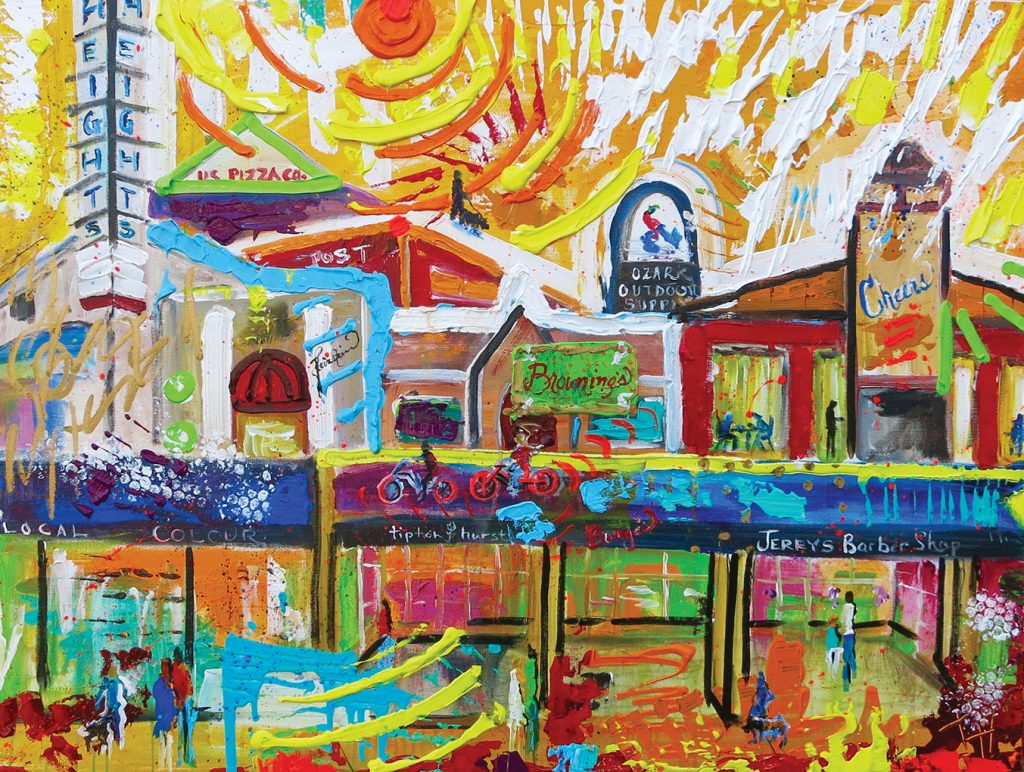 “Excitement in the Heights,” 36″x48,” acrylic on canvas by Tracee Gentry-Matthews

“I could draw really well, and I thought that architecture was a solid career path that I should pursue,” Matthews said. “I came back to Arkansas and was working as an architect, when I saw a painting in a gallery window. I was taken aback by it. I tracked down the artist, and we ended up becoming friends. I ended up trading him architecture plans for painting lessons.”

After progressing his painting skills, Matthews found himself overwhelmed and frustrated while working full-time as an architect, yet yearning to paint full-time. He contacted a life coach for advice on how to make this long-desired transition.

“I was actively painting but thought I needed to continue architecture in order to stay afloat financially. The life coach said that I could do anything that I wanted to do — I just had to take the leap. I had six architectural projects going at the time, and I called each client that night and asked to discontinue my work. To my surprise, every single client gave me permission to quit with ease. From then on I began painting full-time and have been since 2001.” 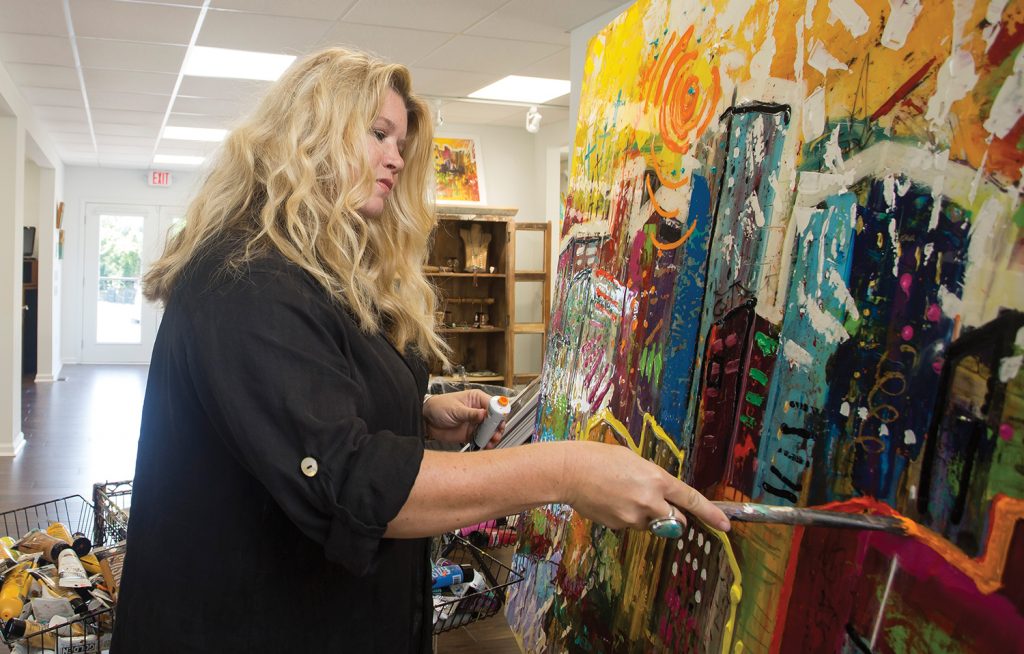 Matthews Fine Art Gallery will serve as studio space for both artists. Gentry-Matthews is working on commissioned pieces.

Gentry-Matthews specializes in painting vibrant, heavily textured, colorful cityscapes, Santa Claus, wine and crosses. Matthews is known for painting the American flag and Aspen groves. He is also licensed to paint the Univerity of Arkansas Razorback.

Each has his own style, and both believe it is important for every artist to create a unique style that can be viewed throughout his work. Gentry-Matthews incorporates her faith into every piece of work she creates, whether it is discreet or easily identifiable varies.

“Every painting I have ever done has had a cross somewhere in it,” Gentry-Matthews said. “Sometimes I have clients who ask me to paint over the cross, and I don’t mind doing that, but in my heart and soul I know it is still truly there.”

She enjoys customizing paintings upon request. Works can be customized to include wedding dates, family names, pet names and more.  Her work is featured in Gallery Central in Hot Springs and Cheers in the Heights in Little Rock. She is also featured in various personal collections and public galleries, including Arkansas Children’s Hospital, the Arkansas Governor’s Mansion, and Gold Strike Casino in Tunica, Mississippi. 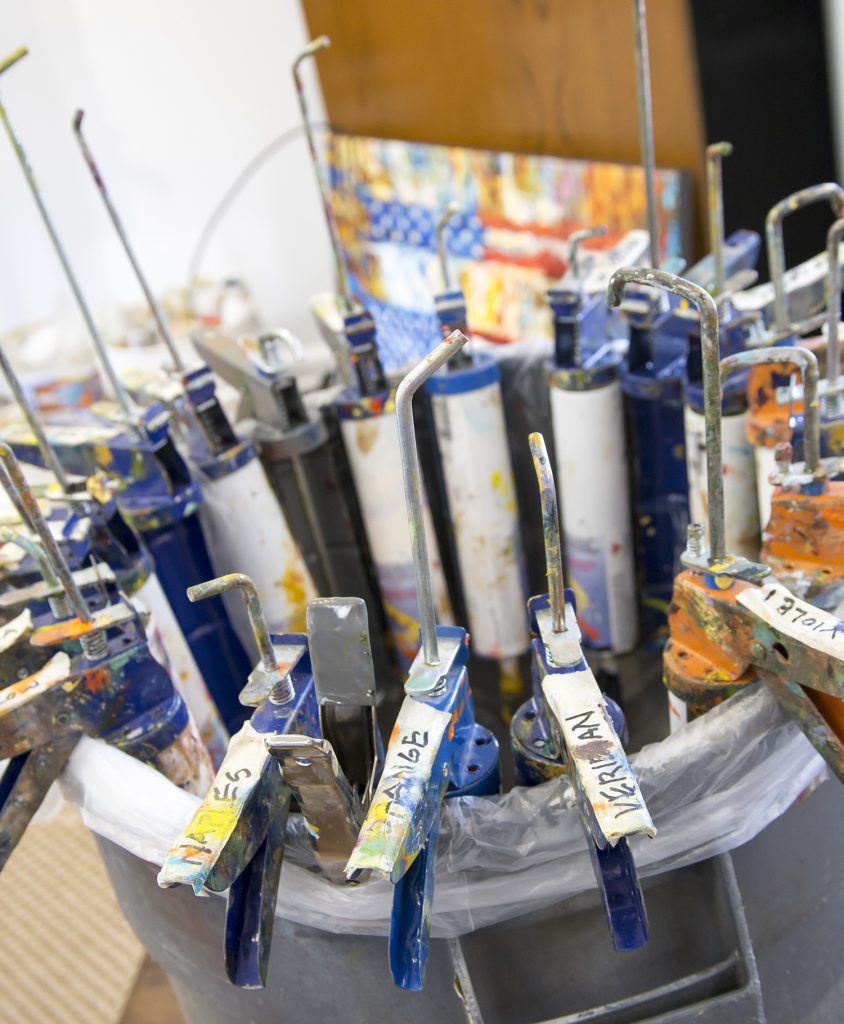 Matthews is featured in The Sportman’s Gallery & Paderewski Fine Art, which has locations in Beaver Creek, Colorado, and Charleston, South Carolina; and Local Colour Gallery in Little Rock.

They both have works in Waxlander Gallery in Santa Fe. The duo will add an additional gallery to their résumé when Matthews Fine Art Gallery kicks off with a grand opening this fall on Oct. 27.

The couple often mixes business and pleasure while traveling for painting excursions.  They recently traveled to Italy, where they painted together. Matthews plans to travel to Idaho before their gallery opens to paint and create an inventory for the gallery walls.

“We like to travel and paint live in front of the galleries we are featured in, then we leave the work with the gallery,” Gentry-Matthews said. “This year, we are working to create inventory for our gallery.”

The couple encourages other artists who strive to transition to full-time artists — Matthews occasionally teaches painting classes, and Gentry-Matthews serves as a motivational speaker to those striving to become entrepreneurial artists.

“My advice to anyone who wants to go full-time is to paint and to paint a lot, don’t just sit and talk about it — just go for it” Matthews said. “Create an inventory and a portfolio and then get in the car and find a gallery that will feature you. Just take the leap and believe.”