Ten days of arts appreciation is never a bad thing to celebrate, and the 2015 Arts and The Park Art Festival, planned for May 1 through 10 in Hot Springs, Ark., will prove it. The event will feature visiting artists, workshops, live theater and musical performances, studio tours, poetry readings and more.

[dropcap]The[/dropcap] Hot Springs Area Cultural Alliance (HSACA), the organization behind the 2015 Arts and The Park Art Festival, was formed only two years ago, but its members have wasted no time promoting the vibrant art scene for which the town is known.

Mary Neilson, special events manager for Visit Hot Springs and acting executive director of the HSACA, said they anticipate about 5,000 people will attend some or all of the festival’s full calendar of events. According to Neilson, there will be something for everyone: “From children to adults, fans of music, visual art, literary and culinary arts  — everything from ballet to ‘Tales from the South.’”

Some of Neilson’s favorite events on the schedule include:

The kickoff weekend, May 1 and 2, will feature tours of the creative spaces of artists living and working in the Hot Springs area.

May 6, a live taping of the award-winning public radio program, “Tales from the South”; at the Superior Bath House Brewery on Central Avenue; ticketed event.

May 7, Celebration of the Arts sponsor party; at the newly renovated Mid-America Science Museum. The event will include dinner and drinks, a live musical performance, visiting artists creating works, workshops and a dance floor; ticketed event.

May 8, a collaboration with Emergent Arts; a student art show in honor of area teachers of the arts and their students.

May 9, the annual Hot Springs Art Fest, a portion of the Arts and The Park Art Festival, will collaborate with Low Key Arts to provide music, art, food, drinks and activities for the whole family. Neilson said the Hot Springs community has been very responsive to the HSACA’s plans for the festival. “Everyone is excited to participate … arts organizations, individuals, galleries, artists … they are all coming together to celebrate the arts and culture of Hot Springs.

John Bramblitt is the special guest artist for the 2015 Arts and The Park Art Festival. Bramblitt, a painter from Denton, Texas, has become known for the colorful portraits he creates using visualization and his sense of touch. Bramblitt can’t rely on his vision to paint — he lost his sight in 2001.

According to his website, Bramblitt lost his eyesight as a result of seizures associated with his epilepsy and spent a year battling severe depression. He feared his plans to teach creative writing and his love for creating visual art would have to be abandoned in his newly sightless reality. But he eventually returned to drawing, then painting, using raised lines to help orient himself to his canvas. After trying several mediums to create the lines, including glue and fabric paint, he has settled on a formula he mixes himself using embossing paints.

In the 12 years since he first began to explore the idea of painting again, he has created a successful career for himself as an artist and teacher; is the subject of two, award-winning documentary shorts; has received three Presidential Service Awards; and has written a book about his experience, Shouting in the Dark.

Bramblitt said several well-known masters have influenced him. “When I was little, I was mostly influenced by Van Gogh, and I guess I still am. A lot of my childhood favorites were Impressionists. I appreciated the way they used color. I still love Van Gogh, Monet and Cezanne.

“When I was sighted, I sketched every day. Now that method is not possible, so I do a lot of thinking about what I want to paint,” he said. “I have a chair in my studio — [I call it] my ‘thinking chair’ — where I sit and focus on drawing. I paint the work in my mind before I ever start working on it. I have to work all the layers out in my mind before I start. I have also dreamed about painting.”

This process, Bramblitt said, has helped him improve. “My drawing skills have definitely improved over the years, and a lot of that has to do with my memory. I can also recognize people by the sound of their voice — even from across the room. But I am still terrible with names,” he said, laughing.

Unlike sighted artists, who may focus on one piece at a time, because Bramblitt uses touch to paint he works on several paintings at once.

“Usually, I work on three-to-five paintings at a time because I have to wait for paint to dry so I can go back and feel it before moving on to the next stage,” he said. “I started painting with oil, but now I almost exclusively paint with acrylics. It has sped up my painting time by a factor of 10 or so. I can also hit them with a heat gun to speed up the process.”

At one time, Bramblitt planned to teach creative writing, so it’s no surprise that he’s written a book. He has another in the works.

“I am working on a children’s story now. The story is done, now I am working on the illustrations. There were plans for Shouting in the Dark to be recorded as an audio book, and I am still hoping that will happen in the future,” he said.

Bramblitt will teach public workshops on May 7 and 8 during the Arts and The Park Art Festival. He is delighted to share his passion for creating art with attendees.

“The workshops are like the icing on the cake for me. I usually spend my days alone in my studio, so working with other people who are curious about art is just a blast,” Bramblitt said. “The cool thing is that everyone can paint together — no matter if you have never painted before or if you’ve painted all your life. Everyone is doing their own thing, and each person has a different way of doing it. One of the things I like best is that I haven’t done a workshop yet that I haven’t learned from. I come away from them a better artist.”

He added, “I like to do a blindfold workshop, teaching attendees the techniques I use when I paint, using touch and learning the feel of the materials. People wearing blindfolds don’t judge their work as much. We might do that a bit … some color exercises … I really am kind of loosey-goosey and just figure out what everyone wants to do at the time. Art is an expression of yourself and what you want to put out, so I try to let the students lead.” 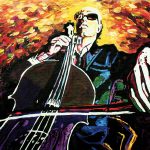 For a full listing of the events on the schedule for the 2015 Arts and The Park Art Festival, log on to hotspringsarts.org.