“We are the first brewery in a U.S. National Park and the world’s first to utilize the thermal spring water as our main ingredient. We turn out 144-degree water into a myriad of styles ranging from light to dark, mild to strong.” 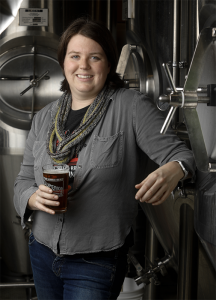 Rose Schweikhart moved to Hot Springs in 2011 with an impossibly big dream – to commercially brew beer using the city’s famous 144-degree spring water. She re-imagined the Superior Bathhouse, built in 1916 and vacant for 30 years, as a brewery, tasting room, full-service restaurant and event venue. After an arduous two-year negotiation with the federal government to lease the historic former bathhouse in the heart of Hot Springs National Park, she started construction in late spring 2013. Today, Superior Bathhouse is the only brewery in a U.S. National Park and the only brewery in the world to utilize thermal spring water in crafting their beer.

How did the project come about?

When I learned I was moving to Hot Springs in 2011, I wondered why there were not yet any breweries using the famous hot water. A quick inquiry to the park led to a tour of the Superior Bathhouse. Eight years later and mountains of paperwork later, here we are!

What is it like to be a female brewer?

Being a female brewer and owner in such a male dominated field is interesting because many people assume that beer (and business ownership) are guy things. Women love craft beer too, and the industry is changing rapidly to reflect that.

How is the beer brewed with thermal water unique?

We are the only brewery in the world to utilize thermal spring water because unlike most hot spring water in the world, ours is potable, very hot and contains suitable mineral content for use in beer.

What are your future plans?

Our future plans are to expand our sour, wild beer, and barrel aging programs by building out a dedicated facility for those styles. Also, I hope to break ground on our long planned beer garden by the time Oktoberfest 2019 rolls around.

What are some of Arkansas’s trends for craft beer?

We are so lucky right now to be in Arkansas because we are getting a ton of new breweries seemingly every day. I think the big trend is individuality. Of the more than 30 breweries in the state, every single one of them has its own style and its own story from huge production operations to tiny farmhouse breweries and everything in between.

Made in Arkansas: Denette Woodworks
February 5, 2021