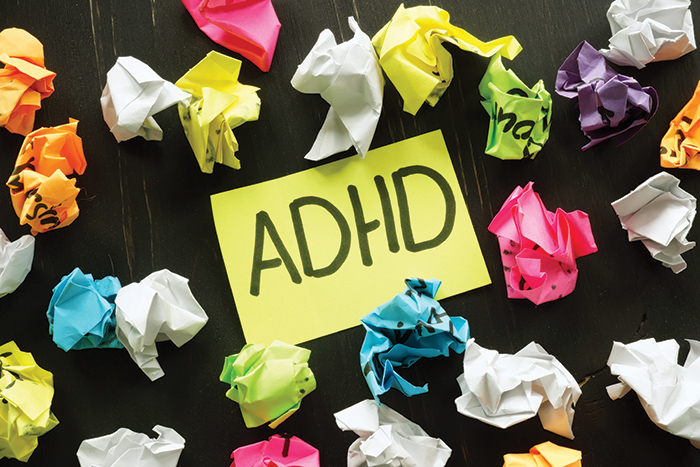 A Q&A with Dr. Josh Lyon of All for Kids Pediatric Clinic

We don’t necessarily know what causes ADHD for a lot of our kids. There isn’t something we can link to and say, “This is the neurotransmitter,” or, “This is where the real deficit is inside your brain.” There are some interesting MRI studies where we can see certain parts of the brain light up for our kids with ADHD versus kiddos who haven’t been diagnosed with it, but we haven’t really pinpointed the thing yet. We know there are some things that put you at risk for ADHD, like being a very low birth weight infant, prematurity, prenatal alcohol exposure, lead exposure and tobacco exposure. Boys are 2.5 times more likely than girls to have ADHD, but other than that, there’s not necessarily that one thing we look at and say, “This is our root cause for ADHD.”

How do we know if a child has ADHD?

The biggest thing is looking for those signs of inattention, hyperactivity or impulsivity — or sometimes all three. We can make a diagnosis from age 4 even up to age 18 when we see these symptoms, and we see the child is inconsistent developmentally. If you’re ever going to make that diagnosis, you’re really going to have to look at a child compared to peers and say, “Where are they supposed to be for their developmental level? Are they able to do what their friends are doing? Are they able to do those things they want to do?” We don’t only look to see if they are doing things that are inconsistent developmentally; we see if these things are having an impact on them. If they’re running around the yard, and mom says they’re doing OK in school, and she can handle things at home, there’s no impairment at school or socially or academically, or if older kids aren’t having trouble holding down jobs, then we don’t really make that diagnosis.” 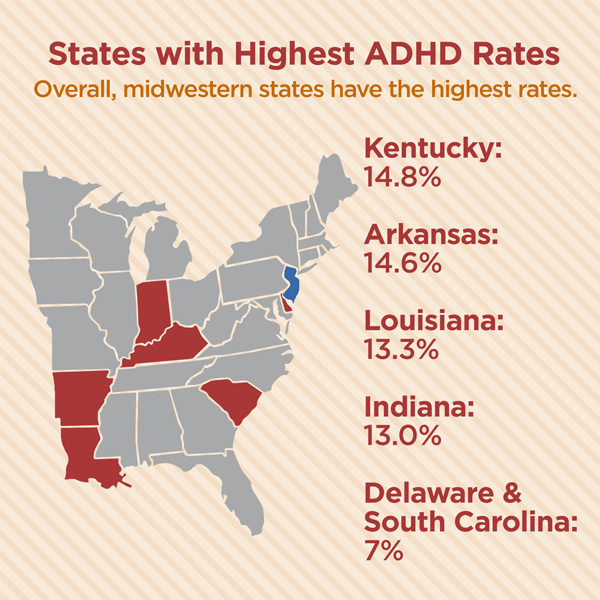 Genetics could play a part. Somewhere between 60 percent and 70 percent of ADHD cases can be familial. If you have a parent with ADHD, that’s a strong factor. Siblings of kids diagnosed with ADHD are about five times more likely to also be diagnosed with ADHD.

What is the first step to getting a diagnosis?

Talking to your pediatrician about those concerns is the first step. We’ll do a lot of screening for these kiddos. The most common thing you’ll see is the Vanderbilt [Assessment Scales] we send out. We really like to see our kids in more than one setting. We’ll have parents report on what they’re seeing at home, around peers, around siblings and with friends. Then, we’ll give parents a form to take to school. We’ll hear from teachers on how kids are doing academically when they’re in a more structured setting. We gather all this data together, and then the pediatrician can spend time with parents having a conversation about ADHD versus some of the other things that can mimic ADHD very closely.

One of the big things you’ll see is we don’t have enough mental health providers. Not only in our state but in our nation right now, period, to send all these kids out to psychiatrists. So we’ve had a big push to train pediatricians as well to manage ADHD cases, and I think we’re doing a really good job. There are some more severe cases that we might send out to psychiatry, but our pediatricians are very well equipped to be dealing with this. 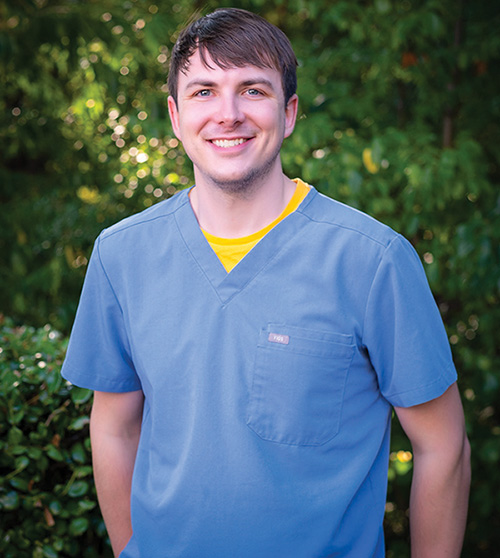 What about medicine? Parents are hesitant; there’s a lot of fear involved. Fear of what other people will think, or, ‘Will my child get addicted?’ ‘Will they be on medicine forever?’ What can you say about medication, and how do you feel about prescribing medicine?

Medication has been shown to be so effective in kids. Of all the things we use across the field of medicine, there are very few things that have shown to be as effective as stimulant medications, and some of our second-line, non-stimulant medications in treating ADHD. There are very few things that are as effective as these medications. I think parents get concerned with, “Can we get addicted to it?” and things like that. And we really don’t see that with kids. What we see … is kids are getting bigger, aging, getting hormones and growing. A majority of kids will be able to come off of those meds into adulthood. But there are many who will need to continue it into adulthood. But that’s not necessarily because we are addicted to it. It’s because ADHD doesn’t necessarily always go away. … And parents need to learn how to deal with it; adults need to learn how to deal with it and learn coping strategies. I suggest a counseling period to learn how to focus and redirect, when we’re losing that focus, to learn how to deal with this.

Parents never want their kids to not be their kids anymore. They are always afraid that we’re going to get on medication and our kids are going to be zombies, or they’re going to be hyper-focused, and they’re not going to be themselves. I think that’s a well-founded fear. But that should never be our goal. Our goal should always be to find something for these kids that lets them be themselves. Nothing is more frustrating for kids than wanting to focus on schoolwork and wanting to do things and not being able to do things that their friends are doing. So, finding medicines that help kids be themselves and do what they want to do is the most important thing in the world.

I have seen in my patients a change in their mental health. Like I said, it’s so hard for kids to not be able to focus. We get embarrassed in the classroom because we don’t know what the teacher just said, and we’re always having that response trying to figure things out. We get down on ourselves because we know we want to do it but we just can’t get there. It’s not their fault that they can’t get there sometimes. They just need that extra little step. And will see that nearly two-thirds of kids who have ADHD are going to have some other mental behavior disorder. They run so closely together. Whether that’s anxiety or depression or oppositional defiance disorder, and so much of that gets better when we can focus on that ADHD and allow kids to be themselves and do the things that they want to do, and really pick up their self-esteem a lot. 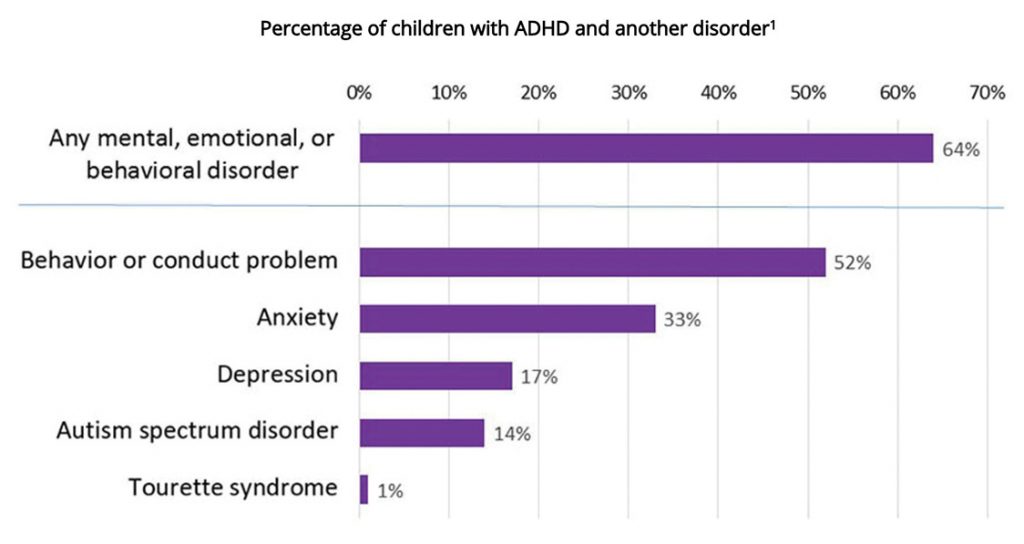 Centers for Disease Control and Prevention.

What about avoiding certain foods or certain diets?

Parent-child interaction therapies are fantastic — a lot of these cognitive-based therapies. Sometimes parents need to go and do these things with their kids and get their “black belt” in parenting. That can be super effective. But when we look at dyes and things like that — one of the most common ones is the Feingold diet, which is eliminating dyes, artificial flavorings and colorings — there’s very little good data on that. That said, it could be effective, but nowhere near the efficacy that we see with medications. You’ll see a lot of things pushed out there like micronutrients, zinc, B vitamins, which is really prohibitively expensive for many of our families, and there’s really no good data to say it is effective. Omega-3 fatty acid is the only thing that has been shown to [provide improvement] a little bit. But none of these things are near the efficacy of the medications that we can prescribe.

What words of wisdom can you offer for families with a child who has ADHD?

I think it’s really important to focus on what these kids do well, to be encouraging. So often, we get bogged down with why they can’t do this and they can’t do that and, “Why can’t you clean your room?” and, “Why can’t you do your homework?” and, “Why can’t you focus?” “We need to change the medication,” and that kind of thing. We lose sight of how smart and creative and funny and fun these kids are. So, really making sure that these parents are focusing on the good things about these kids, and encouraging them and [building] them up as we’re going through this. That is so, so important for the mental health of our kids as they grow. And it’s a reminder for parents that, “This is something we can work on — but at the end of the day you, have awesome kids.”