At the Corner’s Pyro Poutine is a Must Order 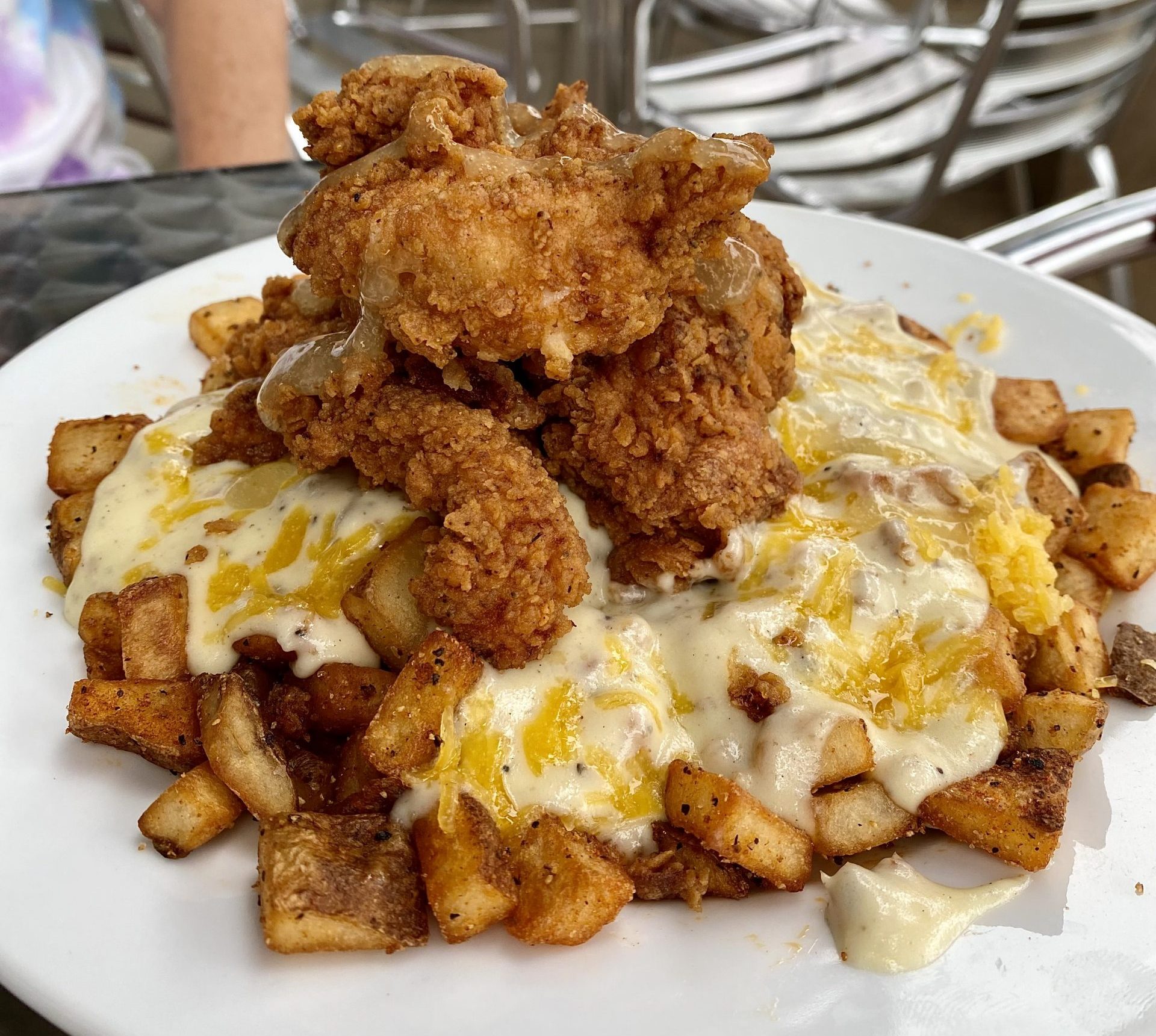 It is not that often that I’m inspired to dedicate an entire post on one dish, but At the Corner’s Pyro Poutine, a hearty offering comprised of home fries, cheddar, sausage gravy, house hot sauce and chicken tenders, is not your typical plate of food.

“The Pyro Poutine has been on the menu for about two years now,” says co-owner Helen Grace King. “We ran it as a weekend special on one of our themed menus, and people kept begging for us to bring it back. It’s our second poutine to put on our Classics menu, and it’s almost as popular as our original brunch poutine, which is more of a traditional Canadian poutine with brown gravy.”

I can definitely see why the Pyro Poutine is so popular. Scratch-made sausage gravy is certainly a plus, but so, too, are those home fries. Fried to a golden brown, the potato nuggets are as cute as they are delicious, with an irresistible crispness that holds up to a full-on gravy bath. I haven’t even mentioned the three chicken tenders residing at the top of the food pile. As of this writing, the poultry strips are currently my favorite of their kind that I have found in the area. That is not hyperbole. But what is the secret? King wouldn’t divulge too much, not that I could blame her.

“Lots of love and then some other things,” she says. “They are also local from Twin Rivers, which makes all the difference in the world.”

Per usual, there are no shortcuts taken at At the Corner. Attention to detail is everything at the restaurant, and that includes producing a house-made condiment like hot sauce.

“It’s a Lacto-fermented hot sauce using local hot peppers. It’s a month-long process that only produces small batches at a time. Every batch is unique and sometimes hotter than the previous,” King says.

This particular batch produced a subtle slow burn, providing a wonderful balance of flavors that helped elevate this breakfast/brunch dish to a must-order status. It was hot, but not overwhelmingly so, which I appreciated. However, one element that’s lacking for poutine purists is cheese curds. King has an answer (and it’s a good one) for you.

“We definitely have considered cheese curds, but we love the sharpness of the cheddar to pair with sausage gravy,” she says. “In Canada, there are many adaptations of the poutine, and this was our way of offering a more ‘Southern style’ poutine.”

I’m not going to argue with that sentiment, and neither should you. Instead, get yourself down to At the Corner and find out why I am raving about the Pryo Poutine. Given the sheer enormity and heavy nature of this dish, the $15 price tag is also an excellent value, especially given the quality ingredients being used. Maybe add on a cinnamon roll and a few coffees to your order and split this dish with a friend.

You both will leave full and happy.