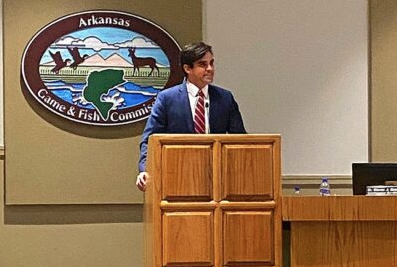 The Arkansas Game and Fish Commission has appointed Austin Booth as the 19th director of the organization.

Current director Pat Fitts announced his retirement effective June 30, 2021 at the end of the fiscal year November 2020. Through an extensive search of possible replacements and candidates, both in and outside the AGFC, Booth was chosen to serve as the next director.

Booth has served in the U.S. Marine Corps and has been the chief of staff and chief financial officer at the Arkansas Department of Veterans Affairs the past 18 months. He grew up in Arkansas where he cultivated a great respect for the outdoors and makes plans to continue conserving and promoting the Natural State.

“The love of the outdoors is simply who we are in Arkansas. What we have to show for it is a sense of grit, community, selflessness and perseverance that sets us apart from every other state. That is something that I want to fight for,” Booth said.

Booth and current acting director Fitts will work closely for the next month to help transition Booth into the role of director.