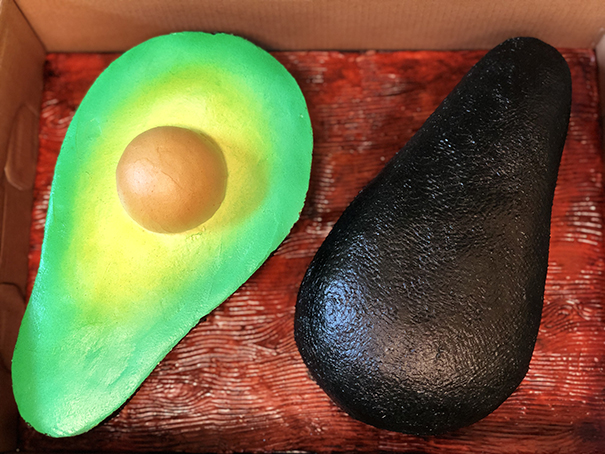 With less than a week to go to AY Publisher Heather Baker’s birthday, the “Heather and Lisa Eat Cake Because It’s Heather’s Birthday” contestis quickly coming to a close. But never fear, there are still more delicious cakes to be tasted.

It’s been a marathon for Baker and AY Editor-at-Large Lisa Fischer this month as they’ve been testing cakes from all over Arkansas. So far, the duo has tasted seven cakes – some from Little Rock and some from as far away as Monticello. “Can you believe we’ve eaten so much cake? Ya’ll, I am punch drunk in the afternoons,” Fischer says.

“We’re eating cake, and it’s almost my birthday, so we’re almost done with this. We have something that’s beyond spectacular. We’ve been eating cake, I’ve been thinking that we need tacos, but what’s better than tacos? An avocado – some guacamole! We saw this incredible cake, and we could not turn it down because it’s fascinating,” Baker says.

This cake isn’t just shaped like an avocado. It is hand-painted to look like a ripe green avocado with a center that it like a Hostess Sno Ball. It is split in two parts, with one side being a Cake mocha cake with cake liqueur with chocolate whipped cream icing, and other side being an Italian cream cake with whipped cream, pecans and coconut.

Immediately, both Baker and Fischer are won over by both sides of the cake. “This is so good. It’s moist, and the presentation is fantastic,” Baker says.

“That’s amazing,” Fischer says. “You don’t like coconut, though.”

For almost a month, both Baker and Fischer have gotten to explore the state’s bakeries and find hidden gems. It’s paid off for them with delicious cakes, but it’s had a positive ripple effect for the bakers, as well.

“We’ve had the best time with this contest because we love seeing what our contestants can do,” Fischer says. “We’ve already gotten business for these people with the cakes because people are fascinated that we’re doing this.”

That’s cake #8, so there’s only two remaining. Keep checking back to see the last two cakes and find out the winner.