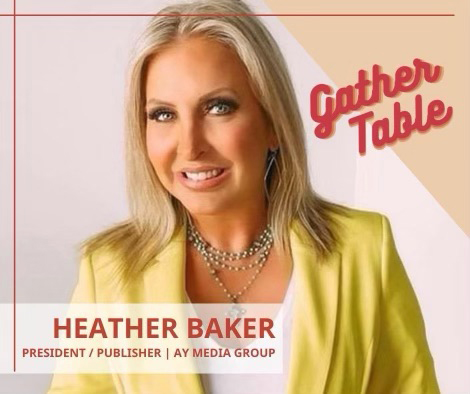 AY Media Group President and Publisher Heather Baker will be speaking during an upcoming Gather Table panel, hosted by Women Gather. This is the first Gather Table event that Women Gather has held.

Founded by Adora Curry, Amy Counce and Calli Turner, Women Gather is intended to serve as a safe environment for women of all backgrounds to form connections and learn from one another. Women Gather has developed three different programs to facilitate these connections: Gather Virtual, Gather Retreat and Gather Table.

The idea for Women Gather came during the turmoil of 2020, with racial and political tensions rife in the United States. According to Curry, the three founders wanted to create a “psychologically safe” space so that women could have authentic conversations, addressing hard subjects without shame. “The goal is for everybody to walk away, not only whole, but educated and equipped to do better and to encourage those of us who want to be better,” she said.

“We saw a need for women to come together because we think that women are the solution to a lot of global issues. When we put our minds together, we can bring peace but we can also empower each other to live our best lives, through communication, storytelling, mentoring, supporting one another and in recognizing that we all have a lot more in common than we have different but at the same time, embracing our differences in all of our perspectives.”

Since the founding of Women Gather, the group has held Gather Virtual, an online series every second and fourth Tuesday on the organization’s Facebook and Instagram pages. The first Gather Retreat and Gather Table have been scheduled to be announced.

Now, the plans for the first ever Gather Table have been unveiled. The Gather Table will focus on “Leading with Confidence” and will feature three individuals who embody the idea of women leading with confidence. The keynote speakers include Heather Baker; Dr. Jerrilyn Jones, assistant professor in the Department of Emergency Medicine at the University of Arkansas for Medical Sciences; and Lena Alik, a Syrian immigrant and teacher living in Arkansas.

“We took three women that we think are really powerful and that have very, very different stories of success and of leadership, and even of heartbreak and struggles that not only empower them to keep going but to develop their character,” Curry said.

Baker got her start in the publishing industry at a young age, selling radio advertising in college, before becoming a magazine publisher at the age of 22, starting Arkansas AutoBuyer. She went on to develop multiple publications at Arkansas Times, including Arkansas Wild and Savvy Kids. She also created the H. Baker Media publication Drive Arkansas.

In 2017, Baker joined Vowell Media Inc, which has since rebranded as AY Media Group, as publisher. She oversees the publication of AY About You Magazine, the largest lifestyle publication in Arkansas, as well as Arkansas Money & Politics, Mental Health Guide of Arkansas and other specialty publications. Baker became both publisher and president of AY Media Group in March 2021.

She has multiple media partnerships with KARK, FOX16 and 103.7 The Buzz.

Curry noted Baker is an individual that other women can learn from professionally and personally. “To watch her challenge the status quo and use her voice and not back down, and to see that go from where she first started to where she is now with AY, where I know people personally who are waiting at the newsstand when it comes out every month to get that magazine – that’s so inspiring,” she said.

Baker is also active in the local community with multiple organizations, including Project Zero, Second Chance Youth Ranch and Women’s Own Worth. She is also a board member of Junior Achievement of Arkansas and a member of Little Rock Executives’ Association (LREA), serving as the organization’s presidential leads chair.

Despite her steady ascent, Curry said that she admires Baker’s continued humility.

“She’s willing to teach anyone. She’s gracious, and those are the leaders you want,” she said. “She treats you like you matter and you have value.”

The first Gather Table event will be held Thursday, June 3, at 5:30. The event will include a happy hour, followed by a dinner for 30 individuals.

During the event, participants can have headshots with photographer Lucy Baehr. The headshot sessions will be $65.

Ticket registration for the Gather Table event begins Tuesday, May 4 at 9 a.m. Tickets are $50.