Back on the Menu 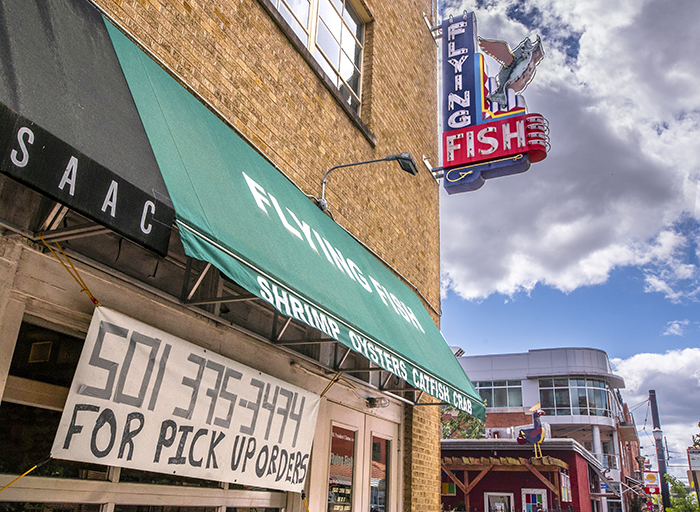 Katherine Eldridge sneaks away from the hustle and bustle of Doe’s Eat Place for a few moments of solitude. A restful sigh escapes her breath, shortly followed by a happier chuckle than she might have had for weeks. “We have about 15 different projects going on,” Eldridge exclaims. “I won’t be able to concentrate if I don’t get somewhere quiet.” 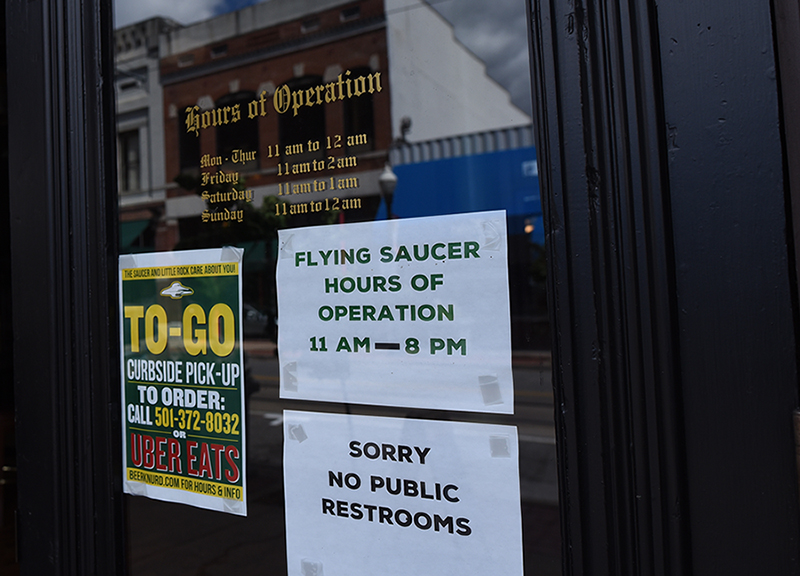 A few miles away, a distracted Rush Harding finds some time between mid-afternoon instructions and preparations for the soon-to-be dinner hour at Cache Restaurant. “We had a good night Wednesday night. We had a good night Saturday night,” Harding says. “We’re not doing anything great, but we’re doing numbers better than I thought we would.”

Their diverted attention from the conversation at hand is not taken impolitely — it’s heartening, considering the past few months. Both proprietors operate landmark eateries of the Little Rock food scene; each of which has been rocked by the COVID-19 pandemic.

“I’ve had zero revenue in two months,” Eldridge says, a hint of disbelief remaining in her tone. “Still had bills, but no cash flow.” 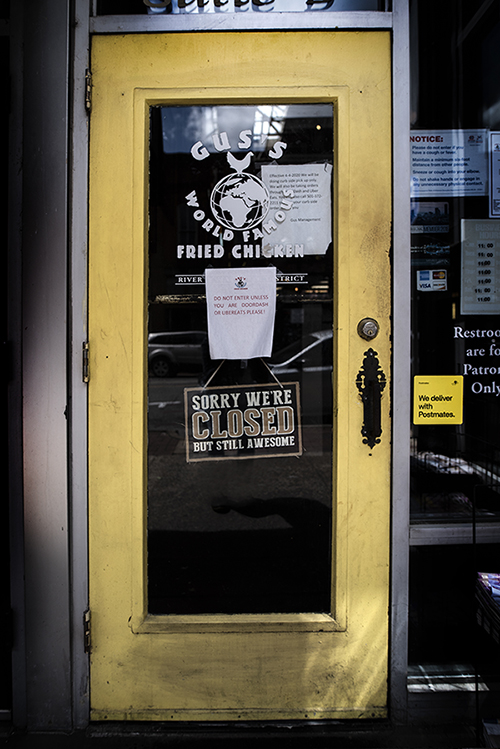 The Gus’s Fried Chicken location in downtown Little Rock restricted its service to curbside/delivery only — only allowing staff and delivery personnel in the restaurant.

For those who’ve worked in the industry, the song Closing Time by Semisonic has become synonymous with, well, closing — sweeping floors, filling salt shakers, stacking upside-down chairs on tables while the tune fills the air with the familiar melody. In this normal reality, tomorrow always comes. The seats find their resting places, with four legs planted firmly in the ground (unless they need a few sugar packets to hide that chronic wobble); the salt shakers and ketchup bottles get used by the next day’s patrons, and the cycle repeats. The few stragglers that remain at 10:59 p.m. get courteously reminded of the time by the jingle, “Closing time, one last call for alcohol so finish your whiskey or beer. Closing time, you don’t have to go home, but you can’t stay here.”

But when Gov. Asa Hutchinson directed all Arkansas restaurants to suspend dine-in operations on March 19, the oft-used jukebox favorite took on a much more somber timbre. After that night, chairs would remain on tables for almost two months.

Most business owners describe this time period in the same way: “unprecedented,” “never seen before.” That’s undisputed because there has assuredly never been anything like this. But unlike salons and other establishments that were forcibly shut down in a sweep, the plight of the restaurant industry during this era of coronavirus has been far from one size fits all. For some, no dine-in services meant adapting to curbside. Some additional staff training and the adoption of gloves and masks later, many found ways to thrive in such a climate. As our sister publication, Arkansas Money & Politics, reported in May, places like the David’s Burgers network of eateries grinned, beared it, and — after a few initial weeks of decline — began operating at or better than 100 percent of its normal revenue at all nine locations, on only drive-thru and curbside services. For others, to-go only might as well have been a stay-at-home order.

“We completely shut down on March 20,” Eldridge recalls. “We chose to do that instead of curbside because of our location and because of what we serve. We just felt like [steak] was not a good product to be taken to-go.”

This road she never thought she’d have to travel meant that her entire staff, some of whom had been employees of Doe’s for decades, would be furloughed for what turned out to be more than two months.

For Harding and Cache, the story was similar. 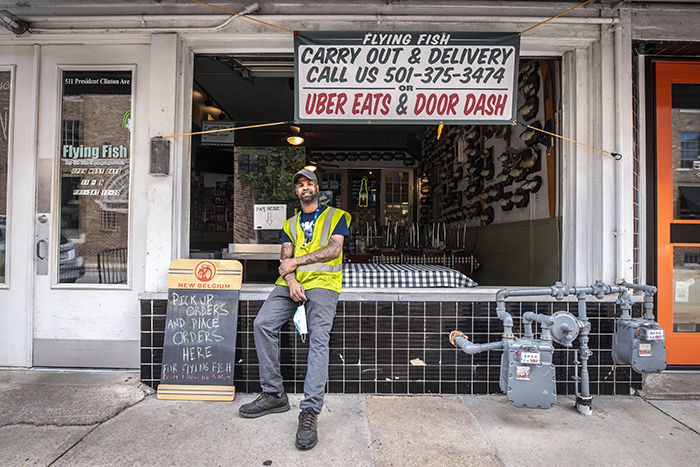 “Being downtown, it’s been difficult,” Harding shares. “I’m so happy for my friends who have been able to do that kind of business. But if you’re fine dining, it’s harder to do carry out, [and] downtown Little Rock has been a ghost town.”

Cache did not completely close down, however. During the interim, Harding was able to keep a portion of his staff employed to deliver lunches sporadically throughout the downtown area, which he says, “Wasn’t even enough to pay the electric bill. But, it kept some of our people busy. It kept us open, and we were able to take care of people.”

At that, Harding is pulled away again by another query from a staff member — a refreshing reminder that, at least to some degree, the rays are beginning to peek through the storm clouds and business is coming back.

There’s an age-old saying about the sun always rising tomorrow, no matter what happened today. It seems the past few months have, among other things, proved that to be a complicated comfort, at best. It took until May 11 for the state to rescind its restriction on dine-in eating, but even then it was a choice worth chewing over for most.

Despite the business she’d missed out on — a May usually filled with revenue from graduation parties and tourism travel, on top of the already healthy bottom line — Eldridge deliberated heavily the decision to reopen Doe’s to the limited capacity allowed by the governor’s directive. She decided it wasn’t in the best interest of her nor her team.

“My main goal is to keep my staff safe and healthy and to do my part for our community,” she says, adding that she wanted to see how the state’s share of confirmed cases was affected by its movement into Phase One of reopening. “I’m just listening to the governor every day and making decisions on what I’m hearing and what my gut’s telling me.”

Harding jumped at the chance to bring Cache back, opening its doors to the 33 percent capacity guideline on the first day he was allowed to do so, fortunate for a larger venue with which to safely and usefully conduct business. 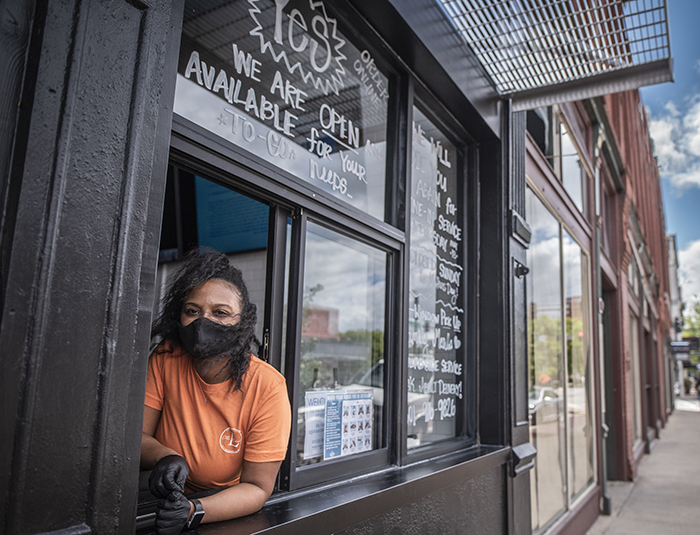 That aforementioned “good Saturday night” after his dining room reopened was pretty measly by Cache’s standards — around 70 diners all night. But Harding smiles, happy to be back in the swing of things with this endeavor, of his many. “It was really nice; there was a good vibe in the restaurant.”

The clouds continue to loom, though. As many restaurants as there are with (limited) seats available, there are just as many cautious diners — hesitant to make the first move, content with the “wait and see” approach. It’s an ironic role reversal, as it’s usually the patron who waits for a table to open at the restaurant. According to Harding, if the duration of this wait lasts too long, many establishments will have to close for good.

It’s a frustrating scenario, to say the least. Most of the restaurants that have elected to bring their dining rooms back have done so in a way that is just as unprecedented as the reason they were closed in the first place. At Cache, the staff is not only taking care of what is served on its customers’ plates but also making sure the atmosphere surrounding them is as clean as a hospital operating room. It is on a strict reservation-only policy to effectively police the number of people in the restaurant; every employee’s temperature is checked as soon as he or she walks in the door to clock in for work — if the thermometer reading is elevated, that associate is sent home but still paid as if they worked; gloves and masks are now a required part of the uniform for everyone. All this to keep its humble handful of customers as safe as possible.

But this behavior creates more cost, more training, more supplies to be ordered and less of the already scant earnings making it to the bottom line — which is still in the red, like most.

“There is not one person or business that is not affected,” Eldridge says. “We just have to be positive and support each other in the best way we can to get everybody back to some kind of normal — whatever that’s going to be.”

She has taken advantage of this time “off” creatively, in May bringing some of her staff back to help her prepare for the eventual reopening, which was May 26. Together, they are deep cleaning the restaurant, painting, repairing and planting flowers outside to refresh it anew.

As Semisonic sings, “Every new beginning comes from some other beginning’s end.”