A Baker Home Makeover – After 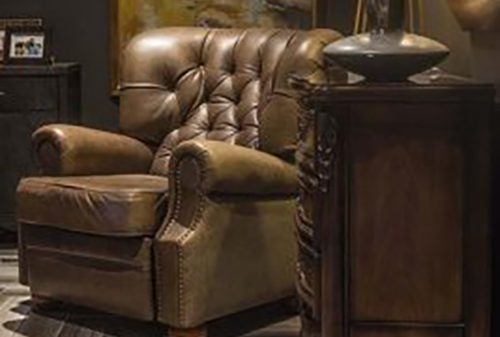 By Lisa Fischer | Photos by David Yerby
If you read last month’s AY magazine you saw the conundrum publisher Heather Baker was facing when interior designer/stylist Larry West, Jr., was giving her bedroom a makeover. Baker’s husband, Joel, was all for the fancy redo if, and only if, his Papa Bear chair remained. It was a marital dilemma of recliner-sized proportions. And who won? You can see in these photos. Heather at least has her massive Christmas decor to keep her smiling. (Check out next month’s AY Magazine with that spread.)
Despite losing this battle, both Bakers are immensely happy with what West whipped up. Heather says, “The biggest difference in the room was the flooring and the way Larry designed the room. It made it appear so much bigger. I feel like we have a sitting area and a sleeping area.” The flooring is from Akel’s Carpet One. She says, “They did a great job!” Her favorite pieces in the room are the nightstands. They have a unique texture, and West used different metallic features in the room including the bed-side tables. They are from Phoenix Interiors. 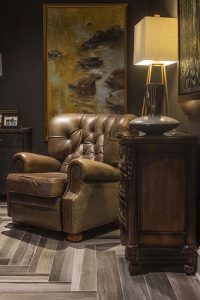 If she could narrow down her other favorites, she would include the rug from Cantrell Design Center and the tulips and throw pillows from Obsessions Interiors. They work well with the unique floor and have the pop of color, orange, West incorporated in the room. He also removed the expensive window treatments and replaced them with extremely affordable black-out shades.
By the time the magazine went to press, the Bakers had already decorated for the Christmas holidays. So, if having Christmas up for two and a half months doesn’t get on your nerves then having a Santa-sized recliner in your room won’t either.
RELATED: A Baker Home Makeover with Designer Larry West Jr.