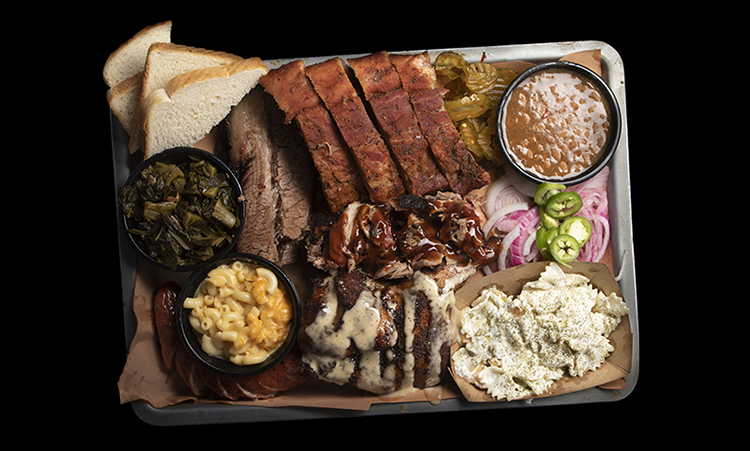 I come from a land devoid of barbecue. It’s true and it’s sad, but that’s the burden I have long carried as a carnivore.

In the place where I grew up, we produced what we called barbecue, but it was stuff that time and experience would lead me to understand was actually “grilling.” My dad wasn’t a cook – his virtues lay elsewhere, and he knew it – nor was he a paragon of patience. My mother would cook on the grill, but it was an exercise in efficiency, blistering hot dogs or browning burgers over white-hot Kingsford charcoal, brought dramatically to life in a conflagration of briquette, match and lighter fluid.

It was good and it felt like summer but, as I would one day discover, it wasn’t barbecue.

The first time I ever tasted something akin to the real thing was when my sister’s husband smoked ribs once in a converted oil drum. He’d cut a hatch at the base where he’d tend the coals and rigged grates on the inside. It took all day to cook the meat he’d had specially butchered and while he was a no-sauce devotee, the end result was as glorious and exotic as anything I’d eaten at that point in my life. I had begun a quest that’s lasted to this day.

I suppose if I had those ribs again, they’d be OK, but you can’t keep ‘em down on the farm once they’ve seen Paree and I’ve been in the South too long to be that easily impressed by any old ribs. There’s something we do down here that’s less kitchen chores and more of a culinary event. And nowhere does the crown shine brighter than upon the brow of a prize-winning pitmaster. 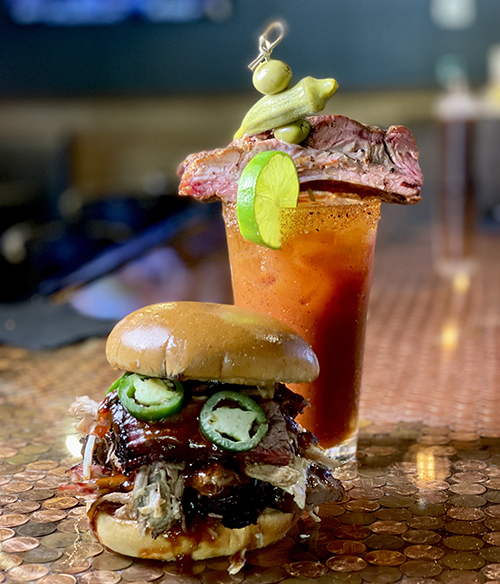 So you can imagine my delight when I learned one of the most interesting joints in town, Count Porkula, was in the process of building a restaurant right up the street from my house, thus proving God still held a good thought for me now and then.

“Love, man. We love it. That’s why we got into it,” said Walt Todd, who with Kelly Lovell, launched Count Porkula a few years back. “We didn’t start doing it as a business; we did it because we just like doing it. It’s always been part of my family’s life: every Saturday and Sunday we were cooking on the grill outside. We started it for fun and it just grew. Really, we do it because we just like it.” 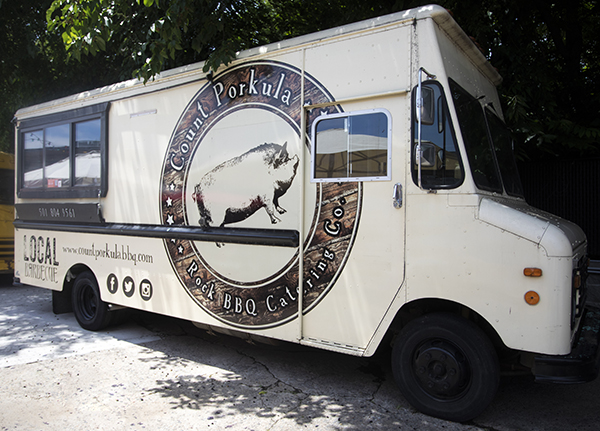 Todd and Lovell met through mutual acquaintances and bonded over their shared passion for barbecue. Bouncing ideas and cooking techniques off of each other, they moved from the minor leagues of their own backyards, to competition cooking, to a food truck, to being the anchor tenant at The Railyard in Little Rock’s East Village. Earlier this year, they opened their first brick-and-mortar in Maumelle and soon they will be christening location number two on my turf, just north of Mississippi and Markham.

Todd says the first dish the duo perfected was ribs, and “perfected” is an apt term. They favor baby backs over spare ribs, apply their own proprietary seasoning and smoke it over a blend of oak, pecan and cherry. Mastering brisket came next and remains the meaty measuring stick against which Todd compares any competitor. 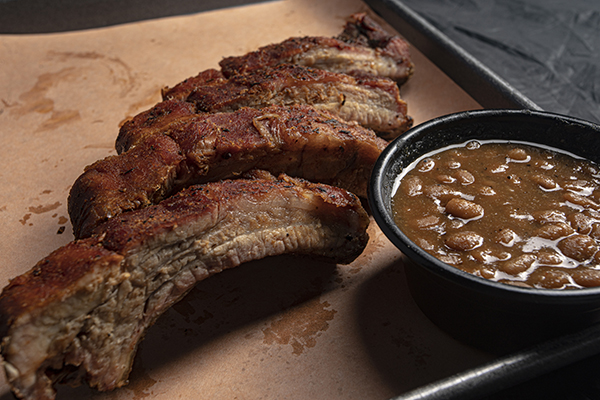 “I don’t know if we’re considered the Arkansas style, but we hope we’re in the discussion,” he said. “Where we’re geographically located, we get to sample influences. We do a Texas brisket. We put a white sauce on our chicken like they do in Alabama. We do a sweet vinegary sauce like Memphis, Kansas City and St. Louis. We draw from different regions and use those influences in what we make. We feel like we’re not really copying, we’re just bringing in stuff from different regions and making it our own.”

When and where barbecue began depends on how malleable your definition is. In some cases, the smoke was used as a deterrent against insects on drying meat. In other cases, such as with Caribbean barabicu, the smoke was the whole point. A colorful, if less-believable tale, concerns a native person tethering a goat to a tree only to have said tree struck by lightning in a sudden storm, cooking the beast on the spot.

But for all that’s unknown about the dish’s origins, its importance as a culinary art form is without question. Not unlike the blues or the yardbird, barbecue was perfected by the poor and enslaved. People allotted cheaper and tougher cuts of meat and were left to do with it what they could. There’s a reason it takes so damn long to cook a brisket or ribs–– it’s to break down the meat into the succulent joy that we know today. Do it too fast – as I did one ill-fated Father’s Day, a victim of my upbringing – and you’re left with a slab of kevlar.

“Number one thing; you better really, really, really pay attention to your meat. How it’s cooked. How it’s smoked,” said Joe Kleine, former NBA star and co-owner of Corky’s in Little Rock and North Little Rock. “It’s not complicated at all, but it requires attention. You know what I’m saying? You have to be attentive to what you’re doing if you want your meat tender.”

“It doesn’t take a rocket scientist to put a piece of lumber on a rotisserie. But if you forget, or if you cook it too high or cook it too long, then it’s extremely noticeable. That’s the thing you learn really quick; you’ve got to pay attention to what you’re doing.”

Kleine, who’s been in the barbecue business nearly 30 years, didn’t come out of basketball with a burning passion for opening a restaurant. But with the right encouragement and the right business partner, he’s turned the Memphis-based franchise into a household name in Central Arkansas. It’s an exhausting task and never more difficult than it is today; barbecue might have started out a simple man’s dish, but in today’s economy that’s far from the case.

“You think you’ve seen it all and we’ve come to find out we haven’t seen Jack, you know?” Kleine said. “Yesterday I was up in the kitchen and our freezers are full of sausage. I’m like OK, what’s going on? Our food distributor was like, ‘This stuff’s getting ready to almost double in price. So, you better load up.’ We had the same situation with chicken recently; one day I walk in there, and there’s hundreds of boxes of chicken. You’re just kind of sitting there going, ‘Good Lord.’”

In the face of such challenges, Kleine (whose favorite dish, by the way, is dry ribs which he sauces to taste) says the loyalty of the clientele, shown through thick and thin, are what sustains him. And barbecue fans are nothing if not loyal to the point of obsessed.

“I have people come up to me all the time and they’re like, ‘I like your barbecue, but you know, my ribs are better,’” Kleine said. “And I look at them and say, ‘You’re sitting on your patio cooking two slabs with a cold beer. If you can’t make better ribs than me, who’s trying to get out hamburgers and wraps and everything else, then something’s wrong.’

“I don’t take offense to that whatsoever, you know. Barbecue is like religion to a lot of people. We’re just blessed that they keep bringing us along and that we’ve been able to. 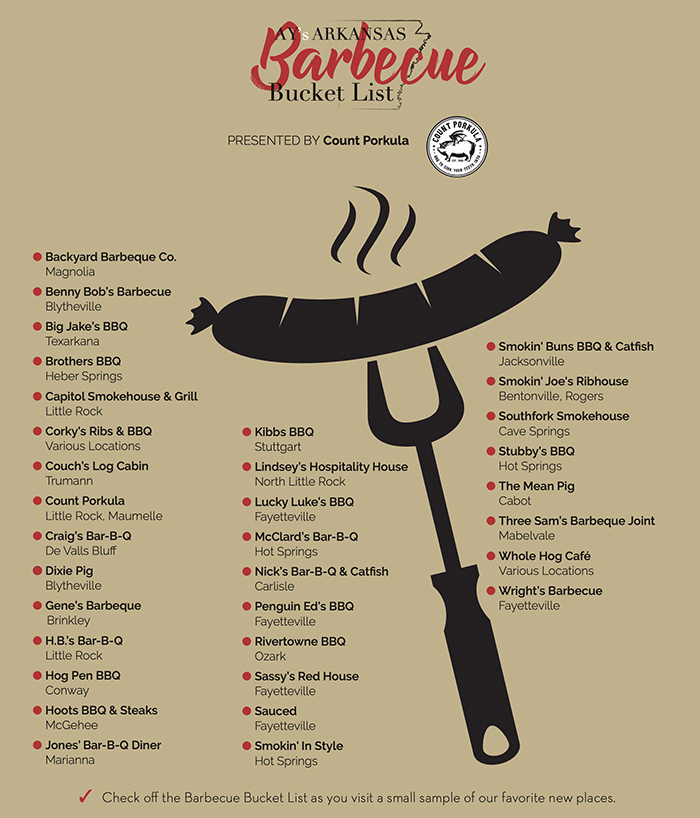