Bark Bar: Where the Pawty At? 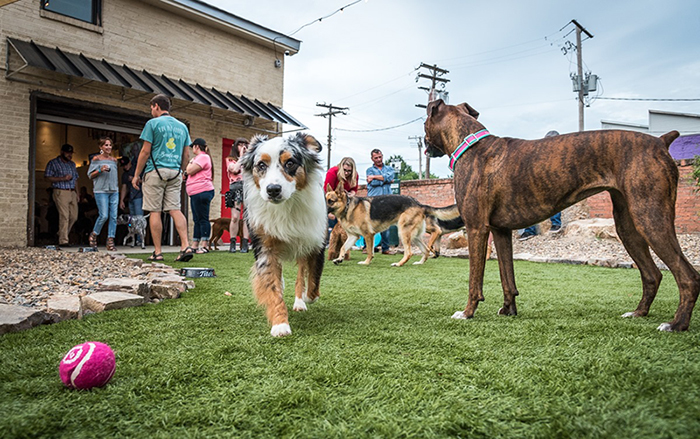 If one were to draw a Venn diagram comparing the personality types of dogs and humans, a lot of the crossover would involve sociability. It is in the center of these circles where Bark Bar can be found.

Not literally, of course. Technically, Bark Bar sits on the corner of 12th and Spring streets in downtown Little Rock; but figuratively, it occupies a center of relationships that have existed for centuries — the camaraderies of people with people, dogs with dogs, and the crossover in between.

It’s long been said that man’s best friend is the canine, but if that noun means anything less than “mankind,” it’s an offense to the masterminds behind Bark Bar, Elizabeth Michael and Cara Fowler, who have found a way to blend pooch and hooch in one of the most unique establishments the city has ever seen.

For the uninitiated, Bark Bar is the state’s first hybrid of an off-leash dog park mixed with a restaurant and bar — and that concoction is shaken, not stirred. It’s here where, for the past three years, Arkansans have fallen in love with the idea of spending date nights, girls nights, or any other social activity with their closest peers without having to leave their pets alone at home.

Which means that Michael and Fowler have done their jobs, because this is the very essence of how Fowler came up with the idea. 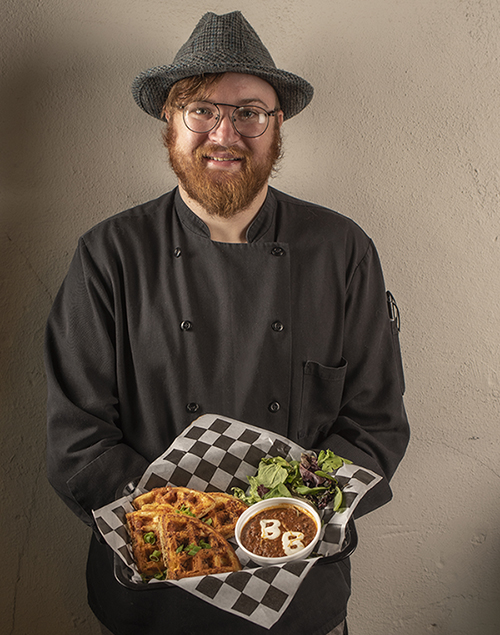 “It really just came about from having a job that required a lot of travel and did not allow me to be with my dog,” Fowler says. “That was what got the idea going. I visited a place in Austin, Texas, that had an outdoor concept, similar to Bark Bar, and that’s what got the wheels turning.”

And that’s about where the story diverts away from the similar song and dance of most startup ventures. Bark Bar is far from your average hangout, so it’s only fitting that its inception would follow suit.

Michael got a call from a friend one day while playing tennis. That friend and Fowler had nearly turned brunch into brinner, and needed someone who was not so “hydrated” to come pick them up.

As Michael tells this part of the story, Fowler interrupts with a laugh, “I’m trying not to sound like a lush here.”

“We own a dog bar! We own a dog bar!” Michael giggles back. Because they do. And what kind of story would the creation of a dog bar be without at least one instance of a tipsy brunch?

After Michael showed up to the cocktail hour, she says Fowler unveiled her idea. “Wouldn’t it be so great if we had our dogs here?” she remembers Fowler positing. 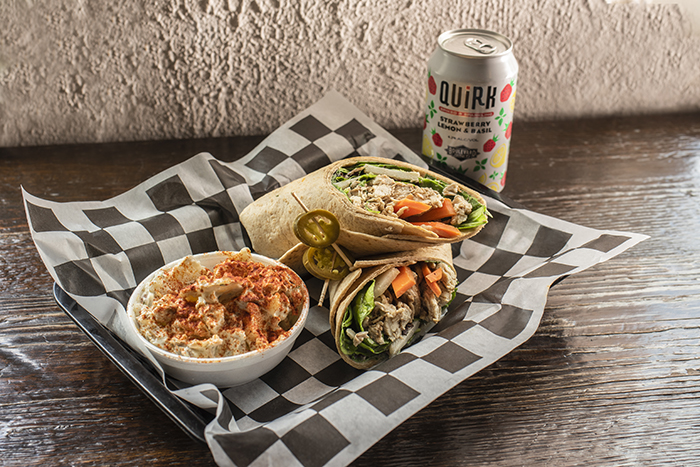 The expanded food menu is sure to impress its human patrons. (Jamison Mosley)

“I called her the next day about the Bark Bar idea,” Michael says. “And I said, ‘Cara, I found a place. It’s right downtown. It’s a church with a yard, and our friends own it. They’re dog lovers, and I think they would totally be all over this.’ And later on that day we went and looked at what would become Bark Bar.”

They would later open up a Kickstarter to help fund some of the location’s outside features. This was in 2017, well before Bark Bar had become the popular attraction that it is today. Even still, there was so much excitement for the concept that the duo cruised passed the initial fundraising goal of $5,500, raising more than $13,000.

“The response was overwhelming,” Michael says. “We were blown away.”

Thanks to the campaign, Bark Bar opened its doors with nearly 200 annual members. The Kickstarter was also what sparked the idea of having pictures of members’ dogs on the wall, which has since become one of its most popular aesthetic features.

But simply having an original idea and some property does not itself make for a successful endeavor over the long term. For Michael and Fowler, it is their hearts that have propelled Bark Bar to beyond just a neat notion. This passion shows through in a number of ways, including their attention to detail. For as much as the two like to have fun, they might enjoy puns even more.

Bark Bar is not constrained by the frivolousness of the human language. What might be known as a bartender elsewhere is regarded as a “bark-tender” there; the state it inhabits is “Barkansas”; cocktails are “cockertails”; and you can even book a private “pawty.” (To the 007 cocktail reference above, either Michael or Fowler might have already quipped, “James Pawnd.”) 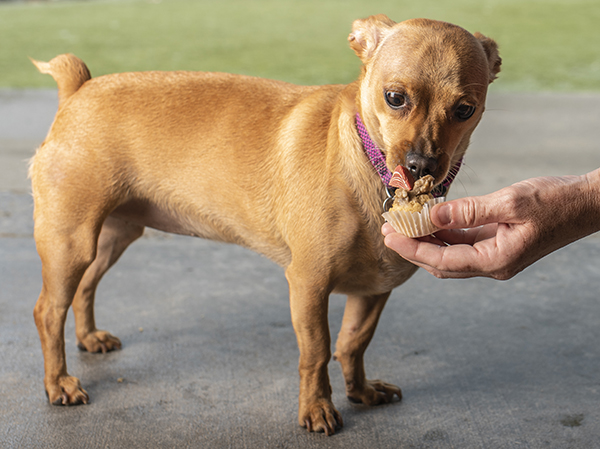 But for as lighthearted and posh a dog bar may seem on the surface, this devotion to the details and genuine care for customers has created an atmosphere that is bigger than anything the two founders could have dreamed of. Bark Bar’s members are that in name only, for they are really components of this tight-knit community — a family, as cliche as it sounds.

And when members of that family — the owners and staff — were faced with the strife of this COVID-19 pandemic, that community joined together to help Bark Bar make it through.

Not as equipped for curbside as some other local eateries, the spring and early-summer months presented significant challenges for the bar. But it found a way to adapt, offering, among other online orders, “doggy bags” that could be picked up curbside, which featured both human and dog treats.

“Anything that we were able to come up with as a way to pay the bills … the community that has formed bought it,” Fowler says. “Any way that they could support us, they did.”

“Even our some of our regulars that had moved away,” Michael adds, “they’d buy a T-shirt or a wine tumbler … It was pretty amazing.”

The loyalty of this Bark Bar community, as always, is about to be rewarded again for its support. “Cockertails” are back on the menu, as the dog-friendly joint has reopened to in-person patrons, safely. The bar was already sanitized with commercial-grade disinfectant every night, for the dogs. Now, it continues to utilize this practice, for the humans. They’ve switched to a contactless system, so dog-owners are now required to upload and verify animal shot records online, and in-house payment can also be done digitally. It’s adhered to all of the further guidelines set forth by the Centers for Disease Control and Prevention and the Arkansas Department of Health, and then some. 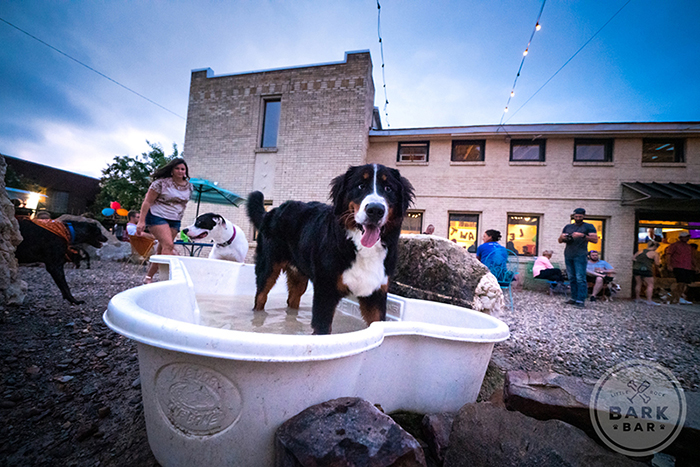 “Just like any other business, we’re ready for this all to be over with, but we’re not trying to rush through it in an unsafe way,” Michael says. “We want this to make sense for everyone — our staff, our customers and the dogs. All of them.”

Despite the pandemic, Bark Bar has also hired a new chef, Ryan Marsh, who is prepped to whip up an expanded menu, the likes of which has never been seen at the location. In the past, the restaurant has featured a limited menu featuring mostly hot dogs (pun definitely intended). It will still serve up plenty of those but in even more creative ways, such as the “pup kit” of three miniature hot dogs. It’s a fun little, “snacktivity” (as they say), where customers can build their own dogs at their table, with all the fixings. There will also be a variety of wraps, salads, and more. The menu will be updated with different options every two weeks.

“He’s coming up with some really creative and wonderful dishes,” Fowler says. “We’re happy to have him as a part of the team, and to offer Little Rock a fun new element of Bark Bar, which is some amazing food.”

And this month, on the week of National Dog Day (Aug. 26), Bark Bar will be celebrating its third birthday. Given the limited capacity that it now operates under, it will shy away from a one-day blowout when it would usually be filled to capacity all night long, instead spending the month spacing out its annual ceremony in what it is calling the Tournament of Chomp-ions. Every Saturday, Bark Bar will host competitions (essentially a doggy Olympics) such as races, tricks, fetching and agility. The winners will move on to the finals on Aug. 29, which will end with a medal ceremony and the crowning of the Golden Bone winner. The winning dog will receive a lifetime membership to Bark Bar and a $100 gift card for its humans. In-person celebrations will be governed safely, but the vast majority of the celebration will be done virtually. Fowler and Michael have a live-stream in the works, a way for at-home viewers to text in votes, and even more “pawfect” surprises.

Couples now married had their first dates at Bark Bar. It’s even been a host of both engagements and wedding receptions. “It’s the happiest place on Earth,” as its founders proudly proclaim. Anywhere else, that might be hyperbole. But not at Bark Bar.

“When you get here, you see how happy people are and how happy the dogs are,” Michael says. “You know where we are in the world, how much despair and discomfort there is, and how much sadness is in some people’s lives right now. I feel compelled to bring this happiness to people.”