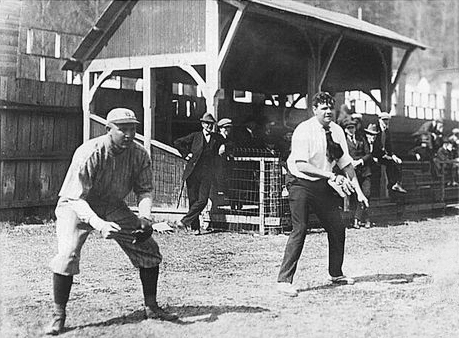 George “Babe” Herman Ruth had already established himself as a premier left-handed pitcher when his Boston Red Sox traveled to Hot Springs for spring training in 1918. In his four years in the major leagues, Ruth had won 65 games, and he gave up only two runs per game. He even pitched in the 1916 World Series, tossing a complete, 14-inning game and beating the Brooklyn Robins.

But it was one mighty swing of his bat at the Whittington Park in north Hot Springs on March 17, 1918, that convinced his manager that Ruth was better suited as a batter than a pitcher.

The Red Sox hosted the Brooklyn Robins — which took on the nickname “Dodgers” in 1931 — in the spring training exhibition game that day. Because of a depletion of players due to the Spanish Flu pandemic and World War I, regular Red Sox first baseman Stuffy McInnis had to play third and Ruth took over at first.

He threw a fastball to Ruth who then swung his heavy bat. It was on that day, in Hot Springs, that baseball history was changed.

The Red Sox had been coming to Hot Springs since 1901, lured by the therapeutic steaming waters of the bathhouses and the hilly terrain for vigorous hikes. Teams began holding spring training sessions in what became known as the Spa City as early as 1886 when Chicago White Stockings manager Cap Anson first brought his team to “boil out the alcoholic microbes” in his players, he would say. The White Stockings, which later became the Chicago Cubs, won the National League championship that year, setting a precedent for other teams to follow. 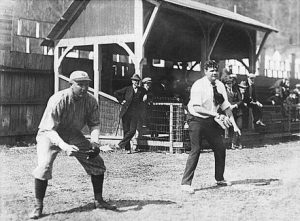 By 1911, 13 of the 16 teams in the American and National Leagues trained in the Spa City, says Mike Dugan, a baseball historian from Hot Springs.

“It became congested with teams,” he says. “At one time, there were nine teams playing in one stadium.”

Eventually, teams built two other stadiums in Hot Springs, including the Red Sox which eventually constructed the Majestic Field at the southern end of Hot Springs’ trolley line.

There were more things to do in Hot Springs than just playing baseball, which was a major draw for teams, Dugan says. When the sun set in Hot Springs and Whittington Park darkened, the lights came on in the town. Admittedly, most of those lights were in the town’s red-light district which featured a thriving choice of casinos, bars and brothels. 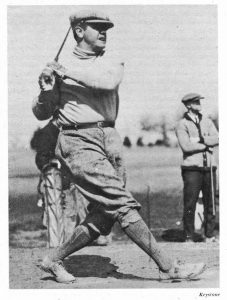 Ruth himself frequented the nightspots and often played three rounds of golf a day at the Hot Springs Country Club. In fact, Ruth was so enamored with Hot Springs that in 1926 the New York Yankees, who traded with the Red Sox for Ruth in 1920, banned him from ever returning to the Arkansas town. In 1925, Ruth became ill with a mysterious ailment, Dugan says. The press at the time said it was either appendicitis or a “stomach ache,” but others thought Ruth contracted a sexually-transmitted disease while in Hot Springs.

But in 1918, Ruth was healthy and, according to Glenn Stout, a Vermont author who wrote “The Selling of the Babe,” had become bored with pitching and wanted to play each day.

He stood at the plate that March 17 and watched Mamaux throw his pitch.

Ruth swung and connected, sending the ball deep toward right field. The ball cleared the outfield bleachers that sat on a bluff, soared across a road and landed in one of the ponds of the Arkansas Alligator Farm.

“It kicked up no end of commotion among the alligators,” Ed Martin wrote of the hit for the Boston Globe.

Dugan and Steve Arrison, CEO of the Hot Springs National Park Convention, used old photographs of Whittington Park and GPS technology to map out the trek of the ball’s path. It measured 573 feet, the longest home run by any professional baseball player. 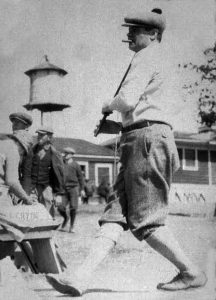 Three days later, Ruth hit four more over the stands during batting practice and on March 21, 1918, he hit yet another home run over the right-field fence, clearing the alligator farm and landing in a duck pond over 500 feet away.

“Spring training was not important to the newspaper reporters there,” Stout says. “Those home runs got a good response, though. Ruth was a pitcher, and there were no expectations for him at the plate. He batted ninth.

“But he was a peculiarity,” Stout adds. “It was kind of a fluke with all the circumstances that occurred in 1918 for him to bat every day. It was a happy accident.”

Before Ruth, fans generally followed their teams rather than players. Sure, there were the early “superstars” like Ty Cobb and Honus Wagner who gained attention, but Ruth was the first “transcendental figure” that fans began watching in mass.

“Hitting is an obsessive activity,” Stout says. “Even if you’re not hitting, you’re thinking about hitting. Pitchers gear up for the game every four or five games and then they’re not thinking. I think Ruth suffered from attention deficit disorder. He thought pitching was a royal pain in the butt. He was bored. He needed to be occupied.”

Ruth pitched in 20 games for the Red Sox in 1918, winning 13 of them. He also played in the outfield for 75 games and hit 11 home runs, tying him for the league lead with Tillie Walker of the Philadelphia Athletics. The Red Sox won the World Series that year, further extolling the virtues of training in Hot Springs.

A year later, Ruth hit 29 home runs to lead the majors, and a legend was born. When the Red Sox sold Ruth to the Yankees in 1920, the legend grew. Ruth hit 54 home runs that year. The next year, he clouted 59 homers and took the Yankees to the team’s first World Series.

Ruth’s Hot Springs mammoth shot was the catalyst for the development of the Hot Springs Historic Baseball Trail, a path that winds through the city and commemorates scores of baseball events.  The trail features 32 historical markers with digital technology that lets visitors hear accounts of the spots on their cell phones.

Henry Aaron, who unseated Ruth as the major league home run king in 1974, played in Hot Springs. Brooklyn Dodgers manager Leo Durocher was fired by the team owner in the spring of 1939 after he lost more than $600 gambling at the Belvedere Club. He was quickly rehired before the season began that year. New York Giants manager John McGraw was arrested at the Eastman Hotel for gambling in 1904 and pitcher Cy Young, the winningest pitcher in baseball with 511 victories, claimed the springs of the Garland County town prolonged his career.

“The city is very proud of its baseball heritage,” Arrison says. “The trail has been a huge success with locals and visitors alike. It’s been an effective tool in getting the word out about our city and its history.”

Whittington Park is no longer in Hot Springs. A parking lot for Weyerhaeuser Co. now sits where the field once was.

In 1933, the Red Sox moved the team’s spring training site to Florida. “The weather was better in Florida,” Dugan says.

A portion of the outfield grandstands remains in the bluff, a reminder to visitors of the old spring training days. A plaque also notes where Ruth’s home run landed in the alligator farm.

“Ruth had his moments on the mound,” Dugan says. “But it was that home run in 1918 that seemed to convince the manager of the Red Sox that he could be more valuable playing every day.”