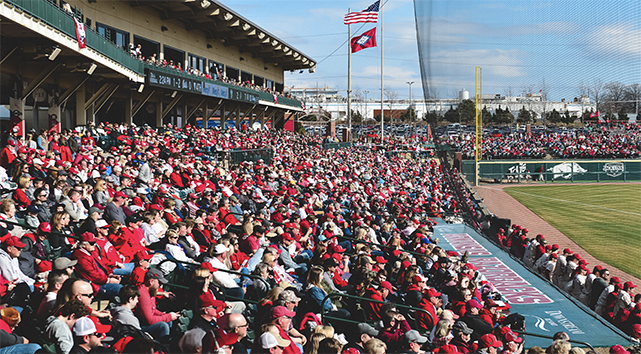 The Hogs football team seems to be under the right direction with the energetic Sam Pittman at the helm, but a reclamation project won’t happen quickly. Fans know there still may not be a lot to cheer about next year.

Eric Musselman has breathed new life into the basketball program, but Isaiah Joe’s knee injury made it all too apparent how fragile the Hogs’ roster is. Arkansas is riding a five-game losing streak as he prepares return Saturday against Missouri after a three-week absence. The Razorbacks’ NCAA hopes haven’t been completely dashed, but are on life support. Still, with what Musselman has accomplished in a year with a depleted roster and limited talent, there is reason to believe that with the aid of a strong recruiting class, Arkansas will be very good next year.

While fans wait for the two major sports to be competitive, the baseball team has captured their hearts – or at least many of them anyway. I’m sure there are still some fans who protest the Hogs simply because they don’t like baseball. (I don’t understand that.) But there are also others who have warmed up to the game because it is the one spectator sport that Arkansas has been consistently successful in over the past two decades.

Being at the stadium Sunday for the opening series finale against Eastern Illinois, it was easy to how much Hogs fans enjoy watching Hogs baseball. First of all, everyone loves a winner and a blowout win at that. Junior right fielder Heston Kjerstad made sure the Panthers didn’t have a chance as he keyed the series sweep. The slugger from Amarillo, Texas, hit two home runs (he had four for the three-game series), and added a double off the wall and six RBI. He exited the game after the double in the seventh inning, and the Hogs faithful gave him a standing ovation.

Kjerstad and Lonoke’s Casey Martin are bona fide stars and certain Major League prospects and worth the price of admission alone.

The weather wasn’t ideal, especially on a chilly Friday afternoon, but for February it wasn’t bad. So the results on the field were superb, the weather was decent, and the atmosphere the UA creates is second-to-none. From the scoreboard graphics, to the RBI Girls (baseball’s version of cheerleaders performing between innings) to the food trucks. It all adds to the enjoyment. As the father of two sons, I can’t think of any place better to spend time with your kids on the weekends. It’s all family-friendly fun.

And this year could be a season where the Hogs will not only qualify for the College World Series, but be in line to win the school’s first title. If you haven’t been to a game or follow the team, now is the time to jump on board.

It’s anyone’s guess when football and basketball will be back winning big. In the meantime, Van Horn’s Hogs offer the best medicine for ailing fans while they wait.