Batesville, Gateway to More than Just the Ozarks 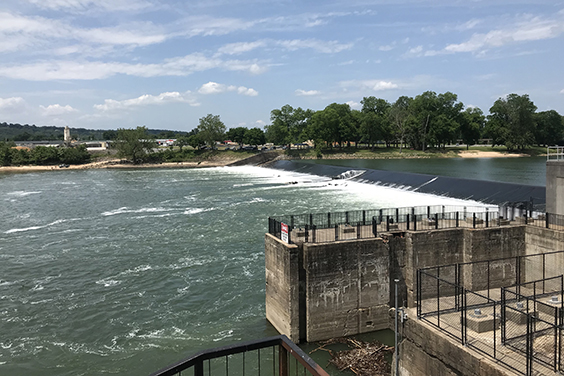 Batesville is more than just the oldest incorporated city in Arkansas and gateway to the Ozarks.
The city, which sits along the White River with a population of more than 10,700 is among the safest communities in Arkansas, according to Mayor Rick Elumbaugh. He said Batesville is among the top five safest cities in Arkansas.
Elumbaugh has been mayor for about 12 years and said the city has been hard at work to be a great place to work, live and play.
“We have tried to work on everything from infrastructure to quality of life,” the mayor said.
With Lyon College, the University of Arkansas Community College at Batesville, and four school districts, Batesville has immense educational opportunities, according to Elumbaugh.
Another great factor, in particular for retirees who make Batesville their home, are great health facilities with the White River Health System.
“It’s a very important aspect of any community, health and wellness,” the mayor said.
The locals have a number of favorite places to eat, including Josie’s Steakhouse, which sits on the White River and offers craft beer and a unique atmosphere, Elumbaugh said. It’s known for pastas, steaks, and a world famous bread pudding.
“I’ll put that up against anyone’s bread pudding,” he said.
From the best homemade rolls in town at Elizabeth’s Restaurant and Catering to some amazing casseroles at Natalie’s Cafe, Elumbaugh said the town has plenty of good food to go around.
Other popular choices include 109 Main and BIG’s.
Those interested in live music can hit up Fox Creek BBQ, which offers bands playing just about every Friday and Saturday night, according to the mayor.
“It’s a very good barbecue,” he said.
Josie’s Steakhouse and 109 Main also have special events with live music, Elumbaugh said.
With the completion of a new community center, Batesville now has a 105,000 square foot facility to host a multitude of local and state events, according to Elumbaugh.
“It really has been a game changer for our community,” the mayor said.
Economically, the community center has allowed Batesville to host everything from state and regional swim meets to basketball tournaments, the chamber of commerce expo, bank meetings and more with a multipurpose gymnasium that can accommodate 3,000, Elumbaugh said.
The community center also allows statewide committees and boards to host meetings.
“We’ve never had those venues available before,” he said.
But no town can be a solid home without kind people, and Elumbaugh said Batesville has plenty of them.
“The main thing is you’ve got friendly, giving people here,” he said.
When the city was working on revitalization projects downtown, individuals donated their time and money to help out block by block.
“It’s a giving community,” Elumbaugh said.
Kyle Christopher is tourism director for the Batesville Chamber of Commerce. He was born in town, and although he spent time in Houston, Christopher moved back to Batesville about 18 years ago.
He loves Batesville’s outdoor recreation and natural resources with the river.
“[These are] things you can’t quite find in the big city,” he said.
Looking around, Christopher said he didn’t want to move into nearby metro areas like Little Rock and Jonesboro. But he said Independence County is very centralized, and those that want a day in the city can easily make a short drive to visit one.
When it comes to improving Batesville, Elumbaugh said the town needs to grow its geographic boundaries. Another challenge Batesville faces is a lack of economic development funds, he said.
He’d also like to see more high paying technology jobs coming to town.
Elumbaugh said, “We need to make sure we plan for the future.”