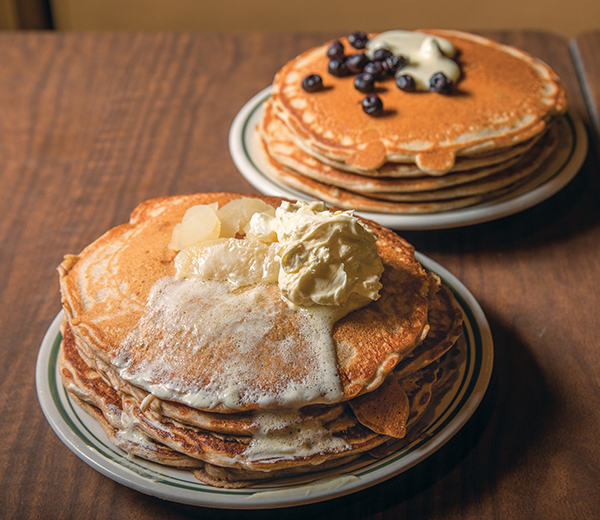 In times like these, what we crave most are things that time cannot change. The moments we can steal from under Father Time’s nose and, freezing all technology, we hold it in our hands, soak up and smell and taste. That unmistakable scent of a newborn; the racing pulse of first love; freedom and joy that’s often only fully realized as it shrinks to a dot in life’s rearview mirror.

It’s hard to understand where such memories go, much less how a good meal can instantly summon them back. Walk into The Pancake Shop, for instance, that venerable Hot Springs landmark, and you can be any age you want again with memory so close and vivid it’s like having another dining companion.

“For me, it’s just nostalgic, and it’s comforting and it reminds me of my mother,” says Keeley DeSalvo, whose family has owned the 81-year-old restaurant since 1966. “I grew up in that restaurant and not a lot has changed since my parents bought it. 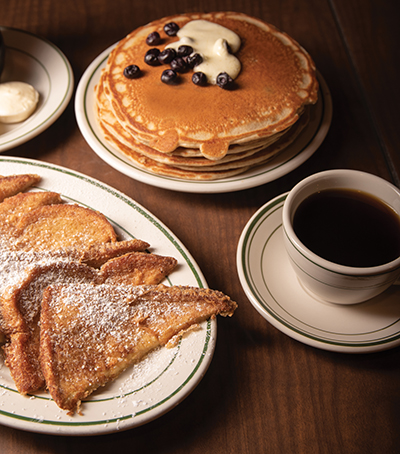 French toast at the Pancake Shop.

“There is something, especially in this day and age I think, about a consistent, constant, comforting feeling that people need right now. That makes me happy. That’s what I think I’m most proud of.”

If anyone should have built an immunity to the magic of breakfast — especially pancakes — it would be DeSalvo, having consumed as much of the family product as she has. Yet it never fails; bring her a stack of the plate-sized cakes (buckwheat with blueberries is her favorite) and time stands still.

“Our recipe is as old as the restaurant is. It hasn’t changed in all these years and that’s got to be the main secret. That, and then the heat that we’re able to get on that grill,” she says. “We serve our pancakes with whipped butter, and if you want hard pat butter we can certainly do that. We offer our maple syrup which has not changed since the restaurant started. Everybody loves our apple butter; a lot of people put apple butter on the pancakes.”

Contrary to its name, The Pancake Shop also churns out a mean plate of French toast, though not in the same quantity as the flapjacks. That, too, is given the heritage treatment, with a family batter that provides a gentle, loving crispness to bread thinner than the Texas toast you find in many restaurants. It’s great, but it doesn’t command its own section of the menu like the pancakes (find it grouped with the other toast). Nor, safe to say, does it line them up for an hour like the griddle cakes do, especially at peak times. 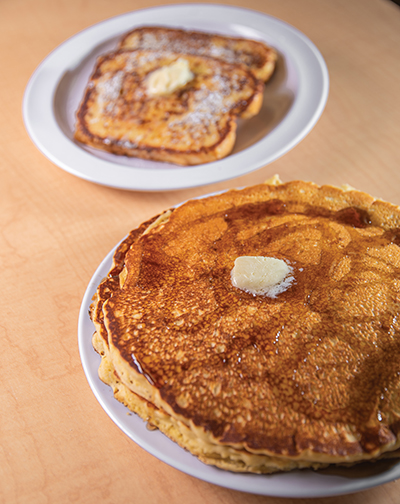 Which leads to the inevitable question: Are there ways to experience the legendary landmark without an excessive wait? Surprisingly, the answer is yes, with understandable caveats (the diner isn’t that big, and it’s only open 6 a.m. to 12:45 p.m., and that’s before COVID-19 kicked in, so adjust your expectations and be nice.)

“Generally, if you get there before 8 a.m. you’re not going to have much of a wait,” DeSalvo says. “In fact, ‘Get there before 8, no wait,’ is kind of our little moniker.”

A little common sense helps, too.

“This past year, things have been anything goes, and there’s no rhyme nor reason to it,” she says. “But in a perfect world, say on a Saturday or Sunday during the Oaklawn race time, you could have a line starting at 7 a.m. in the morning going all the way to till 1 p.m. in the afternoon. I mean we’ve got a constant turn of tables.”

And of course, it wouldn’t be Hot Springs without a little skullduggery when it comes to the Batter Line. Asked if there was a secret VIP list of those who have back door privileges, DeSalvo only smiles.

“I think I’m going to decline to answer that question,” she says.

In his 1984 HBO comedy special Carlin on Campus, George Carlin interspersed “telegrams” from international breakfast organizations representing pancakes, waffles and French toast badmouthing each other. And while we cannot directly quote the comic genius in a family magazine, the premise of groups dedicated to the advancement of morning carbs was itself ludicrous enough to be funny. 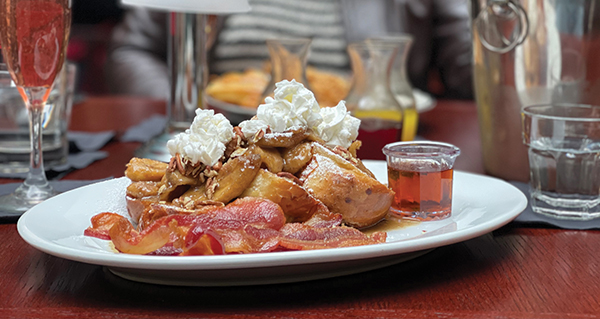 So, you can imagine the shock of discovering such entities actually exist, or at least they did. Pancakes have had not one but two fan groups — international chapters of Pancake Lovers Association and National Pancake Association. Waffles and French toast, while enjoying their own respective National Day, apparently have no such backing, which may be why they took the worst of it by Carlin all those years ago.

At any rate, all three of the dishes are much older than most people realize, and therefore subject to a variety of theories/legends as to who gets the credit for their invention. According to National Geographic, stone age man ground-up plant grains which were probably held together with water and “fried” on a hot rock, closer to a crepe. Apparently, Otzi the Iceman, who was discovered frozen in an Italian mountain pass in 1991, was found to have such cakes in his system when they thawed him out. Every major European civilization to follow had their version of the pancake until it finally landed in the New World where it was common fare in the American colonies.

Waffles seemed to spring from the same food family except much more recently, reports manyeats.com. They surmise that Crusaders picked up various flatbreads from the Middle East and took them back home in the Middle Ages. The origin of the honeycomb pattern is odd and in dispute: Some theories say a random blacksmith added the pattern while forging a cooking utensil. Another says a knight sat on his cake by accident and his armor left the marks that proved useful for holding whatever one poured onto it. In any case, it arrived in America with the pilgrims.

French toast has the strangest provenance, per Food & Wine. They say Romans perfected bread fried in butter and doused in honey and carried the sweet treat throughout the empire. As nations emerged over time, different cultures developed their own twists with the most frou-frou being in the royal courts of France. There’s also a less-accepted theory that puts the dish’s creation in the enterprising hands of American chef Joseph French in 1724. A better cook than speller, the story goes that he forgot the apostrophe-s and so the dish was christened “French toast” instead of “French’s toast.”

Wherever they came from, the three dishes are definitely here to stay in the American diet. IHOP alone reports selling 700 million pancakes a year; Waffle House reports it sells 145 waffles a minute, and French toast has enjoyed growth in consumption of more than 21 percent, annually.

There’s no wait to get into Littlefield’s Café, even at 9 a.m. on a Saturday, but everyone who enters gets the same greeting and most by first name. It’s just the clientele you’d expect who know a good place to eat, even without a sign out front. The neon “OPEN” is all they need to see. 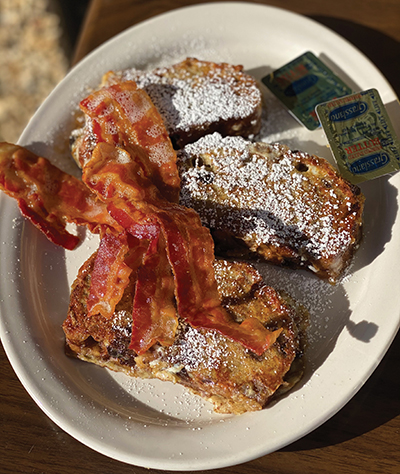 Places like North Little Rock’s Littlefield’s used to be everywhere on Main Street and the fact that there aren’t as many only adds to your delight over what you’ve found. Leave your pretense at the door — this is straight-ahead, get-the-job-done fare, done simple and well. It’s not as old at The Pancake Shop by any stretch, but it’s still a dream spot for owner Shelton Littlefield.

“Basically, my mom had wanted to go into the restaurant business for a while,” he says. “She and dad were looking around for places to either buy or rent. Then he got sick so my brother and I kind of took his spot and started helping her look for places. We started out at the old Starlite Diner on McArthur. We were there for a year, and we’ve been in our current location ever since. It’s just her and I now.”

The mother-son tandem quickly found their groove, and they’ve stayed with it — breakfast and lunch, 8 a.m. to 2 p.m., every day but Monday. And about those breakfasts: Take care when ordering anything with the pancakes. Not because they’re not great, but because they’re as big as Frisbees.

“Honestly, we get a lot of reaction to the size of them because we don’t do the small pancakes. We basically do it the size of the plate,” he says. “I’ve taken orders out to tables and they go, ‘Oh my gosh! The pancakes are so big!’ And we’ve had people that can’t finish it. Like our Big Boy Breakfast — you get the short stack, which is two pancakes, and they can’t make it through it. It’s funny.”

There’s an art in making something so basic as griddled batter taste so good and whatever that is, Littlefield’s has caught it. You feel it in the air as much as taste it on the plate. Maybe it’s the coffee cup that never runs dry. Maybe it’s the house-made gravy ladled over biscuits or the waitstaff — a mix of longtimers and teenagers in first jobs — that lend just that little extra something. The appeal is universal and satisfying.

“We get a lot of people that come from Little Rock who are searching for breakfast. We’ll get them coming in from Cabot, from everywhere. It’s awesome,” Littlefield says. “It’s just an awesome experience to meet new people. We’ve got airbase people coming in that are from out of state that want breakfast. We get to meet people from New York and all over the country.

“It’s an awesome thing to be able to give people the experience that they want and also meet these new types of people.” 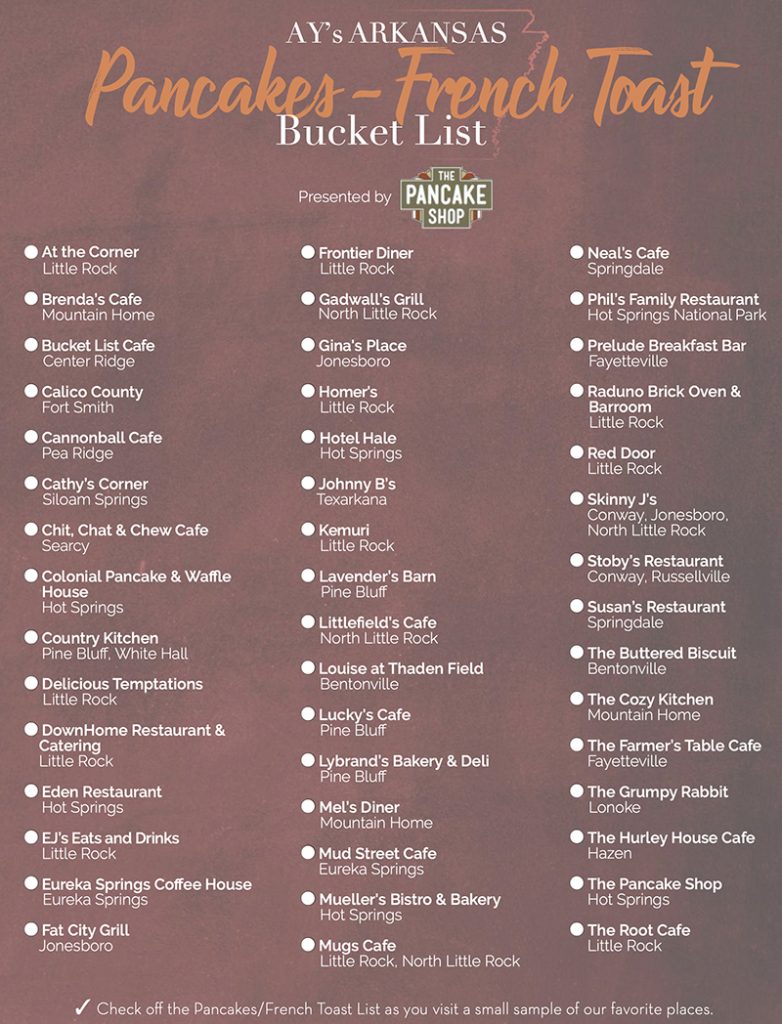