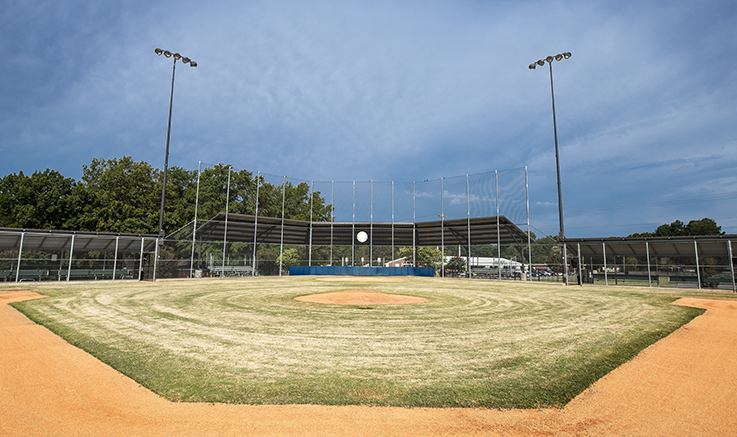 On the bend of I-40’s elbow sits the city of Conway. To its east flows the Arkansas River. To the north winds the Highway 65 trail to Branson. To the south sits its namesake lake. At its heart, baseball?

It is no small feat, establishing oneself as a haven for the sport deemed “America’s pastime.” But in just a few short years, that is exactly what the city of Conway has done. A quote often misconstrued from the 1989 hit Field of Dreams immediately comes to mind — “If you build it, [they] will come.” Conway sowed the sunflower seed shelled fields and are reaping the benefits, exponentially. They built it, and people came.

“We host more baseball tournaments than any other city in the state,” boasts Rachel Shaw, director of destination marketing for the Conway Chamber of Commerce. “We’re the largest city for baseball in all of Arkansas, and we are in the top five nationally for USSSA (United States Specialty Sports Association) baseball tournaments.

“That was really a partnership with our city parks department. They really built up the relationship with the owner of the baseball events, and we’ve just continued to work with them over the years, and try and do whatever we can to make sure that [the events] continue to stay in Conway.”

For the past decade (most substantially over the latter portion of it), families from all over the state and beyond have traveled to Conway for these youth baseball tournaments that encompass virtually every age group. From the USSSA to American Legion Baseball, Conway has become the proverbial home dugout for baseball-related events, establishing itself as a bit of a tourism hotspot.

And attracting thousands of visitors per year is priceless for the businesses around town. Transient guests traveling into a city almost always stay at local hotels, eat at local restaurants and shop at local stores. This baseball heavy tourism has become the backbone of Conway’s hospitality sector.

“Sports teams make up a significant portion of our leisure travelers, and baseball is one of the largest contributors to that,” says Mary Sternberg, director of sales at the Fairfield by Marriott in Conway. Sternberg has worked this market since 2011 and has seen the ebbs and flows of the corporate and natural gas sectors that have also brought in hotel travelers in significant numbers over the years. Each has been volatile and unpredictable, but not baseball.

“[Baseball travel] just gets bigger, and bigger every year,” Sternberg goes on to say. “In the spring and summer seasons, there is a baseball tournament filling up our hotel almost every weekend.”

Baseball’s explosion in Conway has paralleled a larger motif for the entire city; across the board growth looking like the mushroom cloud that follows such a blast. Chicken and egg debates of “what came first,” aside, Conway is booming.

“Conway [has] grown from the 1990s to now, more than it had grown from the 1890s to the 1990s,” Shaw says proudly. “I think that Conway’s just going to continue to grow. And we don’t really see ourselves as much of a tourist destination. We know why people come here, they come here for the colleges; they come here for youth sports; they come here for some special events. But we want to make sure that every experience that people have here is a positive experience and that they see how great Conway is when they come to visit for those specific things, and then end up coming back to visit our downtown that is constantly growing and changing. We have a lot of new developments taking place in and around downtown right now.”

Above all else, that might be what makes the city of Conway special; it has been able to capitalize on commercialism without surrendering its true self. Sure, it has become a tourism hub, but not a stereotypical, shallow landmark. As many Conway residents will say, it still has the soul of a small town with as much to do as a big one.

As for how Conway might look in another decade, Shaw is excited at the prospect. “I would say in 10 years, I hope that every storefront is full and that there are people out and about, enjoying Conway,” she says. “And, that we continue to grow.”